Iran warns US not to interfere with Venezuela oil shipment 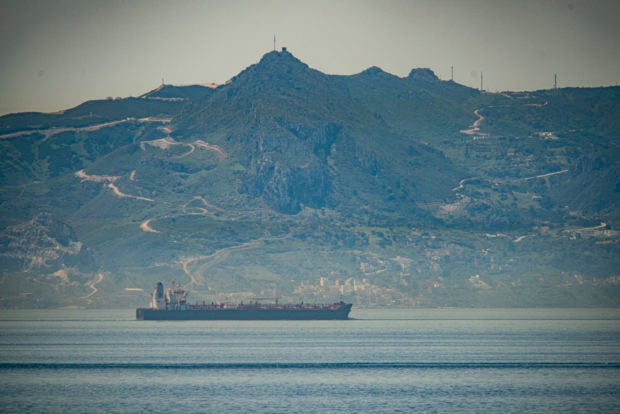 A view of the vessel the Clavel sailing on international waters crossing the Gibraltar stretch on Wednesday, May 20, 2020. Five Iranian tankers likely carrying at least $45.5 million worth of gasoline and similar products are now sailing to Venezuela, part of a wider deal between the two U.S.-sanctioned nations amid heightened tensions between Tehran and Washington. (AP Photo/Marcos Moreno)

TEHRAN, Iran — Iran’s president on Saturday warned the United States not to interfere with a shipment of oil bound for Venezuela after the South American nation said it would provide an armed escort for the tankers.

In a statement posted on his website, Hassan Rouhani said the United States had created “unacceptable conditions” in different parts of the world, but that Iran would “by no means” be the one to initiate conflict.

“If our tankers in the Caribbean or anywhere in the world face any problems caused by the Americans, they will face problems as well,” he added. “We hope the Americans will not make a mistake.”

Rouhani made the remarks in a call with Sheikh Tamim bin Hamad Al Thani, the ruling emir of Qatar, which has close relations with both Iran and the United States.

The five Iranian tankers now on the high seas are expected to start arriving in Venezuela in the coming days. They are carrying gasoline to alleviate severe fuel shortages in the country that have caused days-long lines at service stations, even in the capital, Caracas.

Venezuela said Wednesday that planes and ships from the nation’s armed forces will escort the tankers in case of any U.S. aggression.

President Donald Trump imposed heavy sanctions on Iran after he withdrew the U.S. from Tehran’s 2015 nuclear deal with world powers. The administration has ramped up sanctions on Venezuela to try to force President Nicolás Maduro from power.

A force of U.S. vessels, including Navy destroyers and other combat ships, patrol the Caribbean on what U.S. officials call a drug interdiction mission. Venezuelan officials paint them as a threat, but U.S. officials have not announced any plans to intercept the Iranian tankers.