Time running out on the last US-Russia nuclear arms treaty

WASHINGTON — Time is running out on an arms control treaty that, if it’s allowed to expire, will leave the world with no legal restrictions on U.S. and Russian nuclear weapons for the first time in nearly half a century.

If President Donald Trump doesn’t extend the New Strategic Arms Reduction Treaty — only remaining U.S.-Russia arms control pact — or succeed in negotiating a replacement treaty, it will expire on February 5. That’s just 16 days after Trump begins a second term or his successor is sworn into office.

Russia has offered to extend New START for up to five years, but Trump is holding out. He thinks China, which is expected to double its stockpile of nuclear weapons in the next decade, should have to sign on to a nuclear arms control accord, too. 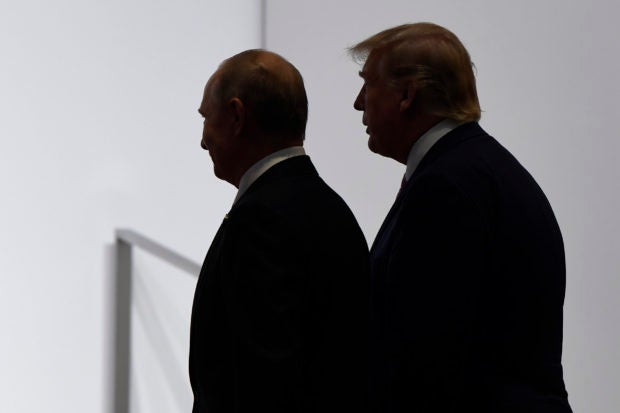 In this June 28, 2019, file photo, President Donald Trump and Russian President Vladimir Putin walk to participate in a group photo at the G20 summit in Osaka, Japan. The Trump administration is notifying international partners that it is pulling out of a treaty that permits 30-plus nations to conduct unarmed, observation flights over each other’s territory — overflights set up decades ago to promote trust and avert conflict. The administration says it wants out of the Open Skies Treaty because Russia is violating the pact and imagery collected during the flights can be obtained quickly at less cost from U.S. or commercial satellites. (AP Photo/Susan Walsh, File)

The future of New START was further called into question with Trump’s announcement Thursday that the U.S. intends to withdraw from another treaty that permits observation flights over the U.S., Russia and more than 30 other nations.

Trump voiced his desire for a three-way arms control agreement months ago, but that effort is still in the starting blocks.

Marshall Billingslea, who was appointed last month as the president’s special envoy for arms control, said Thursday that he had his first secure phone call with his counterpart in Moscow, Russian Deputy Foreign Minister Sergei Ryabkov. Billingslea said they agreed to meet, talk about their objectives and find a way to begin negotiations.

“Suffice to say, this won’t be easy. It is new,” Billingslea said, adding that the U.S. fully expects Russia to help bring China to the table.

Russian officials and many arms control experts agree that China, as a rising power, should be part of a nuclear arms accord, but they are eyeing the calendar.

“It’s really hard to see how, in the midst of a pandemic that would make actual in-person negotiations quite difficult, you’re going to get something done and ratified and in force before the New START treaty expires on Feb. 5, 2021,” said Alexandra Bell at the Center for Arms Control and Non-proliferation.

They note how Trump’s reelection campaign, the coronavirus pandemic and the economic problems it has created are consuming a lot of time. Negotiating complex nuclear accords can take years, and even the president, who has blamed Beijing for not stopping the spread of the virus, has said he’s doesn’t want to talk to President Xi Jinping right now.

A spokesman for the Chinese Foreign Ministry, Geng Shuang, said in January that China has “no intention to participate” in trilateral arms control negotiations. Billingslea, however, is optimistic that Beijing will want to join in and be seen as a world power.

New START imposes limits on the number of U.S. and Russian long-range nuclear warheads and launchers. If it were to collapse, it would be the first time in 50 years that the U.S. does not have the ability to inspect Russian nuclear forces, said Rose Gottemoeller, a former undersecretary of state for arms control and international security.

“Every time they (the Russians) take a missile out of a silo and take it to a maintenance facility, they have to notify us that that missile’s going to move. … The intelligence community is simply going to have a much harder time knowing what’s going on,” she said.

But Trump has accused Russia of not living up to agreements. He cited Russian violations in his announcement Thursday that the U.S. would withdraw from the Open Skies Treaty. While the U.S. has officially given its required six-month notice of withdrawal, Trump hinted that he may reconsider and stay in the pact.

Trump also blamed Russian violations for his decision last year to pull out of the 1987 Intermediate-Range Nuclear Forces Treaty that banned the production, testing, and deployment of intermediate-range land-based cruise and ballistic missiles.

Russia’s Foreign Ministry on Friday accused the U.S. of aiming to dismantle security pacts. Withdrawing from the Opens Skies Treaty “fully fits into (the U.S.) line on the destruction of the entire complex of agreements in the field of arms control and confidence-building in the military field,” the ministry said.

Senior U.S. administration officials say Trump’s willingness to withdraw from treaties shows he is serious about compliance and is evidence of how prominently arms control verification and compliance will feature in New START talks.

“We are not in the business of negotiating new agreements, or extending old ones, if we cannot be assured that the other parties will hold up their end of the bargain,” Billingslea said. “When it comes to Russia, we have little reason to be confident. Russia’s track record is, to be frank, abysmal.”

The U.S. and Russia have about 91 percent of the world’s nuclear warheads, according to the Federation of American Scientists. The U.S. has 3,800 in its stockpile and Russia has 4,310. China has 320 nuclear warheads, although the Defense Intelligence Agency predicted last year that China was likely to at least double the size of its stockpile during the next 10 years.

With the U.S. presidential election just five months away, the question is whether Trump has enough time to negotiate a grand, three-way deal, especially given China’s reticence to participate.

Timothy Morrison, an arms control expert and former adviser to Trump on Russia and Europe at the National Security Council, said at a nuclear weapons forum in January that as the months go by, Trump may be “left with a binary question of extend or not extend” New START.

“Time is not on the president’s side,” he said.