Hong Kong's controversial security law: What is it and why does China want it? | Inquirer News
Close
menu
search 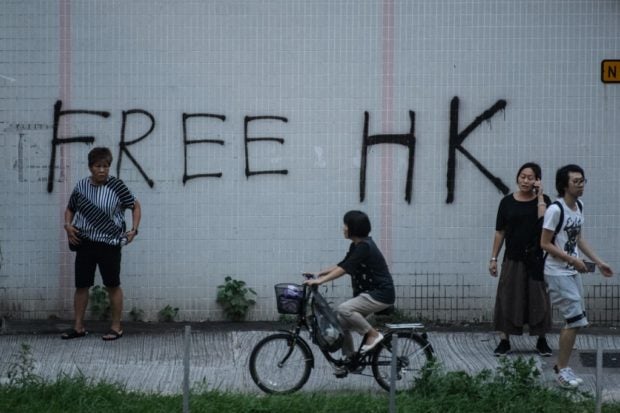 In this August 10, 2019, photo, a cyclist rides past graffiti that reads “Free HK” in the Tai Wai area of Hong Kong, as protesters take part in demonstrations against a controversial extradition bill. – China’s parliament on Friday, May 22, 2020, proposed introducing a new security law in Hong Kong, a move expected to fan fresh protests in the semi-autonomous financial hub. (Photo by Anthony WALLACE / AFP FILE)

The proposal, which has been condemned by the United States and Hong Kong pro-democracy figures as an assault on the city’s freedoms, was submitted for deliberation on Friday.

Why has China moved to impose the law?

Article 23 of Hong Kong’s mini-constitution, known as the Basic Law, says the city must enact national security legislation to prohibit “treason, secession, sedition (and) subversion” against the Chinese government.

Hong Kong has been trying to introduce a law for years but pro-democracy demonstrations that paralyzed the city in 2019 have pushed the issue up the agenda and galvanized Beijing.

How do people in Hong Kong feel about it?

Article 23 has never been implemented due to public fears it would curtail Hong Kong’s cherished rights, such as freedom of expression and the press.

Those liberties are unseen on the mainland and are protected by an agreement made before Britain handed Hong Kong back to China in 1997.

An attempt to enact the clause in 2003 was shelved after half a million people took to the streets in protest against it. Then security chief Regina Ip had to resign following the failure.

China’s move would authorize its lawmakers to circumvent Hong Kong’s legislature and directly enact the legislation at a future date.

What will happen next?

China’s legislature is expected to rubber-stamp the draft resolution on Thursday, the last day of the annual parliamentary gathering before details are fleshed out next month at another meeting of the NPC’s Standing Committee.

Wang said the law would then be implemented locally, an unprecedented move that could spark a further wave of protests.

In a statement Friday, Hong Kong’s leader Carrie Lam vowed to “fully cooperate” with Beijing over the law.

The Hong Kong government will “complete the legislation as soon as possible to discharge its responsibility of safeguarding national security,” said Lam, who is attending the NPC.

Jimmy Sham, leader of the Civil Human Rights Front, which organized the million-person rally that kicked off 2019’s unrest, appealed Friday for millions to come out on the streets once again.

What does this mean for ‘One country, Two systems’?

Pro-democracy lawmakers have said the legislation marks the end of ‘One country, Two systems’ – a reference to the handover agreement that has given Hong Kong a limited form of autonomy since returning from British to Chinese rule in 1997.

Even before the proposed security law, there were fears that Beijing was steadily eroding those freedoms.

“They (Beijing) are now completely walking back on their obligation owed to the Hong Kong people.”

Amnesty International warned the legislation posed “a quasi-existential threat to the rule of law in Hong Kong.”