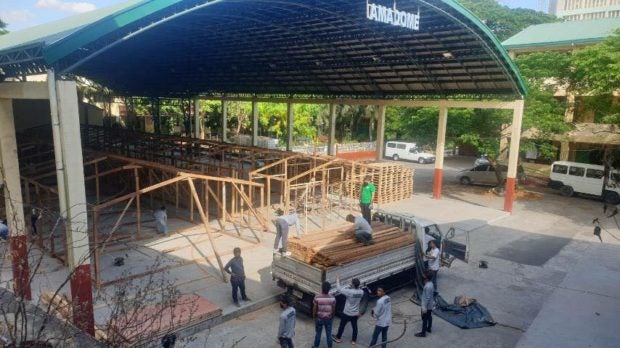 Construction for quarantine facilities are also underway at Delpan quarantine facility and Araullo High School to boost the city government’s response against coronavirus. (Photo from the Facebook page of Mayor Isko Moreno)

MANILA, Philippines — The government is looking at scaling down its quarantine measures into “zones” based on the number of its coronavirus disease 2019 (COVID-19) infections, Secretary Carlito Galvez Jr., chief implementer of the country’s response against the virus said Friday.

This way, Galvez said specific areas that are badly affected by the coronavirus will be immediately addressed.

(The zoning concept will cordon off or areas and compounds affected will be placed on lockdown.)

(We have to have a direct impact immediately and that our rapid response will focus on affected areas.)

Galvez explained that these areas will be determined based on their incident and doubling rate of cases.

Earlier, Interior and Local Government Secretary Eduardo Año also floated the possibility of placing not only barangays but also subdivisions under lockdown.

The government eased the quarantine measures in several areas to allow businesses to partially reopen in order to cushion the pandemic’s impact on the economy.

Metro Manila was among the areas placed under modified enhanced community quarantine until May 31.