Brazil expands use of unproven drug as virus toll rises

RIO DE JANEIRO  — President Jair Bolsonaro unveiled rules Wednesday expanding the prescription of chloroquine, the predecessor of an anti-malaria drug promoted by U.S. President Donald Trump, for coronavirus patients despite a lack of clinical proof that it is effective. 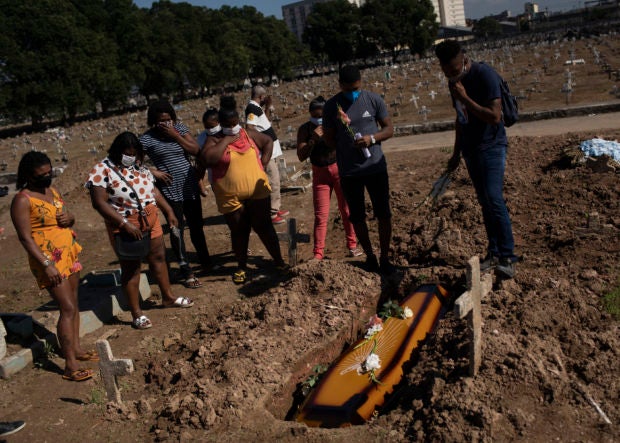 Relatives attend the burial of Vandelma Rosa de Almeida, 66, whose death certificate states is suspected of having died of COVID-19, at the Caju cemetery in Rio de Janeiro, Brazil, Wednesday, May 20, 2020. (AP Photo/Silvia Izquierdo)

Chloroquine was already being used in Brazil for COVID-19 patients who are hospitalized in serious condition, and under the new regulations, it can be given to people with lighter symptoms such as abdominal pain, cough or fever, according to the Health Ministry.

“There is still no scientific evidence, but it is being monitored and used in Brazil and worldwide,” Bolsonaro, who has likened the virus to a “little flu” and feuded with local governments over their stay-at-home measures, said via his official Facebook page. “We are at war: ‘Worse than being defeated is the shame of not having fought.'”

More than 291,000 coronavirus cases have been confirmed in Brazil, the third most in the world after the United States and Russia, and the announcement came a day after the country’s single-day death toll from the virus hit a new high of more than 1,100. Officials said Wednesday that 888 more died in the subsequent 24 hours.

Trump has promoted treating COVID-19 with hydroxychloroquine, a variant considered less toxic and more effective than chloroquine, and he announced Monday that he was taking the drug as a precaution. No large, rigorous studies have found either drug safe or effective for preventing or treating the virus.

Bolsonaro, a conservative populist and nationalist, has long expressed admiration for Trump and enthusiasm for chloroquine. Brazil’s new guidelines were approved by interim Health Minister Gen. Eduardo Pazuello, who had no health experience prior to becoming the ministry’s No. 2 official in April.

Pazuello’s appointment to the top job came after then-Health Minister Luiz Henrique Mandetta was fired last month for publicly supporting state governors who shut down nonessential businesses and adopted other measures against the virus, and after Mandetta’s replacement, Nelson Teich, resigned last week. Teich did not explain why he left, but he had publicly disagreed with Bolsonaro over chloroquine.

Speaking to a group of street cleaners in the capital, Brasilia, Bolsonar suggested Wednesday that he has no plans to replace Pazuello: “This one is going to stay for a long time.”

Officials say nearly 19,000 people have died of the coronavirus in Brazil so far, and experts warn that low testing rates mean the true number of cases is likely far higher.

Health systems in various states have gone over capacity, with overwhelmed intensive care units unable to take in new COVID-19 patients, and experts say rising numbers of people are dying at home.

Cemeteries are using backhoes to dig hundreds of graves at a time, and Manaus in the heart of the Amazon rainforest is burying the dead in mass graves.

Also Wednesday, Bolsonaro announced the resignation of Culture Secretary Regina Duarte, a former soap opera star who was recently criticized by many in the opposition and the arts community for downplaying torture during the 1964-1985 dictatorship and who had warned against the dangers of “unbearable morbidity” around the virus.

Bolsonaro continues to oppose governors and mayors who are renewing stay-at-home recommendations or introducing stricter measures.
The former army captain has argued in favor of restarting the economy, even though experts say Brazil has yet to reach the peak of the pandemic.

He believes that containment measures are too painful in a country where tens of millions of workers depend on low-paid jobs in the informal sector.

Several large observational studies, including one in U.S. hospitals for veterans, have not found benefit from hydroxychloroquine for treating COVID-19.

Earlier this year scientists in Brazil stopped part of a study of chloroquine after seeing heart rhythm problems among patients taking a higher of two doses being compared.