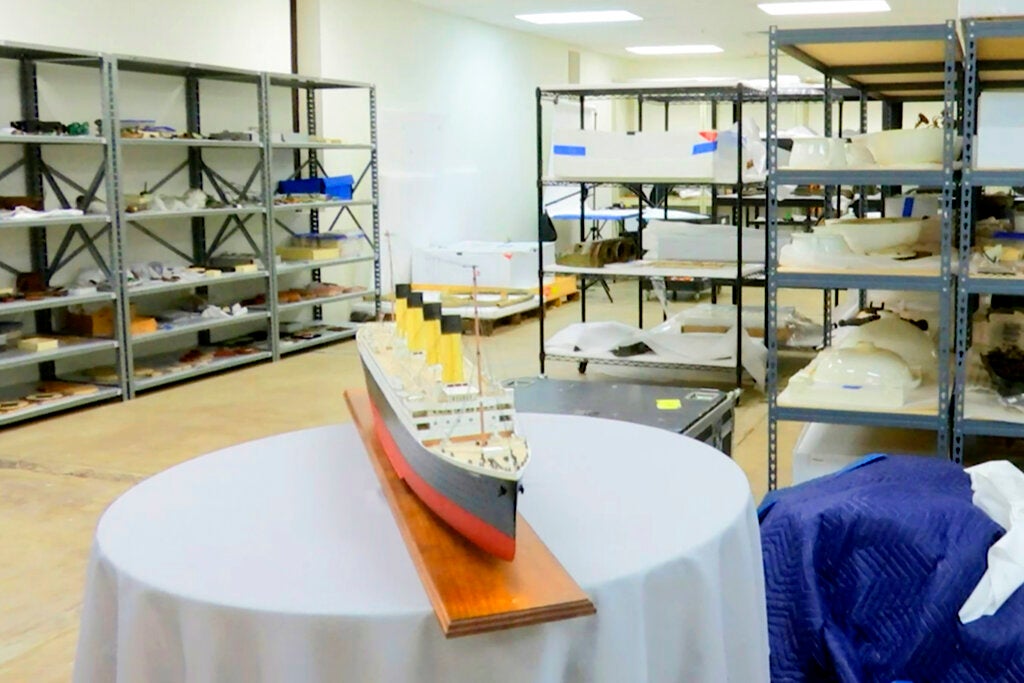 Artifacts recovered from the Titanic sit on shelves at a storage facility in Atlanta. (AP)

NORFOLK, Virginia — A federal judge in Virginia has ruled that a salvage firm can retrieve the Marconi wireless telegraph machine that broadcast distress calls from the sinking Titanic ocean liner.

In an order released Monday, U.S. District Judge Rebecca Beach Smith agreed that the telegraph is historically and culturally important and could soon be lost within the rapidly decaying wreck site.

Smith wrote that recovering the telegraph “will contribute to the legacy left by the indelible loss of the Titanic, those who survived, and those who gave their lives in the sinking.”

Smith is the maritime jurist who presides over Titanic salvage matters from a federal court in Norfolk. Her ruling modifies a previous judge’s order from the year 2000 that forbids cutting into the shipwreck or detaching any part of it.

Smith’s order is a big win for RMS Titanic Inc., the court-recognized salvor, or steward, of the Titanic’s artifacts. The firm recently emerged from bankruptcy and is under new ownership.

The Titanic had been traveling from England to New York when it struck an iceberg and sank in 1912, killing all but about 700 of the 2,208 passengers and crew.

The National Oceanic and Atmospheric Administration, which represents the public’s interest in the wreck site, fiercely opposes the mission. NOAA argued in court documents that the telegraph is likely surrounded “by the mortal remains of more than 1,500 people,” and should be left alone.

The company said it plans to exhibit the ship’s telegraph with stories of the men who tapped out distress calls to nearby ships “until seawater was literally lapping at their feet.”

“The brief transmissions sent among those ships’ wireless operators, staccato bursts of information and emotion, tell the story of Titanic’s desperate fate that night: the confusion, chaos, panic, futility and fear,” the company wrote in court filings.

The proposed expedition also has been controversial among some archaeological and preservation experts, and the firm may face more legal battles before salvage vehicles can descend nearly 2.5 miles (4 kilometers) to the bottom of the North Atlantic.

NOAA says the expedition is prohibited under federal law and an international agreement between the United States and the United Kingdom. Those restrictions emerged in the years after the court’s 2000 order.

In her ruling, Smith acknowledged NOAA’s arguments. But she said the only matter before the court was the previous order made by the judge who preceded her.

She wrote that NOAA is not a formal party in the case. And she said her ruling does not address the constitutionality of the agency’s “claimed authority to wield approval power and control over salvage operations.”

Smith also wrote that the firm’s plan for the expedition meets most requirements set forth in the international agreement and other restrictions. Those include justifying the expedition on scientific and cultural grounds and considering potential damage to the wreck site.

The firm submitted a 60-page plan to retrieve the telegraph, which is believed to still sit in a deck house near the doomed ocean liner’s grand staircase.

The company said an unmanned submersible would slip through a skylight or cut the heavily corroded roof to retrieve the radio. A “suction dredge” would remove loose silt, while manipulator arms could cut electrical cords.

But Ole Varmer, a retired NOAA attorney and a senior fellow at The Ocean Foundation, said a salvage mission into the Titanic’s hull remains ripe with legal issues.

Chief among them is a long-held belief that the two pieces of the ship’s hull on the ocean floor constitute a memorial site that should stay undisturbed, he said.

Varmer said that belief guided the initial business plan of the salvage firm’s original owner, George Tulloch, and his interpretation of the 1986 Titanic Memorial Act. He said it then informed the court’s order in 2000 and was incorporated into the international agreement and subsequent legislation.

“The public interest in not disturbing the hull portions as part of a memorial was established more than three decades ago,” Varmer said.