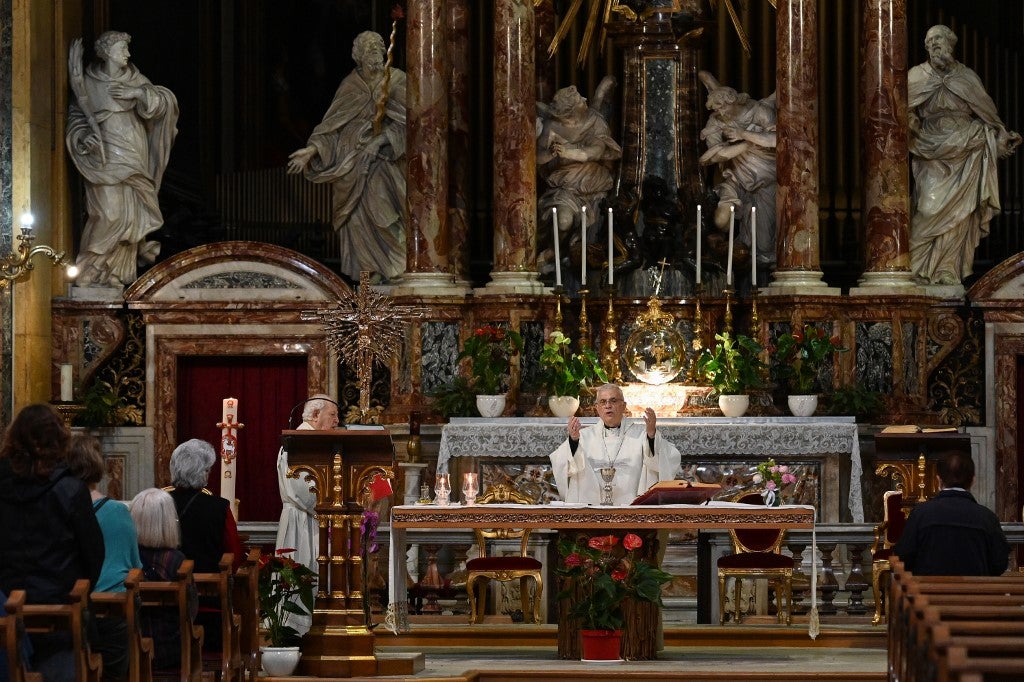 Italian bishop Francesco Micciche celebrates mass at the church of Santa Maria in Traspontina in Rome on May 18, 2020 during the country’s lockdown aimed at curbing the spread of the COVID-19 infection, caused by the novel coronavirus. – Restaurants and churches reopen in Italy on May 18, 2020 as part of a fresh wave of lockdown easing in Europe and the country’s latest step in a cautious, gradual return to normality, allowing businesses and churches to reopen after a two-month lockdown. (Photo by Vincenzo PINTO / AFP)

After two and a half months of waiting, 83-year old Alba Fiore eagerly pulled down her mask to receive communion at a church in Rome Monday.

“Finally!” she said with a gratified sigh.

This was the first religious ceremony at the Church of Santa Maria in Traspontina, a stone’s throw from the Vatican, since Italy went into lockdown.

“After two months without being able to attend a mass other than the one on television, it’s a great day for me.”

Religious ceremonies were authorized in the 25,000 parishes across the country from Monday — provided the fonts for holy water were empty and visitors followed strict social distancing rules.

The faithful have been warned repeatedly that a failure to adhere to sanitary protocols could spark a second wave of the pandemic that has claimed around 32,000 lives, 120 priests among them.

Fiore, who rarely left her home during the shutdown, described being able to attend the 16th-century Carmelite church as like seeing the “dawn” after a period of darkness.

“It was not easy being locked up in my house,” the former teacher, who has attended church since she was a little girl, told AFP. She spent the time-devouring novels, she said.

“After all that silence (in lockdown), which became almost a spiritual silence, one feels the need to take a (spiritual) breath”, she added.

As she arrived for morning mass, Fiore washed her hands with the disinfectant gel at the entrance, adjusted her mask and took her place on one of the pews, at a good distance from a dozen or so other believers.

“It’s all been organized with care, I feel serene,” she said.

As passing around a collection bowl is now forbidden, ballot boxes have been installed to collect donations.

The church had been open to people wanting a quiet place to pray during the lockdown, but hardly anyone came.

“We hadn’t seen anything like it, even in times of war!” he said.

“I mostly talked to the faithful on the phone,” he said, though the video-streamed masses were “very well attended”, drawing Carmelite brothers as far away as Brazil and India, as well as Italy.

The week’s masses would be a sort of general rehearsal for Sunday mass, said Brogi, when he was particularly looking forward to seeing families and children.