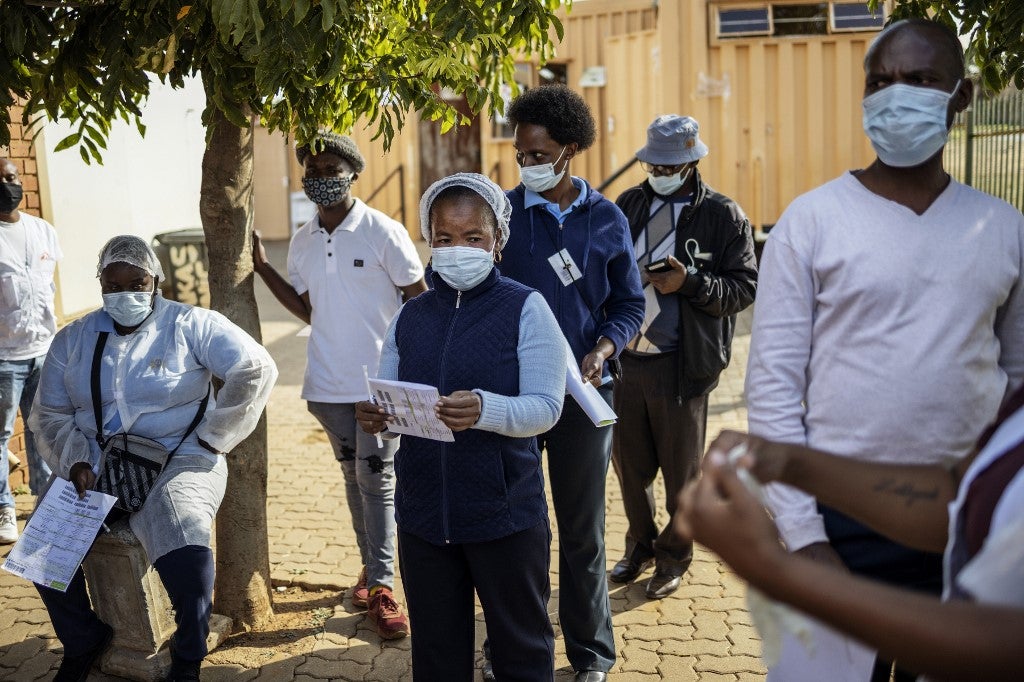 Health personnel waits in line to be tested for COVID-19 coronavirus at the Vlakfontein Clinic in Lenasia, Johannesburg, on May 13, 2020. – Bhelekazi Mdlalose, who is employed by Doctors Without Borders (MSF), left her family and usual job in the mountain town of Rustenberg in March 2020 to support community work in Johannesburg. (Photo by Michele Spatari / AFP)

With an expert flick of the wrist, South African nurse Bhelekazi Mdlalose collected throat swabs from young men lining up for coronavirus testing at a run-down hostel in downtown Johannesburg.

Health workers were sent to the overcrowded block of single-room flats — mainly occupied by men from rural areas doing odd jobs in the city — as part of a mass community screening and testing (CST) campaign launched by the government last month.

Mdlalose, who is employed by Doctors Without Borders (MSF), left her family and usual job in the northwestern town of Rustenberg in March to support community work in Johannesburg.

“We identify those that are COVID-19 positive and those that have symptoms,” said Mdlalose.

“These are vulnerable people,” she added, pointing out that most would not even think to visit a clinic when sick. “By being here we actually target the right group.”

But as South Africa’s coronavirus outbreak picks up pace — with confirmed cases creeping over 13,500, including 247 deaths — Mdlalose and other health experts are beginning to see the limits of the country’s lauded community screening strategy.

“I think we are approaching capacity in what we can do, both to detect cases but also to follow them up.”

“We decided that we shouldn’t just wait in hospitals for patients to arrive,” said the government’s top coronavirus advisor Salim Abdool Karim. “We had to have a more proactive approach and go out there.”

Around 28,000 health workers have been mobilized over the past month, aiming to test 10,000 people per day.

They have screened over nine million people so far, around 15 percent of the population, and tested more than 420,000.

“This is the largest and most extensive public health mobilization in the history of our country,” President Cyril Ramaphosa said during an address this week.

But labs have been struggling to keep up and medical staff say it can now take up to two weeks for test results to arrive, up from an initial two to three days.

“With longer and longer turnaround times… someone somewhere has got to make a decision about where the (testing) priority lies,” he added.

“We expected this,” he told AFP. “This is by far the largest pandemic known to humankind.”

Mdlalose sighed in frustration earlier this week as she pulled on protective gear and counted up swab kits to test the 20-odd workers of a community clinic outside Johannesburg.

She was sent after the clinic manager failed to submit swab samples from staff, who as medical workers should all be tested.

The small facility was already struggling to swab an average of four suspected cases per day coming from the surrounding township.

“I don’t think mass swabbing is a good idea,” Mdlalose muttered as she fastened a blue protective apron around her waist. “The test kits and the resources to do this are not there.”

South Africa “is dependent on foreign companies for testing materials and kits,” cautioned researchers Marc Mendelson and Shabir Madhi in a paper this week.

“We… need to prioritize testing in suspected severe COVID-19 that requires admission to hospital.”

Mendelson and Madhi said it had become an “unrealistic goal” to pursue CST when hundreds of new cases are reported each day, adding thousands to the lists of people to track and screen.

‘We haven’t dodged the bullet’

Mdlalose, however, believes the real value of community outreach lies in preparing citizens and health workers for the months ahead, when South Africa’s outbreak is expected to hit its peak.

“We haven’t dodged the bullet, we are still going to have masses of positive cases,” Mdlalose told nurses at a training session.

Every morning this week, she has briefed a different group on lesser-known COVID-19 symptoms, taught participants to avoid the tonsils when swabbing and how to wear face masks properly.

Many were hearing information for the first time.

“It’s new to us and we need to know more about it,” said community nurse Masesi Mashinini.

Back at the hostel, Nhlakanipho Majola was grateful for the opportunity to test.

“I want to be sure about whether I have it or not,” said the 26-year-old taxi driver, grimacing after the swab. “Many guys are not taking this seriously (and) I am so scared about it.”

Mdlalose took care to answer the men’s questions as they filed through the testing tent. She knew it could take time for their results to arrive.

“If they are positive we will need to isolate them,” she said expressing doubts there’s got enough facilities for that.