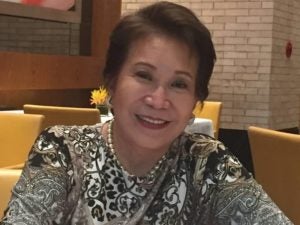 The Senate is in mourning for yet another of its former members, Tessie Aquino-Oreta, who died of cancer on Thursday night. She was 75.

Only three weeks ago, on April 20, ex-senator Heherson Alvarez, an environmentalist and stalwart of the anti-Marcos resistance, died of the new coronavirus disease (COVID-19) on April 20.

“She was a very lively person and a very good legislator … My family and I are so saddened by her demise,” Senate President Vicente Sotto III said of Oreta on Friday.

“[She was] truly a staunch supporter of education for the masses and women empowerment … She was like a sister to me and Greg. We will miss her terribly,” Sotto told the Inquirer, referring to his close friend, former senator and now Communications and Technology Secretary Gregorio Honasan II.

“Her work ethics were excellent,” he added, recalling their time in 2004 as leaders of the campaign team of the then movie superstar and presidential candidate Fernando Poe Jr., since deceased.

Senate Majority Leader Juan Miguel Zubiri said that in accordance with its tradition, the chamber would immediately suspend its session on Monday in honor of Oreta, who also served as congresswoman representing the Malabon-Navotas district from 1987 to 1998.

Zubiri said the scheduled meeting on Monday of the Senate committee of the whole with the members of the Cabinet would be moved to Tuesday.

In a statement expressing its condolences to the Aquino and Oreta families, Malacañang said the late lawmaker had “a distinguished career in public service.’’

“She served the country as a senator during the 11th and 12th Congress and as (Malabon) representative during the eighth, ninth and 10th Congress,’’ presidential spokesperson Harry Roque said.

Sen. Francis Pangilinan said Oreta’s passion for public service might have been influenced by her older brother, the late democracy icon and freedom fighter Benigno “Ninoy” Aquino Jr. Himself a former senator, Aquino was assassinated at the then Manila International Airport on Aug. 21, 1983, upon coming home from exile in the United States.

“It’s just appropriate that [Oreta] was fondly known [by her initials] TAO. She had a concern [for the common man], humility and heart, particularly in her advocacy for education,” Pangilinan said.

He said his wife, actress Helen Gamboa, a relative of Oreta’s, was particularly grieved by the former senator’s death. “Helen is devastated by her passing. She has not stopped crying since we were told of the news [Thursday] night,” he said.

Sen. Richard Gordon said “the country lost a dedicated public servant who was also an advocate of education of employment.’’

“Not only did we share the same passion for promoting the welfare of our country’s teachers because of our belief that having good teachers is the key to a better future for our country, but Tessie was a very close friend to us,’’ Gordon said.

Former Sen. Bam Aquino expressed grief over the death of his aunt: “Our hearts are heavy for losing someone who cared for us and her countrymen deeply. May you rest in peace, Tita Tessie.” —MARLON RAMOS