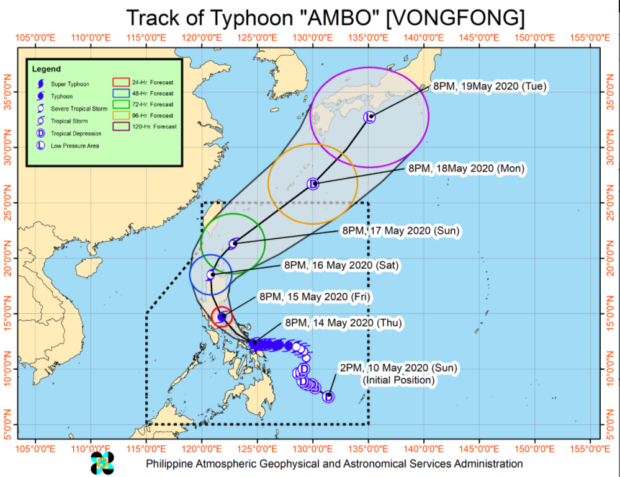 According to the Philippine Atmospheric, Geophysical and Astronomical Services Administration (Pagasa), Ambo (International name: Vongfong) was last spotted 230 kilometers east of Catarman in Northern Samar.  It is now packing maximum sustained winds of 150 kilometers per hour (kph), down 5 kph from its previous strength.

Its gustiness reaches about 185 kilometers per hour.

Pagasa said that storm surges, especially on the northern shorelines of Camarines Sur and Quezon province, may see wave heights of over three meters.  Parts of Bicol region would also experience storm surges along with Quezon and Aurora although it would be more likely lower than three meters.

Ambo is expected to make landfall again over the southern portion of Albay or the northern part of Sorsogon in the coming hours.

Metro Manila and other areas like Rizal, Batangas, Laguna, Cavite, the rest of Quezon, Bulacan, eastern part of Pampanga southern part of Nueva Ecija and Aurora, northern part of Eastern Samar, central and northeastern part of Samar, rest of Northern Samar, Biliran, and Romblon are now under Signal No. 2.

Meanwhile, Signal No. 1 is raised over the northern portion of Leyte, the rest of Samar and eastern Samar, northeastern Capiz, northeastern Iloilo, northern Cebu, Oriental Mindoro, and the rest of Pampanga, Nueva Ecija, Aurora, Bataan, Tarlac, Zambales, Pangasinan, and other areas in Central and Northern Luzon.

Ambo is expected to be 15 kilometers east of Infanta, Quezon, by Friday night, and at the tip of northern Luzon by Saturday night.  It may exit the Philippine area of responsibility by Monday.

Residents in the areas mentioned are advised to monitor latest Pagasa updates and coordinate with city officials for disaster risk reduction plans.