GENEVA — The World Health Organization’s director-general has faced many challenges during the coronavirus pandemic: racial slurs, death threats, social media caricatures — he was once depicted as a ventriloquist’s dummy in the hands of Chinese President Xi Jinping — and U.S. funding cuts. 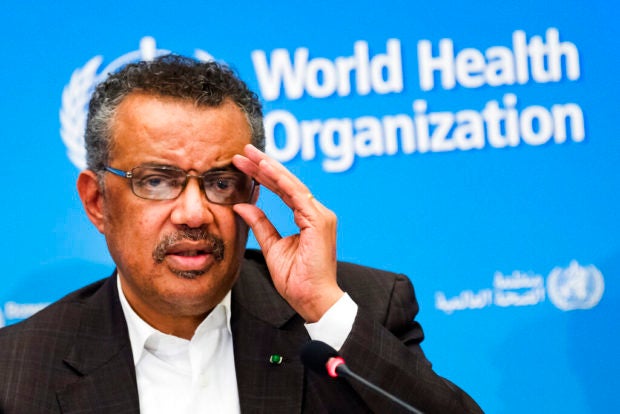 In this Jan. 30, 2020 Tedros Adhanom Ghebreyesus, Director General of the World Health Organization (WHO), talks to the media at the WHO headquarters in Geneva, Switzerland.  Jean-Christophe Bott/Keystone via AP

Through it all, Tedros Adhanom Ghebreyesus has endeavored to rise above the troubles with a focus on one main task: Building international “solidarity” against an outbreak whose confirmed death toll is nearly 300,000 and that quelled economic activity in countries rich and poor. Many health policy experts have praised his handling of the outbreak overall, despite criticism of the U.N. health agency by the Trump administration.

Next week, Tedros’ track record and background will come under intensified scrutiny as WHO holds its biggest annual event — the World Health Assembly — in a “virtual” and abbreviated version that focuses on COVID-19.

Critics and some analysts cite his background as a government minister in Ethiopia, with its history of authoritarian regimes. Not long after taking office in 2017, Tedros appointed Zimbabwe’s then president, Robert Mugabe, who often traveled abroad to receive health care, as a WHO “goodwill ambassador,” only to revoke the appointment after a wave of outrage erupted.

Most recently, Trump has faulted WHO for being too accepting and praising of China’s handling of the early outbreak, wedging Tedros personally in the tense political standoff between the U.S. and China. He has shied away from criticizing the two powerful U.N. members, and has praised both President Donald Trump and Xi — even while leaving hints seemingly directed at Beijing and Washington.

“Don’t use this virus as an opportunity to fight against each other or score political points. It’s dangerous,” he said recently, appealing to the world. “It’s the political problem that may fuel further this pandemic.”

Tedros, 55, knows about the punishing sides to both politics and pandemics: A malaria expert with a doctorate in microbiology from the University of Nottingham in Britain, he served as health minister and foreign minister in Ethiopia before his election in 2017 in one of WHO’s most competitive races.

He’s the first WHO chief from Africa, and the first who doesn’t have a medical degree — seen as a hole in his resume by some critics.

Tedros was born in the city of Asmara, before it and the rest of Eritrea split from Ethiopia. Like many Ethiopians, he goes by his first name. A father of five, he has tweeted about riding bikes with his daughter. A few years ago, he tried out the saxophone, but give it up because of a heavy workload.

Years ago, Tedros was spotted as a rising star of health policy by Melinda Gates, whose charitable foundation has become WHO’s No. 2 donor. He has been credited for helping expand Ethiopia’s health care workforce as health minister from 2005 to 2012.

Tedros often uses wit, feigned ignorance and charm to disarm or sidestep critics. He has drawn on the star power of Lady Gaga and garnered support from European leaders, and called Spanish Prime Minister Pedro Sanchez “mi hermano”: my brother. He bills himself “Dr. Tedros,” leaning on his doctorate, and actively tweets to a million followers.

No stranger to the personal anecdote, Tedros once said it was “pure luck” for him to aspire to the top WHO job, noting that when he was 7, his younger brother died from a childhood disease — and it could just as easily have been him.

Dr. Lia Tadesse, Ethiopia’s current health minister, who worked with Tedros when he had her job, said he was known for showing calm, patience and a good ear.

“While he was a minister, he was known to really care for people who are considered at the lowest level of the strata, like the cleaner, the security guard and so on,” she said by phone. “He takes time to listen to their problems, and really recognize their efforts.”

Tedros has played down death threats against him, but has stood up to defend Africa. He has blasted the government of Taiwan, which isn’t a U.N. member state, for allegedly condoning “racial slurs” against him. Taiwan’s current government has faced intense political pressure from rival China, and has been appealing for admission as an observer to the World Health Assembly on Monday and Tuesday.

Political sniping between the U.S. and China, and Tedros’ own political baggage, can make it tough to cut through the noise during a global health emergency.

“If you criticize the WHO and Tedros, you’re somehow seen as a supporter of the Trump administration and their clearly self-serving attacks to shift blame from their own failure,” said Jeffrey Smith, director of Washington-based Vanguard Africa, a promoter of democracy. “On the other hand, if you defend Dr. Tedros and the WHO, you’re seen as somehow endorsing his comfort level with the world’s despots and dictators.”

“Yes, Dr. Tedros is the product of a deeply authoritarian regime. And he has long displayed an affinity for dictators,” Smith said. “The WHO does critical work and deserves support. And yes, the WHO also needs reform. All of these things can be true.”

David Shinn, a U.S. ambassador to Ethiopia in the 1990s, said Tedros had a good relationship with both Beijing and Washington while Ethiopia’s foreign minister. Shinn cited a “cautionary note:” Tedros had the job when Ethiopia relied heavily on China for economic and political support, as it does today.

“As a result, he probably was willing to accept at face value what he was being told by China with perhaps not questioning as strongly as he might have what the situation really was,” said Shinn, an adjunct professor at George Washington University’s Elliott School of International Affairs.

Tedros appears to have learned one key thing from his predecessor, Dr. Margaret Chan of China: Be reactive to outbreaks. Amid the Ebola outbreak in eastern Congo that’s now seemingly on its last legs, Tedros traveled over a dozen times to the region. With COVID-19, he has been omnipresent.

“Dr. Tedros has been very much at the helm in terms of being in almost every single press conference, communicating directly with the public, tweeting — really speaking directly to people,” said Suerie Moon, co-director of the Global Health Center at Geneva’s Graduate Institute.

“He’s able to really humanize a situation that’s quite frightening for most people and be a reassuring presence,” she said.