Solon chides Sinas: You could’ve stopped birthday party, but you chose not to 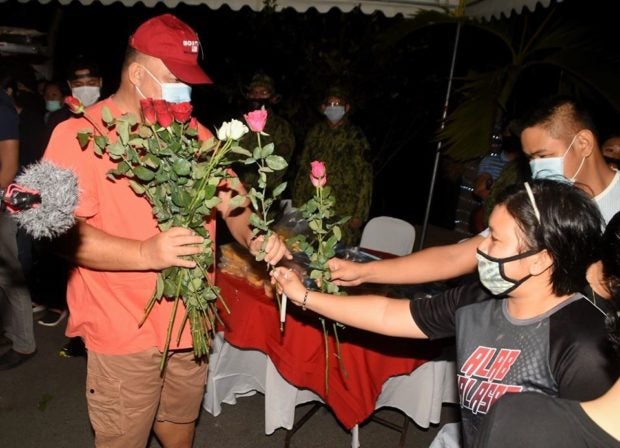 A mañanita was held for Metro Manila police chief Major Gen. Debold Sinas on May 8. (Phot from the NCRPO Facebook page)

MANILA, Philippines — National Capital Region Police Office (NCRPO) chief Maj. Gen. Debold Sinas could have ended the “surprise” birthday party thrown by his subordinates to respect quarantine regulations, but he chose not to.

This was the reaction of Bayan Muna party-list Rep. Ferdinand Gaite, who said that, judging from the photos that leaked out from the Facebook page of the NCRPO Public Information Office (PIO), Sinas enjoyed the attention he got.

“Sinas who is a senior official and the center of the celebration could have told everyone to end the party right then and there simply out of delicadeza. But he evidently enjoyed the attention and cheered it on,” Gaite said in a statement on Wednesday.

“There were also photos circulating showing that they were drinking alcohol while everyone is aware of the liquor ban. Sinas can try hard to dismiss the other photos, but those that were posted in Facebook by the PNP PIO already reveal a lot,” he added.

The issue came up when the NCRPO PIO uploaded photos on its Facebook page of a “mañanita” for Sinas — or a morning birthday celebration for commanding officers. The NCRPO chief’s birthday was last May 8.

Sinas and his personnel earned the ire of netizens as they saw what appeared to be a disregard for the rules on physical distancing and mass gatherings, which were placed to minimize the risk of coronavirus transmissions.

After he was condemned on social media, Sinas reasoned out on Wednesday that he was caught in a tight spot of accommodating officers who had already prepared the celebration for him — although he insisted that he reminded them to follow COVID-19 prevention measures.

“Overjoyed as a birthday celebrant, I was caught up with a traditional Mañanita spontaneously conducted by some of my officers and men in their own volition. In all actuality, my accommodation to them was done with all cautiousness because I am fully aware of the Anti Covid measures being implemented by the government,” Sinas said.

He also argued that some of the photos — including some showing him and other police officers with beer cans over and under the table, in violation of the liquor ban — were old.  As for wearing the same shirt, Sinas’s staff said he was wearing the same shirt on the mañanita and last December.

“We hope the investigation into the now infamous ‘mañanita’ would not be about clearing Gen. Debold Sinas like the investigation that cleared him of responsibility for the murder of 14 farmers when he was head of Philippine National Police (PNP) Central Visayas,” Gaite said, referring to the killing of 14 farmers during an anti-loose firearm operation last March 2019.

“We have seen this before, so we will be vigilant. The photos clearly show that there were violations of quarantine protocols regarding prohibition of mass gatherings, mandatory use of face masks, social distancing, among others, as it would be very hard for them to say otherwise,” he added.

According to the COVID-19 tracker website of the Department of Health (DOH), there are to date 11,618 cases of the disease nationwide, of which 7,464 are in Metro Manila, which falls under the jurisdiction of the NCRPO.

All over the world, there are now over 4.264 million persons infected with the latest coronavirus strain, 291,972 of whom have died while 1.493 million have recovered.