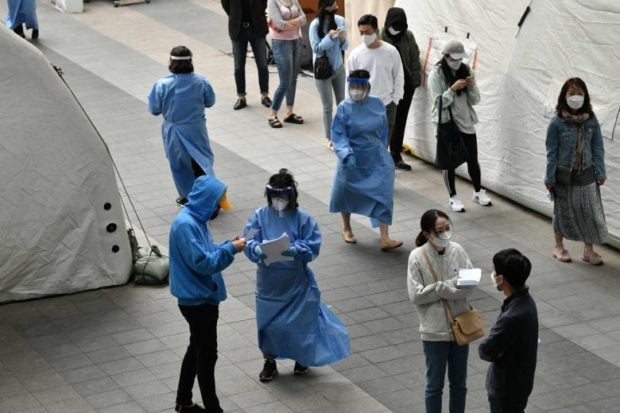 Medical staff members (in blue gowns) guide visitors waiting to take the coronavirus test in Itaewon, Seoul, on May 12, 2020. AFP via The Straits Times/Asia News Network

SEOUL — It is still too soon to declare victory against the coronavirus pandemic. Fresh clusters have resurfaced in Seoul in South Korea and Wuhan in China after controls were eased, prompting their governments to revive shutdowns and ramp up efforts to test and trace. Countries need to progress slowly and steadily, says the WHO, and be vigilant against a second wave of infections.

South Korea is tapping mobile phone data and credit card records in an all-out effort to reach people potentially exposed to the coronavirus in a new cluster outbreak linked to clubs in Seoul’s nightlife district Itaewon, as the number of infections rose to 102.

Sixty-four of them are people who visited clubs while the rest are their family members, friends and colleagues.

It remains a mystery how the first Itaewon patient – a 29-year-old resident of nearby Yongin city who went clubbing on May 1 and 2 and is now labelled a superspreader – caught the virus despite not traveling overseas and having no contact with previous cases.

As a result, the authorities have decided to widen the scope of contact tracing. Officials are asking people who visited Itaewon from April 24 to May 6 to go for testing. Previously, they focused on the long weekend from April 30 to May 5.

Mr Kwon Jun-wook, deputy director of the Korea Centers for Disease Control and Prevention (KCDC), pointed out that the infections are traced to not one but several clubs, and that some cases have no apparent links to the first patient.

The superspreader had visited King Club, Trunk, Queen, Soho and HIM, all known to be gay bars.

Club Made, which is very popular with young men and women and consistently draws long queues, is now feared to be another hot spot, after a 20-year-old man tested positive on Sunday. He had visited the club on May 2 but had not gone to any of the places which the superspreader went to.

Nine out of the 51 clubs in Itaewon are known to have confirmed cases, according to officials.

Mr Kwon said their assessment is that “silent transmissions” had been going on in the community but exploded after hitting the clubs.

Many clubs in Itaewon are underground, with little or no ventilation, and clubbers tend to dance, drink and lean closely together to talk, all without wearing face masks.

Seoul Mayor Park Won-soon has warned of a high risk of infection as there is uncertainty over the source of transmissions and that 36 per cent of the confirmed cases did not show any symptoms.

He also urged people who visited Itaewon from April 24 to May 6 to cooperate with the authorities and go for testing.

Contact tracing has become a challenge as the gay community in South Korea does not want to be identified owing to concerns about privacy and discrimination.

About 2,000 of the 5,517 visitors to the first five clubs identified in the outbreak remain uncontactable. Officials said it is possible that many of them gave fake numbers when asked to fill in an entry log book before entering the clubs – a precautionary measure required by the authorities.

Mr Park said the city has received a list of 10,905 people who used their mobile phones near the five clubs from April 24 to May 6, and has sent text messages to them asking them to go for testing and to stay home for 14 days. The numbers were provided by mobile phone operators and the police.

The same message was also sent to 494 people who used their credit cards in the area. This list was provided by credit card companies.

The KCDC said it has so far conducted 13,000 tests related to the Itaewon cluster.

Most of the people came forward voluntarily, and the numbers rose after officials promised anonymity on Monday. A total of 6,544 tests were done on Monday, up from 3,500 a day earlier.

The new cluster emerged as South Korea starting easing stringent social distancing rules from May 6 to allow people to resume daily life amid a slower daily rate of infections.

The country is now faced with the risk of a second wave of infections, after many people became complacent during the six-day long weekend from April 30 to May 5, and went traveling or partying.