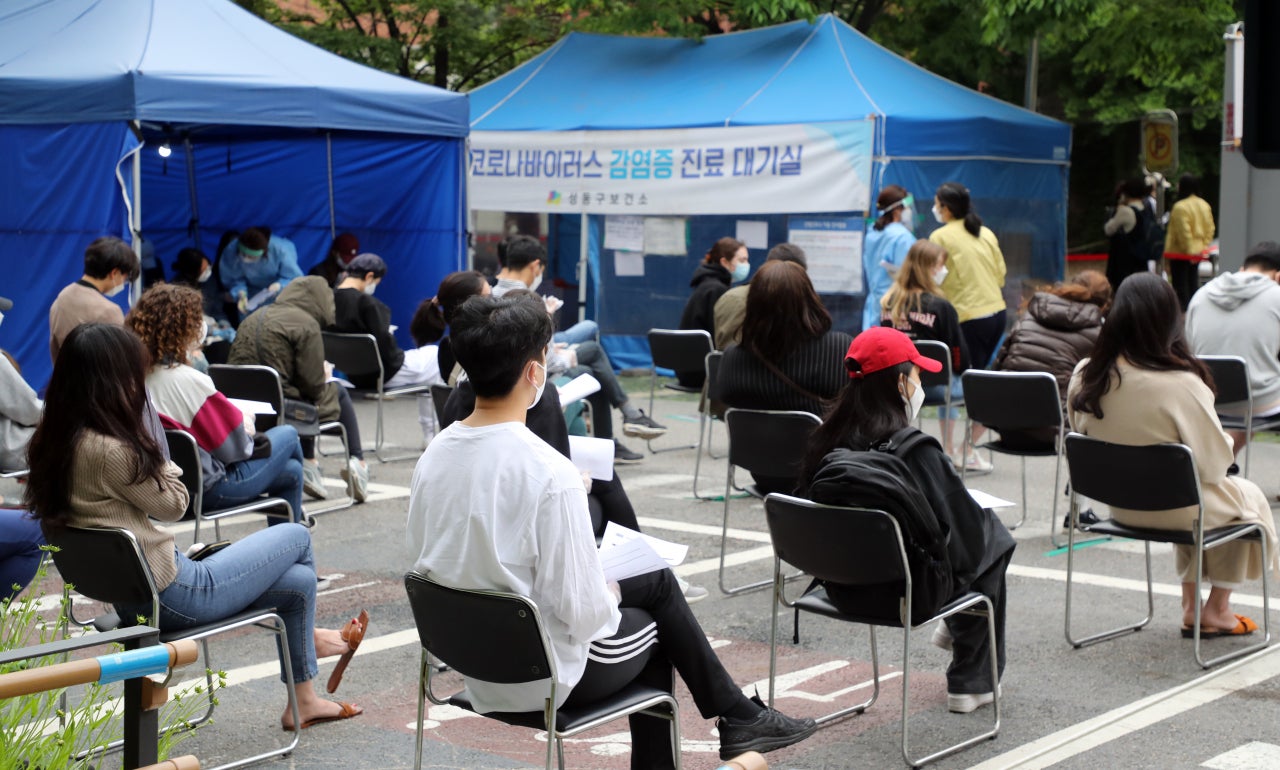 SEOUL — South Korea appeared to have brought its novel coronavirus epidemic under control. Zeynep Demirezer went out with friends on May 1 for a night of clubbing in Itaewon, a party district in Seoul that is popular among Koreans and foreigners alike.

That night, the 21-year-old student from Turkey went to two clubs — Soho and Thursday Party — in the multicultural district with five of her friends. She filled in her contact information, used hand sanitizer and wore a mask before going in.

Until she received a call from a municipal office about a week later and was asked to be tested, Demirezer had no idea that she might have been exposed to the virus, as all the text alerts she had received were in Korean.

“If I were alone, I would have had no idea. I actually heard that it could be a second wave of infections through Turkish media,” said Demirezer, who is now in self-quarantine after her test results came back negative Monday.

“Because even the information I get, like emergency text messages, are only in Korean. Without translating them on Google, I would have not known. Even my test result came back in Korean,” she said.

In what may be a sign that there are hiccups in the process of tracing those who visited the Itaewon clubs, one of the friends Demirezer went out with was not contacted by the district office. The friend sought testing on her own initiative after learning about the situation, Demirezer said.

“I feel extremely safe here, but I feel a little bit excluded because I don’t know Korean. That is my responsibility, but in situations like these, some information translated in English would be helpful,” she said.

Tracking down foreigners who may have been exposed to the coronavirus remains a challenge for health authorities as their access to virus-related information — ranging from who qualifies for testing to updates on the outbreak — is limited due to language barriers.

A total of 102 coronavirus cases have been linked to the nightclub cluster in Itaewon so far since a 29-year-old Korean man from Yongin, Gyeonggi Province, tested positive after visiting five bars and clubs in Itaewon on May 2-3. Four are foreign nationals, according to authorities.

Authorities had identified some 100 foreign nationals who visited the nightlife spot during that period as of Monday.

“I kept receiving the emergency alerts in Korean without the possibility of copying and pasting for translation, so that was a burden until I discovered an online expat community,” said Elly, a 30-year-old French student in Seoul.

“I am not really worried that the virus will spread to the expat community in particular, as a lot of locals go clubbing there, even though a lot of foreigners live in Itaewon,” she said. “I hope the expat community now has sufficient resources and knowledge to behave accordingly and respect the quarantine and safety measures.”

Threatening the government’s efforts to contain a second wave of infections, some 2,000 out of 5,500 visitors to the Itaewon clubs remained out of reach as of Tuesday. It is suspected that some may have provided fake contact information on the visitors’ logs at the clubs or are evading contact from authorities.

An estimated 10,905 people were in the vicinity of the five clubs and bars in question for more than 30 minutes from midnight to 5 a.m. between April 24 and May 6, based on phone signal tower records, the Seoul Metropolitan Government said Tuesday. The same day, it sent a text message in English to all the numbers identified and asked the recipients to be tested –the first such text message sent out in English.

“The emergency text messages are sent out to Koreans, so we are not considering it for now (sending out the alerts in English),” said an official from the government’s central headquarters for the response to the COVID-19 outbreak.

Some expats, those who teach English at public schools or private cram schools, spoke of being “singled out” for testing because they are foreigners. Itaewon has historically been associated with the expat community here.

“It makes sense, as foreigners typically hang out in Itaewon, but why are younger Koreans and younger teachers not asked to be tested if it were about safety of children?” asked a 34-year-old English teacher at a public school in Seoul.

The only native English teacher there, she was personally asked by her vice principal to seek testing — even before saying she had been to Itaewon in late April to get some drinks and food. Her Korean co-teachers were not asked.

“The vice principal did not know I had been to Itaewon but sent me to get tested anyway. I felt discriminated against,” said the US citizen, whose results came back negative Tuesday.

Foreign English teachers cried foul on online communities about what they viewed as discrimination against foreigners — from being forced to be tested for the virus even though they had not been to Itaewon to being the subject of rumors online about having the virus.

On online communities run by mothers’ groups, netizens posted unverified information about how many foreign teachers went clubbing during the period, with comments bashing the native English teachers.

“The parents called my boss a lot and are concerned over the outbreak so my boss had everyone, including Korean teachers, sign a paper basically saying we didn’t go to Itaewon during those dates and to reassure parents we are being careful,” said a 26-year-old English teacher at private cram school in Seoul.

Being a foreigner and a member of a sexual minority means even tighter scrutiny.

“Parents need to know if any of the teachers had been exposed, so even though it was like vaguely uncomfortable and homophobic to single me out, I can sympathize with their intent,” said a 27-year-old US national who teaches English at private cram school in Seoul. “I don’t flaunt my sexuality but it’s definitely not a secret, so I know for a fact that’s why they asked me.”

Her foreign co-teachers were not asked whether they had been to Itaewon.

“I just hope there will be no more repercussions,” she said.

Those who visited bars and clubs in Itaewon between April 24 and May 6 are urged to get tested for the novel coronavirus at nearby clinics, regardless of whether they show symptoms, and to stay home. Those living in Seoul can seek testing anonymously. Unregistered migrants can also be tested without having their status reported to the immigration office.

The government covers all costs for COVID-19 testing and treatment for all foreign nationals.