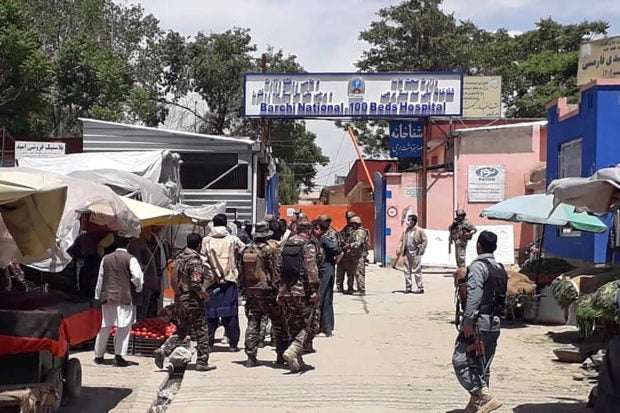 Afghan security personnel arrive at the site of an attack outside a hospital in Kabul on May 12, 2020. Gunmen stormed a hospital on May 12 in an ongoing attack in the Afghan capital Kabul, a government official and a fleeing doctor said. Photo by STR / AFP

KABUL — Gunmen stormed a hospital on Tuesday in an ongoing attack in the Afghan capital Kabul, as a funeral in the country’s restive east was also hit by a suicide bomber.

Special forces rescued more than 80 people at the Kabul hospital, according to an interior ministry spokesman.

The facility is located in western Kabul, which is home to the capital’s minority Shiite Hazara community — a frequent target of Sunni militants from the Islamic State group.

The flare-up in violence comes as Afghanistan grapples with myriad crises including a rise in militant operations across the country and a surge in coronavirus infections.

A pediatrician who fled the hospital told AFP he heard a loud explosion at the entrance of the building.

“The hospital was full of patients and doctors, there was total panic inside,” he said, asking not to be named.

The humanitarian organization Doctors Without Borders (MSF) supports maternity services at the hospital.

Also on Tuesday, dozens of people were believed to have been killed or wounded in a suicide attack on the funeral of a local police commander in the country’s eastern Nangarhar province, according to provincial spokesman Ataullah Khogyani.

The attacker detonated his explosives in the middle of the ceremony, he said.

“Initial information shows about 40 people killed and wounded in the attack,” Khogyani added.

The violence comes just a day after four roadside bombs exploded in a northern district of Kabul, wounding four civilians including a child.

The bombings were later claimed by the Islamic State group, according to the SITE intelligence group.

They were just the latest in a string of Islamic State attacks on the capital.

In March, at least 25 people were killed by a gunman at a Sikh temple in Kabul, which was later claimed by the group.

IS is also responsible for an infamous attack in March 2017 on one of the country’s largest hospitals, when gunmen disguised as doctors stormed the Kabul building and killed dozens.

In recent months, the jihadist group has suffered mounting setbacks after being hunted by US and Afghan forces as well as Taliban offensives targeting their fighters, but it still retains the ability to launch major assaults on urban centers.

The Taliban have largely refrained from launching large attacks on Afghan cities since February when they signed a landmark withdrawal deal with the US meant to pave the way for peace talks with the Kabul government.

Under the agreement, the Taliban promised not to target forces from the US-led coalition, but made no such pledge toward Afghan troops and have stepped up attacks in the provinces.