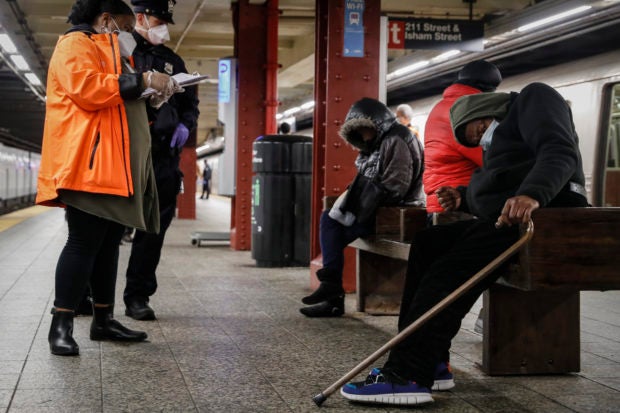 FILE – In this April 30, 2020 file photo, homeless outreach personnel assist passengers found sleeping on subway cars at the 207th Street A-train station in the Manhattan borough of New York. New York City transit officials said they’re providing buses for homeless people to shelter from unseasonably frigid temperatures this weekend during newly instituted overnight subway closures. The subway system has been shutting down from 1 to 5 a.m. since Wednesday, May 6, as part of an outbreak-related plan for daily train disinfecting. (AP Photo/John Minchillo, File)

At least 73 children in New York have been diagnosed with symptoms similar to Kawasaki disease — a rare inflammatory condition in children — and toxic shock syndrome. Most of them are toddlers and elementary-age children.

Cuomo announced two more deaths a day after discussing the death of a 5-year-old boy Thursday at a New York City hospital. A 7-year old in Westchester County and a teenager in Suffolk County on Long Island also died. There is no proof that the virus causes the mysterious syndrome.

Cuomo said children had tested positive for COVID-19 or the antibodies but did not show the common symptoms of the virus when they were hospitalized.

“This is the last thing that we need at this time, with all that is going on, with all the anxiety we have, now for parents to have to worry about whether or not their youngster was infected,” Cuomo said at his daily briefing.

New York is helping develop national criteria for identifying and responding to the syndrome at the request of the Centers for Disease Control, Cuomo said.

Children elsewhere in the U.S. have also been hospitalized with the condition, which was also seen in Europe.

Doctors still believe that most children with COVID-19 develop only mild illness.

At least 3,000 U.S. children are diagnosed with Kawasaki disease each year. It is most common in children younger than 6 and in boys.
Symptoms include prolonged fever, severe abdominal pain and trouble breathing.

Other coronavirus developments in New York.

STAY-AT-HOME
Cuomo did not extend New York’s stay-at-home restrictions to June 7 — despite a claim by a spokesman that he did, according to a top aide to the governor.

Melissa DeRosa, secretary to the governor, released a prepared statement Saturday evening saying the May 15 expiration date for the restrictions still stands “until further notice.”

Cuomo spokesman Richard Azzopardi had said earlier in the day that Cuomo in an executive order extended the stay-at-home restrictions into early June, though regions of the state would be able to phase in reopenings sooner if they meet a series of benchmarks. He later said he misinterpreted the order, which extended the expiration date of other emergency actions.

Cuomo plans to allow regions to gradually begin restarting economic activity after May 15 if they demonstrate progress in taming and tracking the outbreak. DeRosa said new guidance will be issued for regions of the state at that time based on those metrics.

Some upstate areas hope to begin reopening later this month, though none of the state’s 10 regions had met all seven required benchmarks earlier this week.

Regions wishing to phase in economic activity must show that COVID-19-related deaths and hospitalizations are trending down and that there are enough hospital beds to meet a surge. Counties will have to increase testing and tracing and businesses will need to adapt to protect workers.

Businesses will reopen in four phases, starting with construction, manufacturing and retail with curb-side pickup.

THE NUMBERS
New York reported 226 new deaths, up by 10 from the previous day but in line with daily tolls from the rest of the week.

More than 21,200 people in the state have died from coronavirus, though the total doesn’t include more than 5,300 deaths in New York City that were attributed to the virus on death certificates but weren’t confirmed by a lab test.

Pressures on hospitals continue to ease. Total hospitalizations dipped to 7,776, well under half the number at the peak of the outbreak. New COVID-19 admissions are averaging 572 a day, compared to more than 3,000 a day in early April.

The subway system has been shutting down from 1 to 5 a.m. since Wednesday as part of an outbreak-related plan for daily train disinfecting. City outreach workers have been persuading homeless people to leave the system for shelters during the shutdowns.

With temperatures around the freezing mark and a traces of snow reported in Manhattan’s Central Park, transit officials said they also would provide a limited number of buses at end-of-line stations Saturday and Sunday.

The buses are not for transportation, “but may serve as a place for individuals to escape the elements in the short term,” according to a prepared statement from New York City Transit President Sarah Feinberg and Transport Workers Union Local 100 President Tony Utano.

“We are providing these buses only during this cold snap and expect the city to continue to step up and take responsibility for providing safe shelter for those individuals experiencing homelessness,” according to the statement.

The Metropolitan Transportation Authority did not immediately respond to an email Saturday morning asking how many buses were provided and how many people were taking shelter in them.

Read Next
Libyan officials: Shelling at Tripoli’s only working airport
EDITORS' PICK
Metro Manila to remain under COVID Alert Level 2 until December 15
IATF tightens border control, suspends entry of fully vaxxed nationals from ‘green’ countries
Villar Group gears up for AllValue Shopping Party on Dec. 3; around P 1-million promos and discounts up for grabs
Duterte open to making jabs mandatory; Cabinet mulls ‘pressuring’ the unvaccinated
Legarda: Ending Violence Against Women, a cause for all
A delightful blessing!
MOST READ
Quiboloy warns of ‘much worse than Omicron virus’ if his ‘persecution’ is not stopped
Omicron poses ‘very high’ global risk, countries must prepare–WHO
Marcoleta defends pol ads on ABS-CBN
Bongbong Marcos’ conviction in tax case not a crime involving moral turpitude — lawyer
Don't miss out on the latest news and information.