MANILA, Philippines — A driver for a motorcycle ride-hailing app on Friday discovered a small packet of suspected marijuana jammed in between slices of bread that was supposed to be delivered from Pasig City to Malabon City.

The JoyRide rider, who was not identified, said his sharp instinct led him to uncover the illegal drug as he wondered what kind of person would deliver a mere block of bread to someone who is roughly 25 kilometers away from Pasig City and pay a delivery rate that was more than the cost of the loaf.

(Just a [tasty bread] to be brought to Malabon. When I was picking up the item, it was only one loaf. I wondered why the customer had to book this for delivery when this could be bought in Malabon, too, they’ll even pay P314 just for the booking fee.)

(So, I stopped right away near the pickup point and checked the item. I saw there was something hidden in the loaf that was wrapped in plastic. Then I asked why there was no number of the receiver, that’s when I really wondered.) 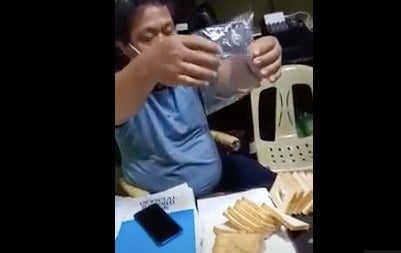 As he grew suspicious about the package, he decided to seek the assistance of authorities at a checkpoint in Barangay Maybunga.

(I went to Barangay Maybunga and had the loaf checked by barangay officials, then there it was, it’s positive that there was marijuana concealed in the bread.)

The rider tried to contact the bread’s sender to no avail.