Similar ventures have also appeared elsewhere in the West, notably launched by the Strass union in France and Canadian organizations Maggie in Toronto and PACE in Vancouver. 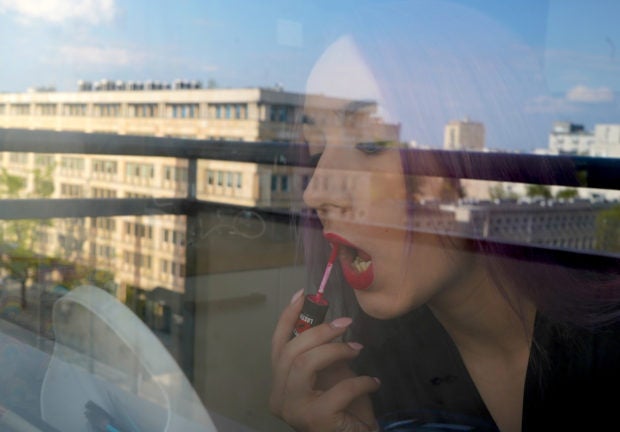 A sex worker named Medroxy does her make-up at her apartment in Warsaw, Poland on April 28, 2020. – The coronavirus pandemic has closed down Poland’s strip clubs and massage parlors, leaving many sex workers struggling to make ends meet but also inspiring solidarity via an online fundraising campaign. (Photo by JANEK SKARZYNSKI / AFP)

The crisis initiative started as donation-only but a group of men and women in the industry – a legal grey zone in Poland – have since signed on to offer photos, videos, or even encounters in return for contributions.

Those interested can transfer cash to the group bank account and collect the product or service of their choice.

“We’ve received 221 donations, with some people contributing multiple times,” said Martyna, who like Medroxy is a member of the Sex Work Polska (SWP) coalition, which defends the rights of industrial workers.

“That’s made it possible for us to help out around 60 people with small sums they can use to get groceries and buy medication.”

Across the Atlantic, the returns were even higher.

“We have currently raised $87,226 (CAD) and approved or distributed $80,750,” said PACE co-executive director Lyra McKee, adding that they had received 652 online applications.

She told AFP the dollar amount doled out to each worker depends “on financial need and level of social marginalization such as being a person of color or trans individual or disabled individual”.

The Prostitution Information Centre (PIC), an Amsterdam-based lobby group, said on Twitter it was “shocking” how many sex workers who were paying tax on legal earnings were being excluded from official help.

Two Dutch Christian parties in the ruling coalition and the opposition Labor party recently called on the government to do more to help sex workers in financial straits.

The pandemic has also forced the industry to go digital.

“A good number of sex workers whose workplaces have closed have switched to doing live video performances,” according to Medroxy.

Already experienced in the field having started in front of a camera four years ago, Medroxy said numerous other sex workers have been reaching out for advice.

She told AFP she would help to organize “an online workshop for people who want to start online sex work”. 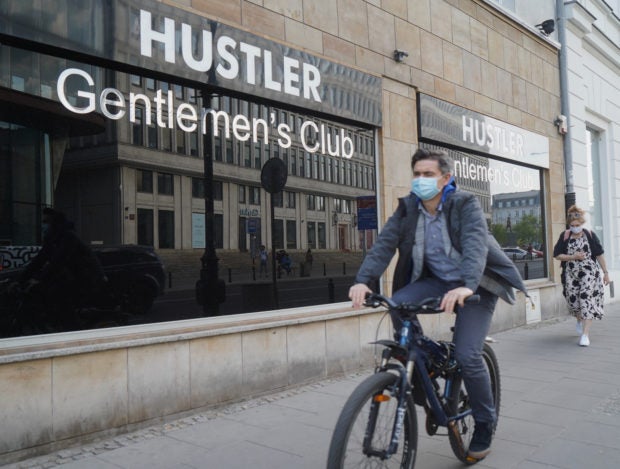 Medroxy said she had continued to see clients in person, having only been out of work for a brief two weeks when the virus first struck Poland.

“My going rate is 300 zloty per hour and I see a maximum of five clients a day,” she said.

That allows her to offer occasional financial help to her father and brother, whose salaries leave much to be desired.

She added that some of her clients have responded to the pandemic in surprising ways, including by keeping face masks on during sex.

Martyna said she is upset over the lack of interest from humanitarian aid groups and public agencies, noting sex workers are “marginalized, stigmatized and excluded and as a result, have been hit hard by the pandemic.”

She said society refuses to recognize that “sex work is work”, leaving sex workers in an unregulated arena with no legal status, forced to exist outside the benefits and tax systems.

Another cause for lament is the haters, she said, who have responded with negative comments to her group’s call for financial assistance.

“They come from all walks of life and from across the political spectrum, the left and the right alike,” she told AFP.

There are no official statistics regarding the number of sex workers in Poland.

But sociologist Mariusz Jedrzejko, who studies the field, estimates there are more than 60,000 sex workers, a third of whom work full-time, in the country of 38 million people.

Read Next
DOH records highest number of COVID-19 recoveries since outbreak; total at 1,618
EDITORS' PICK
Duterte: Authorities may take over hotels, but it’s not a ‘remedy’ in a democracy
When will PH get enough COVID-19 vaccines? ‘I really don’t know,’ Duterte says
Smart introduces Smart Barkada with the launch of Double GIGA
LT Group, Inc. Notice of Annual Shareholders’ Meeting 2/2
Duterte defends govt’s efforts vs COVID in 2020
Smart is fastest 5G Network in PH – Ookla
MOST READ
‘Duterte a total failure as leader. He must step down’ – group
Duterte ‘privately’ dealing with China invasion in West PH Sea – Palace
Ramon Tulfo says gov’t running PH like a ‘headless chicken’
Stop acting like a colonizer, PH business groups tell China
Don't miss out on the latest news and information.