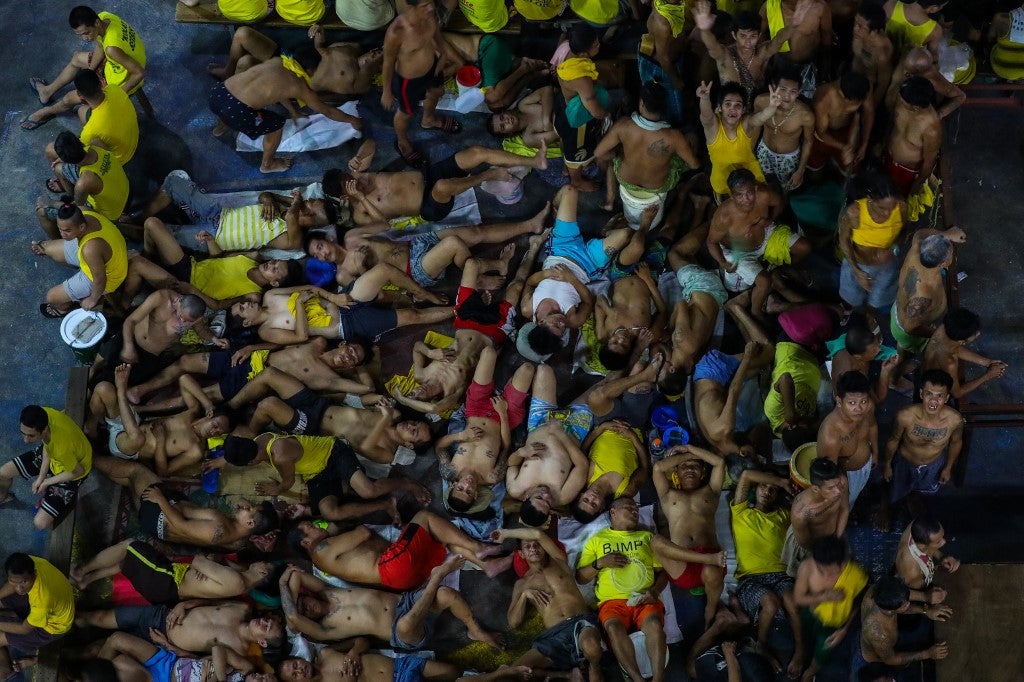 This photo taken on March 27, 2020 shows prison inmates sleeping and gesturing in cramped conditions in the crowded courtyard of the Quezon City jail in Manila. Guards and inmates at a notoriously overcrowded Philippine jail tested positive for the COVID-19 coronavirus, officials said on April 17, sparking urgent calls for the release of some prisoners. (Photo by Maria TAN / AFP)

MANILA, Philippines—The International Coalition for Human Rights in the Philippines continued to call on the government to release political prisoners as coronavirus disease (COVID-19) has infected hundreds across crowded prisons in the country.

Nearly 10,000 prisoners in the Philippines have already been released, according to the Supreme Court, in an effort to curb the spread of the virus within prisons.

“With the COVID-19 outbreak in prisons, the 609 political prisoners are already facing their death sentence,” said ICHRP chairperson Peter Murphy in the statement. “The Duterte government should act now and release them on humanitarian grounds.”

Both inmates and prison personnel have been infected with the virus, with more than 300 persons deprived of liberty contracting the virus.

Despite the Supreme Court’s order to free 9,731 detainees who are unable to afford bail, no political prisoners were released.

The ICHRP argued that most of the political prisoners’ cases are non-bailable and their cases have stalled in courts for years including that of 60-year-old Dario Tomada.

Tomada, who has been in prison for 10 years, is suffering from diabetes and has two respiratory ailments.

“The same compassion shown to the 9,731 released prisoners should be given to political prisoners. We are once again appealing to the leaders of the Philippine judiciary system to act now, to make the just, humane decision of freeing the elderly, sick, vulnerable and all political prisoners,” said Murphy.

Families of the political prisoners as well as human rights lawyers of 23 detainees have filed their petitions to the Supreme Court on April 8 asserting that they are not flight risks because of their old age and frail bodies.

ICHRP and other rights groups already raised concerns about underreporting of COVID-19 cases in the detention facilities while the deaths are not fully reported.

At least four prisoners have died of the virus in Cebu City Jail and there are also fears of further outbreaks in other facilities as mass testing for detainees remains on the back burner.