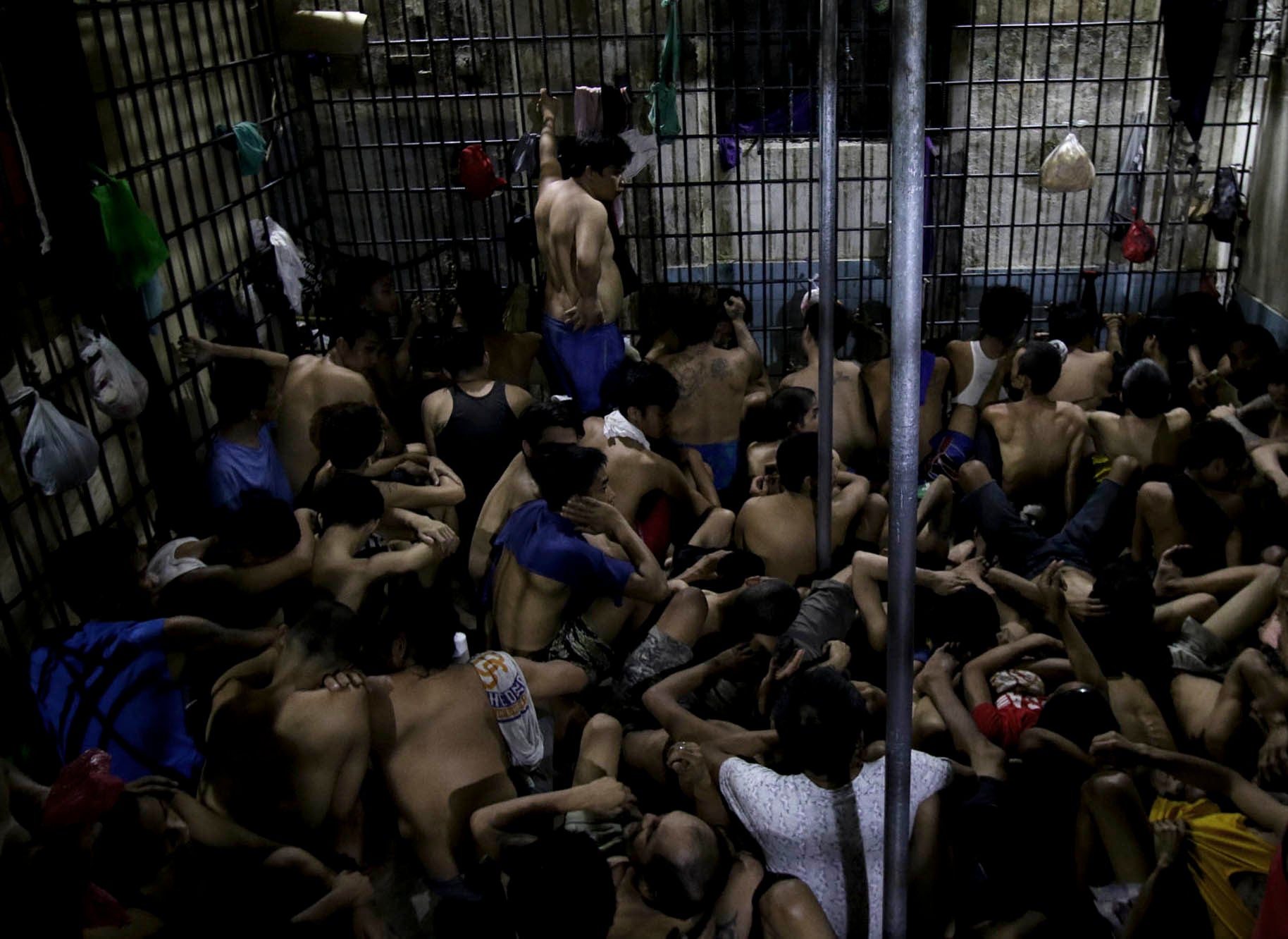 PACKED LIKE SARDINES The jail inside a police station at Central Market in Santa Cruz, Manila, typifies the condition of many detention centers across the country. —RICHARD A. REYES

As a community health worker in Barangay Payatas, Quezon City, Rowena Baltazar spends most of her time caring for the sick and vulnerable at the local health center, her work made more challenging lately by the new coronavirus disease (COVID-19) outbreak and the ensuing quarantine measures imposed on Metro Manila and the rest of Luzon.

But the 41-year-old single mother laments being unable to comfort her own son who has been languishing at Quezon City Jail (QCJ) for three years now—but whose trial has yet to begin. He is accused of sexually abusing a minor.

“I wanted to go to the city jail to bring him food and vitamins since the ECQ (enhanced community quarantine) was imposed, but I couldn’t find a ride [to] … bring me there. I couldn’t afford to rent a private vehicle,” Baltazar said. “So when I heard the news that inmates there have tested positive for COVID-19, I was so scared.”

Baltazar has long realized that her 21-year-old son, one of her four children, could be locked up indefinitely due to procedural delays. But now the coronavirus has added to her worries, especially since her detained son is asthmatic.

Such fears grow each day as they are not without basis. The QCJ is the third most populous jail in the country, holding nearly 3,700 inmates—whom the government formally calls “persons deprived of liberty (PDLs)”—in cells meant only for 300.Interior Secretary Eduardo Año initially claimed in March that Philippine jails were “100-percent COVID-19-free.”

But that assurance evaporated on April 17 when the inevitable happened: nine PDLs and nine Bureau of Jail Management and Penology (BJMP) personnel at QCJ tested positive for SARS-CoV-2, the virus that causes the severe respiratory disease.

The Bureau of Corrections later reported that 50 inmates at the Correctional Institution for Women (CIW) in Mandaluyong City and New Bilibid Prison (NBP) were infected, with three of them succumbing to the coronavirus.

On Wednesday, Cebu City Jail, the most populous in the country with 6,604 PDLs, recorded 212 cases, including 186 inmates, the biggest number of COVID-19 cases in a Philippine jail. One inmate there has died.

Mass testingThis brewing health disaster in the notoriously overcrowded, substandard Philippine jails prompted the BJMP to order the mass testing of PDLs in all of its 468 detention centers nationwide.

BJMP spokesperson Xavier Solda said the bureau was monitoring PDLs for COVID-19 symptoms, such as fever, cough and cold.

Cells are disinfected daily, and doctors and nurses are available for round-the-clock medical care, including psychological support, for PDLs, Solda said.

“We have to continue implementing precautionary measures, such as the wearing of face masks, thermal scanning, use of footbath and handwashing. Test kits for targeted testing have already been procured,” he said.

Baltazar last saw her son on Feb. 25, his 21st birthday. He had just recovered from a fever then, she recalled.

“Every time I visit him, I bring him his own medicines for asthma, as well as paracetamol, because it’s hard to find them inside jails,” she said. “Last time I saw him, he said he gave some of his paracetamol to his fellow inmates with fever. He had used up his own supply.”

To compensate for the prolonged ban on visitors, the BJMP, with the help of the International Committee of the Red Cross (ICRC), expanded its “e-dalaw” program, allowing PDLs to communicate with their loved ones online.

The ICRC has provided four electronic tablets to each of the 11 biggest jails in Metro Manila, including the isolation facility in Payatas, Quezon City, which holds inmates suspected or confirmed to be infected.

Egon Cayosa, national president of the Integrated Bar of the Philippines (IBP), said the group had urged its local chapters to help more city or municipal jails set up e-dalaw systems by lending their laptops and providing internet connection.

“Our partner sociologists have stressed that because jails are supposed to be reformatory, family contact is important. It will also help curb jail abuses,” Cayosa said.

But some relatives of PDLs, including Baltazar, said these were not enough to quell their anxiety. The overcrowding, inadequate lighting and ventilation, extreme temperature, insect infestation, among others, remained threats to health and safety of inmates, she said.

“The city jail is already full to the brim even before the ECQ. Here, we’re free but we’re afraid. Imagine what they are feeling inside the jail, in a very cramped space?” Baltazar said.

“When we go to most of our jails, the situations are really inhumane. The (COVID-19) outbreak should serve as an eye-opener,” he said.

Harry Tubangi, project manager for health in detention of the ICRC, said the World Prison Brief reported that Philippine jails are one of the most congested in the world.

“Imagine yourself in a 4.7-square-meter cell designed to accommodate one to two people,” he said, citing the cell size prescribed by the United Nations for an inmate. “Then you have 15-20 people there in reality. Physical isolation is practically impossible in those places.”

Solda acknowledged that physical distancing was “really quite a challenge” given the congestion.

The ICRC has been helping the BJMP improve its capacity to do medical screening and detecting symptoms among PDLs. It has also assisted the bureau in building isolation facilities in Metro Manila, Central Luzon, Calabarzon, the NBP and the CIW.

The 48-bed isolation center in Payatas now has 41 suspected and confirmed COVID-19 patients from QCJ. It will later be expanded to accommodate 150 beds.

Women leaders in Payatas are fearful about the presence of the isolation facility in their community, according to parish priest Danny Pilario.

“They’re scared because it’s just near the community. But they presume the government has taken precautions,” Pilario said.

Tubangi said the central task of the COVID-19 response was infection prevention and control (IPC).

“A poor IPC measure in detention facilities will be a disaster,” he said. “We could spread the virus in neighboring communities, so [jail officers] should have adequate training and know-how [in handling these cases].”

Health workers in jails have to deal with the elderly detainees, those with health risks, such as hypertension, diabetes and cardiovascular diseases, and immunocompromised individuals who have tuberculosis (TB), cancer or HIV/AIDs, Tubangi said.

He said TB cases in jails were 100 percent higher than in the general public. He cited a study done by the University of the Philippines, which showed a 4.5-percent prevalence rate for TB in jails, although the ICRC had seen rates as high 12 percent to 13 percent.

Endemic summer diseases in jails, such as boils and other skin problems, sore eyes, heatstroke, flu and diarrhea, complicate the health situation for PDLs.

Tubangi said managing the jail health system was already challenging even before COVID-19.“The capacity of jails is already stretched out at this time in terms of leadership and governance. This kind of crisis is unfamiliar territory for authorities,” he said.

He said “intensifying coordination” between the BJMP and the Inter-Agency Task Force on Emerging Infectious Diseases was “very crucial.”“It increases the political will to deal with COVID-19 in detention places,” Tubangi said.

To prevent spreading the virus to neighboring communities, he said the BJMP would need to have access to health experts and medical resources.

“Detention places are not a priority when it comes to development in the country; it’s no secret. So the emergence of cases is now a wake-up call for authorities in the criminal justice system to take a look at this—because prison health is public health,” Tubangi said.