UK overtakes Italy with most official coronavirus deaths in Europe 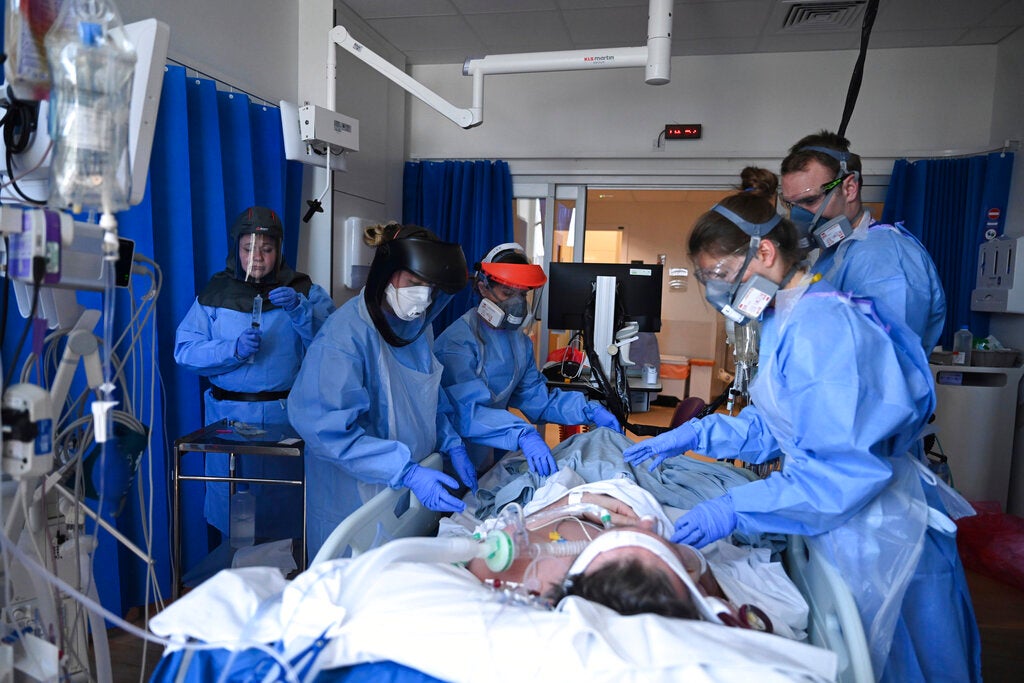 Members of the clinical staff wearing Personal Protective Equipment PPE care for a patient with coronavirus in the intensive care unit at the Royal Papworth Hospital in Cambridge, England, Tuesday May 5, 2020. (Neil Hall/Pool via AP)

The British government said another 693 people died in hospitals, nursing homes and other settings after testing positive for COVID-19, taking the total to 29,427 — above Italy’s 29,315.

Though the U.K.’s coronavirus-related death toll, when measured on a seven-day rolling basis, has been falling consistently for the past three to four weeks, the country is around two weeks behind Italy in terms of the pandemic. The tallies are likely underestimates because they do not include suspected coronavirus deaths.

Taking into account countries’ populations, the U.K.’s per capita death rate is below those in Italy, Spain and Belgium. And the U.S. is below them all even though it has the highest number of registered COVID-19 deaths with more than 70,000.

British Foreign Secretary Dominic Raab said the number of deaths was a “massive tragedy,” but added that it was too soon to make reliable international comparisons, partly because of apparent differences in the way countries report deaths.

“I don’t think we’ll get a real verdict on how well countries have done until the pandemic is over and particularly until we’ve got comprehensive international data on all-cause mortality,” he said.

There is a growing consensus among scientists and statisticians that the best way to assess deaths eventually will be to measure how many more people died than would normally have been expected to die in any particular year.

Professor David Spiegelhalter, a leading statistician at the University of Cambridge, said one certain thing is that all the official death numbers are “substantial underestimates” of those dying directly from the virus and those who died as a result of the epidemic and the measures taken in response.

“I think we can safely say that none of these countries are doing well, but this is not (the) Eurovision (Song Contest) and it is pointless to try and rank them,” he said.

“I believe the only sensible comparison is by looking at excess all-cause mortality, adjusted for the age distribution of the country,” he said. “And even then it will be very difficult to ascribe the reasons for any differences.”

Regardless of how deaths are recorded, the trends in most of the virus-related numbers in the U.K., such as the number of people requiring hospitalization with coronavirus, are heading in the right direction — but not enough to prompt the government to ease the lockdown, in place since March 23, when it is reviewed on Thursday.

Government advisers have voiced worries about the number of new cases still being recorded. Prime Minister Boris Johnson, who has recovered from COVID-19 himself, has warned of a second spike in the epidemic and that the U.K. is at the moment of “maximum risk.”

The government has come under increasing criticism over the past couple of weeks for being too slow in putting the country into lockdown, in testing for the virus and in getting critical protective gear for medical workers.

The hope in government circles is that it can pivot to a new approach in keeping a lid on the virus until a vaccine is found — more than 100,000 people can be tested each day.

A pilot program started Tuesday on the Isle of Wight, off England’s south coast, with a mobile phone app that authorities hope will help contain the outbreak once the lockdown restrictions are eased. The government wants the app, which warns people who have been near an infected individual, to be rolled out across the country this month.

“I think they are a fine example to us and we should try to emulate what they have achieved,” she said.