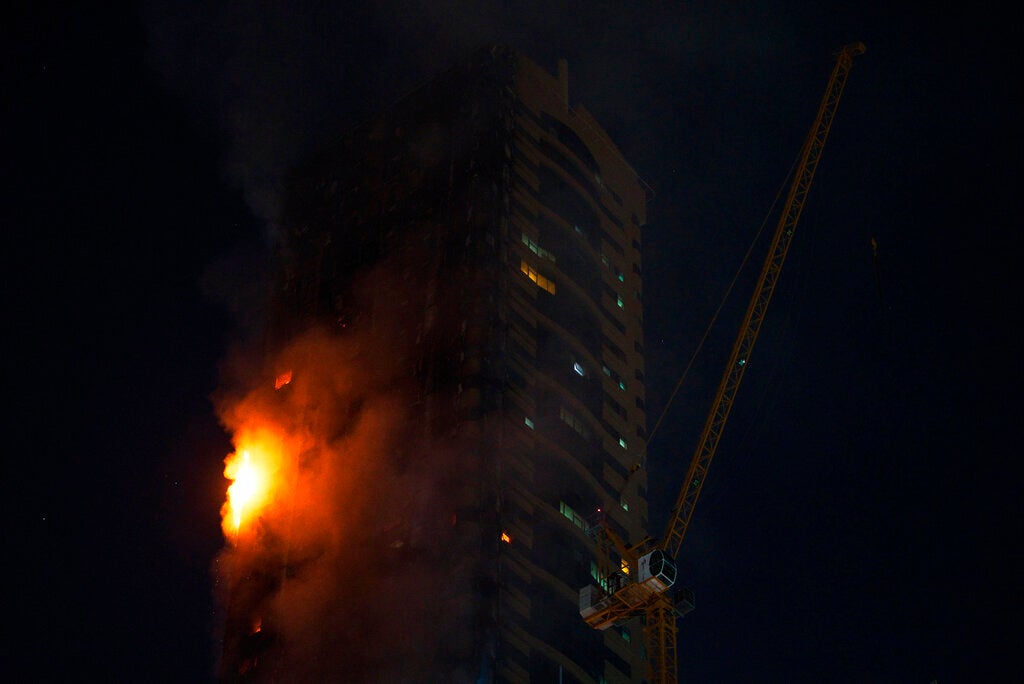 A fire burns on the side of a high-rise building in Sharjah, United Arab Emirates on Tuesday. (AP)

The blaze at the 48-story Abbco Tower in Sharjah saw flaming debris shower neighboring dusty parking lots and left metal siding littering surrounding streets. The 190-meter (623-foot) tower is among the tallest buildings in Sharjah, one of the seven sheikhdoms that makes up the UAE.

The fire started around 9 p.m., just after those fasting for the holy month of Ramadan had finished their iftar meals. At least seven people suffered minor injuries in the blaze, the government-run Sharjah Media Office said on Twitter.

Authorities gave no cause for the blaze, which smoldered into early Wednesday morning. Firefighters used a ladder truck to spray water into the building, whose cement-block walls stood charred and exposed after the fire.

Syrian Fadlallah Hassoun, who had just finished his day’s iftar meal in his apartment in the tower, told The Associated Press he initially dismissed the fire alarm as a test. He cradled his white cat Vodka, whom he rescued from the building.

“Me and family just directly went down with everything we just had and what we were just wearing and we came down immediately,” Hassoun said.

Many others similarly left the building with nothing other than their face masks required in the ongoing coronavirus pandemic. Hassoun praised authorities though for already contacting him there to help.

“They took our names so that they can see what they can do for us and help us because now we came out and we have no idea what we are going to do,” he said. “We are just waiting in the street and seeing what’s going to happen.”

The UAE, including skyscraper-studded Dubai, has suffered a spate of fires in its high-rises in recent years. The reason for the blazes, building and safety experts say, is the material used for the buildings’ sidings, called aluminum composite panel cladding.

While some types of cladding can be made with fire-resistant material, experts say those that have caught fire in the UAE and elsewhere weren’t designed to meet stricter safety standards and often were put onto buildings without any breaks to slow or halt a possible blaze. Pieces seen on the ground afterward resembled that material and the speed of the blaze suggested the tower had it.