Año says LGUs have responded to President’s concerns but warns erring officials of charges for breaking Bayanihan law
By: The Inquirer Staff and Bureaus - @inquirerdotnet
Philippine Daily Inquirer / 04:18 AM May 06, 2020 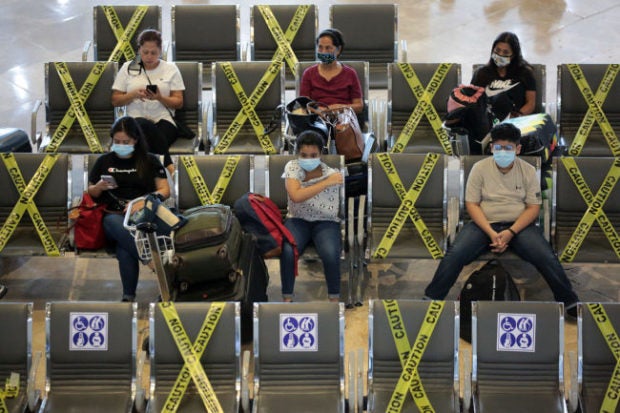 FLIGHT OUT Filipino workers wait to board their flights at the departure lobby of Ninoy Aquino International Airport’s Terminal 1 on Monday. While others are leaving the Philippines, many overseas Filipino workers have returned amid uncertainty brought about by the global health crisis. —GRIG C. MONTEGRANDE

President Rodrigo Duterte has warned local officials that they would face problems should they still refuse to accept Filipinos returning to their hometowns from jobs abroad despite presenting health clearances.

The President issued the notice in a televised address on Monday night after receiving reports that some local government units (LGUs) had denied entry to overseas Filipino workers (OFWs) to prevent the spread of the new coronavirus disease (COVID-19) in their communities.

“If the Department of Health, Secretary (Francisco) Duque (III), would certify that she has undergone the test not only against the presence of antibodies but the virus itself, that she is virus-free, then we have to make arrangement that they can go home,” he said.

Local officials, Duterte said, would “have a problem if you resist,” as he vowed to “see to it that everything is done fair.”

But the President said he understood why local officials acted in such a manner as they wanted to stop COVID-19 from spreading in their areas.

“I’d like to address myself to the local executives, it is your duty to help and protect your constituents. I have no quarrel that you want the contagion stopped right there, there at the doorstep. Just don’t enter here, because you contaminate the whole of the family in the house,” he said.

In his sixth report to Congress on Monday, the President said 11,973 overseas Filipino workers had completed their 14-day mandatory quarantine. He said 23,871 Filipinos had been repatriated from other countries.

Duterte said the government would look for ways to bring them to their home provinces and ensure that they were tested and cleared of COVID-19.

“We have a stalemate here. What do we do with people waiting even if they are OK? So you have to go into testing each and every one of them, and find out if they are fit to return and that she or he is not a threat to the community,” he said.

Interior Secretary Eduardo Año said local officials had already responded to the concerns of returning OFWs even before Duterte raised the issue on Monday night.

According to Año, the Inter-Agency Task Force on Emerging Infectious Diseases (IATF-EID) has crafted a new protocol on allowing the return of OFWs to their hometowns.

“They (OFW) should have undergone PCR (polymerase chain reaction) test. If negative (for COVID-19) after two or three days, the OFW can return to the hometown or city. It would depend on the LGU if it would make further tests upon arrival of the OFW who can already be placed on home quarantine. That’s acceptable for everyone,” he said.

But Año said local officials who would still reject returning workers despite following the new IATF-EID protocol would face charges for violation of the Bayanihan Act.

In Bohol province, Gov. Arthur Yap has temporarily stopped the return of OFWs to the island while authorities had yet to have a “definitive finding” on the condition of the first batch which arrived there on April 28.

In a statement on Monday, Yap noted confusion on the state of the first batch of 48 workers and instructed the provincial health office to give all of them another PCR test and continuously monitor their condition.

News that two had tested positive for COVID-19 has worried Boholanos who had thought that the province remained free of the virus. As of May 3, the Department of Health (DOH) COVID-19 tracker showed that Bohol had three confirmed cases—two active and one recovery.

Yap said he was cautioned not to make any conclusions yet because the DOH in Central Visayas wanted to make sure about the findings through another round of tests.

Iloilo City Mayor Jerry Treñas and the IATF-EID in Western Visayas stressed that Iloilo had not stopped OFWs from coming home.

“Maybe the wrong information has reached [President Duterte],” Treñas told the Inquirer. “We did not reject any trip (of OFWs coming home). What we are trying to do is to make sure that the protocols are followed and that all these are properly coordinated,” he said.

Roy Villa, the IATF-EID regional spokesperson, said: “We don’t how what information and how it reached the President. But it is not correct that Iloilo City is refusing to allow OFWs to come home.”

In Mindanao, Davao City officials braced for the arrival of at least 500 stranded residents and OFWs aboard sweeper flights that the city earlier arranged from Metro Manila and Clark, Pampanga.

The city government approved the use of rapid antibody tests to screen the returning residents although Mayor Sara Duterte said test results would still need to be confirmed by PCR tests at Southern Philippines Medical Center.

In Cagayan de Oro City, 46 OFWs who came from Luzon on Thursday underwent another round of quarantine procedures.