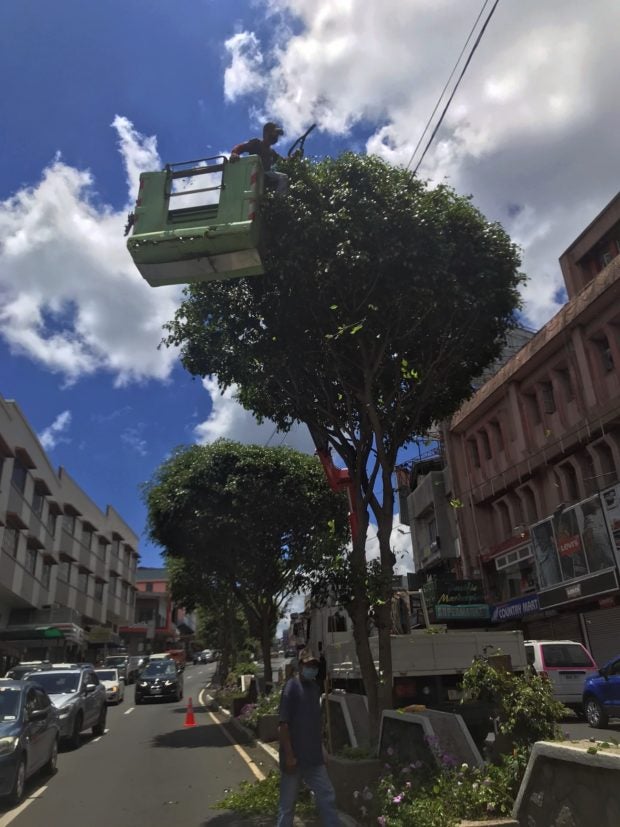 Baguio gardeners trim trees along Session Road in Baguio City on Tuesday, after discovering that the slowdown of human activity seemed to have rejuvenated Baguio’s flora during the quarantine. Vincent Cabreza

BAGUIO CITY –– The city’s gardeners on Tuesday (May 5) began sprucing up roadside islands and Baguio parks, after observing that flowers and trees have been rejuvenated in the last two months of the Luzon quarantine, the city environment and parks management office (Cepmo) said.

The revitalized parks would be featured in an online tour of Baguio called “Dream Now, Travel Later,” which was developed by Tourism Officer Aloysius Mapalo to “whet the appetites of tourists about a return to Baguio,” Diwas said.

Tourism remains at the bottom of a list of industries that have been prioritized for reopening in light of 24-hour curfew restrictions.

Mapalo has been posting online photographs and videos of popular Baguio destinations hoping to sustain interest in the country’s summer capital.

The absence of park visitors appears to have benefited the environment.

Park management employees have noticed that the flowers planted in mini-parks along major streets have flourished because of the drop in human activity, Diwas said.

“We could not grow begonias at the mini-islands along Magsaysay Avenue in 2016 because of the vehicular smoke. Now they’re blossoming,” Diwas said.

Ceomo gardeners began preparation work on the Botanical Garden so they can lay out new flower beds in time for the monsoon season, he said. Rains have been falling in the city since last week.

After May 15 when the extended Baguio quarantine is lifted, many of the Cepmo staff would be put to work laying down new landscapes at the Botanical Garden, such as lush carpets filled with yellow margarets to accentuate a section filled with elephant statues donated by the Thai Royal Family.

Diwas said Cepmo intends to plant new pine trees at an Arboretum that is being constructed near the Botanical Garden, as well as introduce decorative trees like the Jakaranda.

An arboretum is a tree garden, which would be augmented with elevated walkways that lead into the Garden.

A water system will also be installed at the Garden to sustain the flower beds that would be planted there.

Cepmo also plans to add more flowers at the Malcolm Square at the central business district.

He said flowers and trees have also become robust in major promenade areas like the iconic Burnham Park, which has not been visited by Baguio families nor tourists since March 17.

Burnham Park is being rehabilitated by the Tourism Infrastructure and Enterprise Zone Authority, but development work there slowed down due to the lockdown.

As of May 2, Baguio has recorded 30 patients infected with the coronavirus disease, 15 of them still undergoing treatment at the Baguio General Hospital and Medical Center.

The city health services office said the city has 372 patients suspected of having contracted the virus, while 1,294 people have been classified as probable COVID-19 cases.