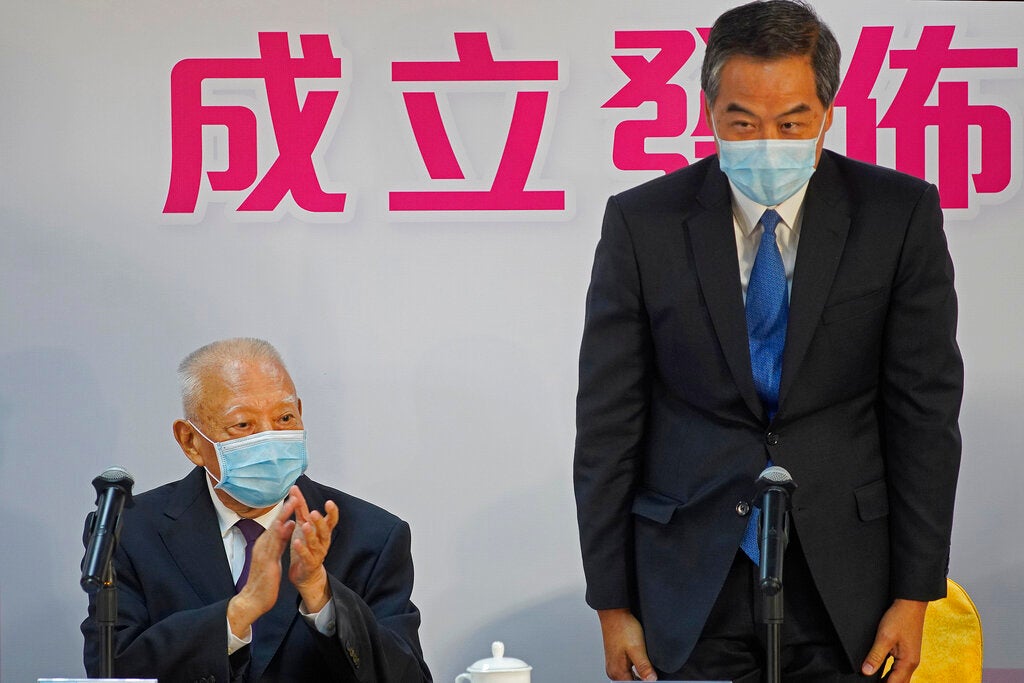 Tung and Leung said the new Hong Kong Coalition will support employment by creating jobs, providing internships and offering volunteer work to fresh graduates. They did not provide details of how they would do that.

“We will give full play to ‘One Country, Two Systems’ and recover our economy, and continue to safeguard the rule of law so that we can achieve stability and prosperity in Hong Kong,” said Tung, who led the city from 1997 to 2005.

Hong Kong was riven by anti-government protests last year against what critics see as growing Chinese influence in the city’s affairs. The former British colony was handed back to China in 1997 under the “one-country, two-systems” framework in which Hong Kong was given freedoms not enjoyed on the mainland and promised a high degree of autonomy over local affairs for 50 years.

During the protests, hundreds of thousands took to the streets and violent clashes erupted between police and hard-line demonstrators. Among the protesters demands was the direct election of the city’s leader, currently picked by a committee.

The launch of the coalition comes a day after Hong Kong said its economy contracted 8.9% year-on-year for the first three months of 2020, the largest decline on record. The city’s unemployment rate in March hit 4.2%, the highest in over nine years and an increase for the sixth consecutive month.

The city’s economy has taken a battering since the protest movement, which affected the tourism, retail and restaurant industries, and has been further battered by the coronavirus pandemic.

“If we look back to the history of Hong Kong, we see that our people are resilient and we always rise from hardship,” said Leung, who was the city’s chief executive from 2012 to 2017. “I believe, with joint effort, we will solve every one of these social problems.”

The coalition says it has 1,545 members from all walks of society, including health workers responding to COVID-19 and young people.

Hong Kong chief executive Carrie Lam said Tuesday that the economic contraction was “worse than expected.” but pledged to keep up government expenditure and investment to safeguard the economy.

Lam said Hong Kong would relax some of its social distancing measures, allowing businesses such as gyms, cinemas and beauty salons to reopen and doubling the number of individuals at public gatherings to a maximum of eight. Some students will also resume classes from the end of May.