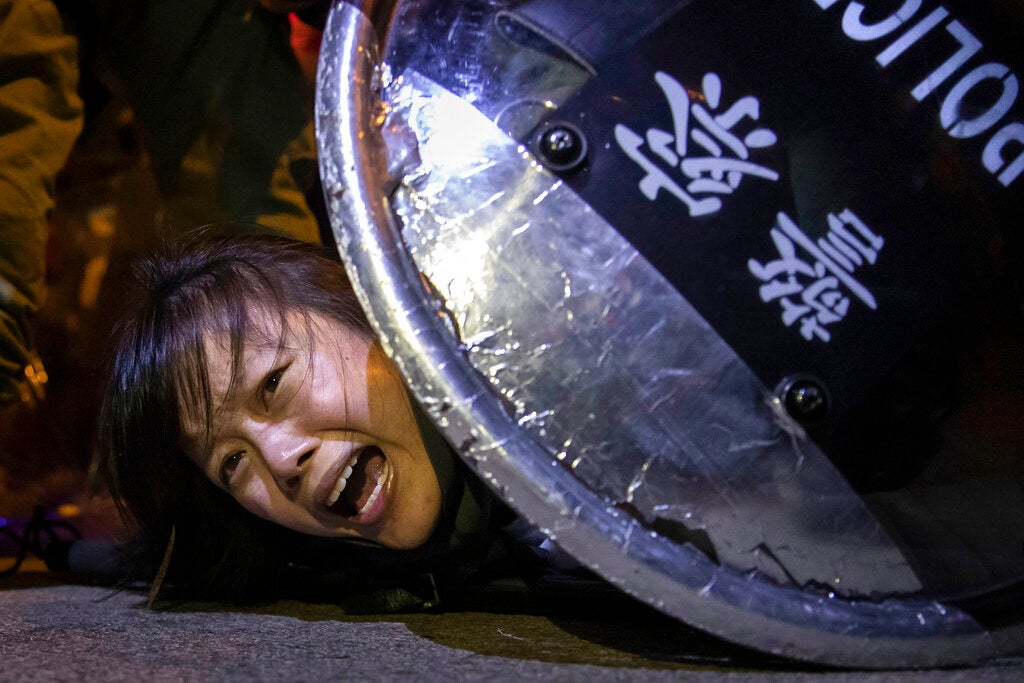 This Sept. 2, 2019 photo by Reuters photographer Tyrone Siu, provided by Columbia University, shows an anti-extradition bill protester detained by riot police during skirmishes between the police and protesters outside Mong Kok police station, in Hong Kong, China. The photography staff of Reuters was awarded the 2020 Pulitzer Prize for Breaking News Photography, in New York on Monday. (Courtesy of Reuters via AP)

NEW YORK  — The Anchorage Daily News and ProPublica won the Pulitzer Prize in public service Monday for illuminating the sparse policing of remote Alaskan villages, as a delayed awards ceremony recognized writing, photos and — for the first time — audio reporting on topics ranging from climate change to the legacy of slavery.

The public service winners contacted 600 village, tribal and other local governments and traveled by plane, sled and snowmobile to reveal that a third of rural Alaska communities had no local police protection, among other findings.

The “riveting” series spurred legislative changes and an influx of spending, the judges noted in an announcement postponed several weeks and held online because of the coronavirus pandemic.

“We’re humbled by the recognition, but the stories put a bright light on serious problems in Alaska that have needed attention for a long time,” Daily News Editor David Hulen said. “In some ways, we’re just getting started.”

The New York Times won the investigative reporting prize for an expose of predatory lending in the New York City taxi industry and also took the international reporting award for what the judges called “enthralling stories, reported at great risk,” about Russian President Vladimir Putin’s government.

The Times also was awarded the commentary prize for an essay that Nikole Hannah-Jones wrote as part of the paper’s ambitious 1619 Project, which followed the throughlines of slavery in American life to this day.

Times Executive Editor Dean Baquet told the staff — in a virtual meeting — that this year’s prizes were “particularly meaningful because they come as we are managing our lives under great difficulty even as we produce great journalism.”

The Washington Post’s work on global warming was recognized for explanatory reporting. The newspaper tracked nearly 170 years of temperature records to show that 10% of the planet’s surface has already exceeded a rise of 2 degrees Celsius (3.6 Fahrenheit) over pre-industrial times, the threshold world leaders have agreed they’d try not to exceed.

In a development that recognized how podcasting has brought new attention to reporting aimed at listeners rather than readers or viewers, a first-ever award for audio reporting went to “This American Life,” the Los Angeles Times and Vice News for “The Out Crowd,” an examination of the Trump administration’s “remain in Mexico” immigration policy.

In another prize for the Los Angeles Times, Christopher Knight won the criticism award for what the judges called “extraordinary community service by a critic” in examining a proposal to overhaul of the L.A. County Museum of Art.

The staff of The Courier-Journal of Louisville, Kentucky, took the breaking news reporting award for unpacking racial disparities and other issues in a spate of governor’s pardons.

ProPublica Managing Editor Robin Fields said its reporting “laid bare the avoidance of responsibility by the military’s most senior leaders.”

The local reporting award went to The Baltimore Sun for shedding light on a previously undisclosed financial relationship between the mayor and the public hospital system, which she helped oversee.

The New Yorker took the feature reporting prize for Ben Taub’s piece on a detainee at the U.S. military base at Guantanamo Bay, Cuba. New Yorker contributor Barry Blitt got the editorial cartooning award for work that “skewers the personalities and policies emanating from the Trump White House,” as the judges saw it.

The Associated Press won the feature photography prize for images made during India’s clampdown on Kashmir, where a sweeping curfew and shutdowns of phone and internet service added to the challenges of showing the world what was happening in the region.

AP photographers Dar Yasin, Mukhtar Khan and Channi Anand snaked around roadblocks, sometimes took cover in strangers’ homes and hid cameras in vegetable bags to capture images of protests, police and paramilitary action and daily life. Then they headed to an airport to persuade travelers to carry the photo files out with them and get them to the AP’s office in New Delhi.

“These journalists’ courage and compelling storytelling show the absolute best of what we do,” AP Executive Editor Sally Buzbee said.

Reuters won the breaking news photography award for its coverage of protests that shook Hong Kong. Editor-in-Chief Stephen Adler said the photos “brilliantly captured the magnitude of the protests.”

While big outlets and collaborations got plenty of recognition, the small Palestine Herald-Press, in East Texas, got a Pulitzer of its own, for Jeffery Gerritt’s editorials on the deaths of jail inmates awaiting trial. Judges said Gerritt “courageously took on the local sheriff and judicial establishment, which tried to cover up these needless tragedies.”

In the arts categories, Michael R. Jackson’s musical “A Strange Loop,” about a man trying to write a musical, won the drama prize. And Colson Whitehead’s “The Nickel Boys” won the fiction prize; he also won in 2017 for “The Underground Railroad.”

The Pulitzer board also issued a special citation Monday to the trailblazing African American journalist and civil rights activist Ida B. Wells, noting “her outstanding and courageous reporting” on lynchings.

Wells was a journalist and publisher in the late 1800s and later helped found civil rights and women’s suffrage groups; she died in 1931. The board said the citation comes with a bequest of at least $50,000 in support of Wells’ mission, with recipients to be announced.

The initial Pulitzer ceremony, which had been scheduled for April 20, was pushed to give Pulitzer Board members who were busy covering the pandemic more time to evaluate the finalists.

The awards luncheon, traditionally held at Columbia University in May, will be postponed. Plans are coming for a fall celebration.

The Pulitzer Prizes in journalism were first awarded in 1917 and are considered the field’s most prestigious honor in the U.S.