ATHENS — No job at all, or a job without enough virus protections — millions of workers around the world are marking international labor day trapped between hunger and fear, as more countries and states reopen for business even though the pandemic is far from vanquished. 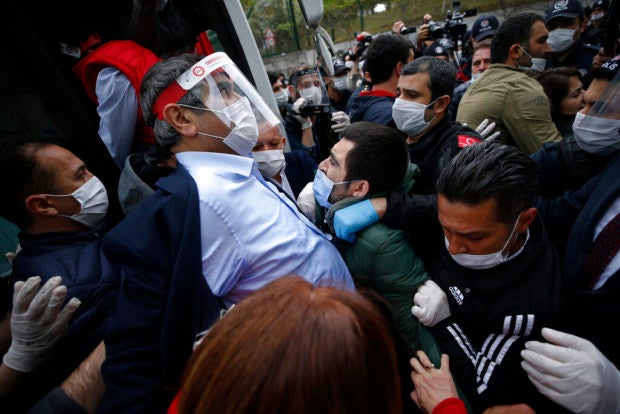 A demonstrator, wearing a face mask for protection against coronavirus, gestures as he is pushed along with others into a police vehicle after being arrested by Turkish police officers during May Day protests in Istanbul, Friday, May 1, 2020. Police in Istanbul detained several demonstrators who tried to march toward Istanbul’s symbolic Taksim Square in defiance of the lockdown imposed by the government due to the coronavirus outbreak. AP Photo/Emrah Gurel

Beijing’s Forbidden City cracked open its doors and shopping malls from Texas to Indiana are set to do the same Friday, as world leaders try to find a way to salvage virus-battered economies without unleashing new waves of infections.

It’s a melancholy May Day for millions of garment industry workers across southeast Asia like Wiryono, a father of two in Indonesia’s capital who was laid off last month as retailers slashed orders. His side gig delivering coffee dried up, too, amid the virus lockdown. So he set up a clothing repair business to make ends meet.

“I don’t earn as much as I got from the clothing factory. But I have to feed my wife and kids every day,” said Wiryono, who goes by only one name.

In Bangladesh, production is starting back up even though the number of new confirmed cases of a virus that has infected more than 3.2 million and killed at least 230,000 is continuing to rise.

“Either we want people dead, or we want something else. The first priority is to protect,” French far-left union leader Philippe Martinez said Friday on France-Inter radio.

He praised France’s temporary unemployment measures and state health care system but said that’s not enough, warning that teachers could refuse to return to work when French schools start reopening May 11 if their safety isn’t guaranteed.

Lockdowns couldn’t extinguish the May Day protest spirit in Greece, where demonstrators lined up two meters apart in careful rows in Athens’ Syntagma Square. Organizers, wearing masks and gloves, used tape measures to set out exact positions for the protesters to stand, marking the positions with large colored squares.

May Day labor protests started in the 19th century in the U.S., where the number of Americans filing for unemployment benefits surpassed a staggering 30 million this week. Economists say joblessness in April could hit numbers not seen since the Great Depression of the 1930s.

Essential workers will strike around the U.S. on Friday to demand safer conditions during the coronavirus outbreak, while other groups plan rallies against tight stay-at-home orders they say are crippling the U.S. economy.

Lacey Ward, an Omaha hairstylist, said she is worried that the Nebraska governor’s decision to let salons reopen on May 4 could put her and her family at risk. She would prefer to collect unemployment until the danger subsides.

“I feel like we are literally the guinea pigs in this situation,” she said.

May Day is a state holiday in many countries, and lockdowns mean this is the first time that Russia — whose prime minister has the virus — will not hold big demonstrations on Red Square.

In Turkey, police and demonstrators wearing masks and face guards faced off in Istanbul, and 15 people were detained for trying to march to a symbolic square in defiance of a lockdown.

A special “noisy protest” is planned in the Czech Republic, where people will honk horns, play drums or shout at midday to express anger at the government’s handling of the crisis. And hundreds of Czechs who commute to work in Germany and Austria plan to block a border crossing to protest restrictions imposed on them amid the pandemic.

A holiday atmosphere enlivened South Africa’s streets Friday, as the May Day holiday is also when the country has begun easing its strict lockdown. People were permitted to walk outside for exercise and some are returning to work in small batches.

China’s ancient, majestic Forbidden City reopened on Friday with all tickets for the May 1-5 holiday sold out, and a limit of 5,000 visitors a day, down from the earlier maximum of 80,000. The Chinese capital reopened its parks and museums, with controlled entries, about three months after hundreds of millions of people were ordered into a near lockdown as the coronavirus outbreak erupted in the central city of Wuhan.

Malaysia will allow most business activities to resume Monday but keep schools and houses of worship shut. Thailand was preparing to reopen parks and some retailers, hair salons and restaurants, while keeping a nighttime curfew and a ban on alcohol sales.

In the U.S., Louisiana restaurants will be allowed Friday to add outdoor tables, without wait staff, though hard-hit New Orleans will remain shut.

“The coronavirus is still out there,” he said. “We need that tool so we can open up the economy.”

President Donald Trump chose not to extend the White House’s social-distancing guidelines past their expiration Thursday. Those guidelines encouraged people to work from home and avoid restaurants, groups and nonessential travel.

Trump continued to speculate on the origins of the coronavirus, and intelligence agencies said they are still examining a notion put forward by the president and aides that the pandemic may have resulted from an accident at a Chinese lab.

The virus has killed over 230,000 worldwide, including more than 61,000 in the U.S., according to a tally by Johns Hopkins University. Confirmed infections globally topped 3.2 million, with 1 million in the U.S., but the true numbers are believed to be much higher because of limited testing, differences in counting the dead and concealment by some governments.