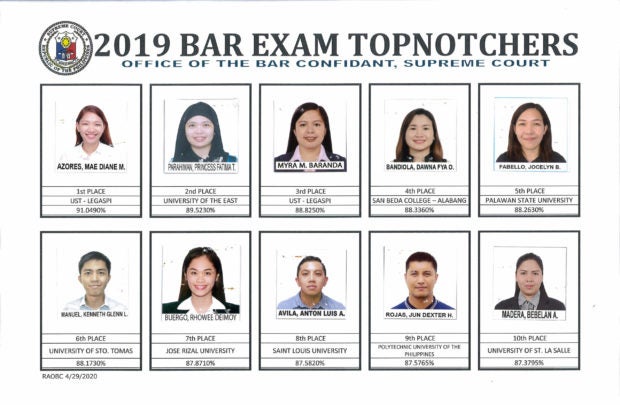 It was a bittersweet triumph for Mae Diane Azores, a certified public accountant (CPA), when she topped the 2019 bar examinations, the first graduate of the University of Santo Tomas-Legazpi to gain that distinction.

She said her grandmother died on March 18 before seeing her fulfill her childhood dream of becoming a lawyer.

“Since childhood, I felt that this is for me. Growing up, I saw how influential and valuable being a lawyer is because you can help other people,” Azores said.

The Supreme Court on Wednesday announced that 2,103 passed the bar out of 7,685 law graduates who completed the four-part exam last November.

The 27.36-percent passing rate, the second-highest in two decades, resulted from the court’s decision to lower the passing average from 75 percent to 74 percent, according to Senior Associate Justice Estela Perlas-Bernabe, who chaired the 2019 exams.

The Supreme Court saw the need for “younger and more technologically adept lawyers to help different fronts of society as we meet the peculiar challenges brought by the COVID-19 pandemic and transition to the new normal,” Perlas-Bernabe said in her message released on YouTube.

“Our society especially during these most trying times beckons you to not only become learned experts but more so to fight for the cause of the oppressed, to advance the pleas of the helpless, and to inspire others as a leading example of integrity above all,” she said.

Top of her class

Azores received the highest overall rating of 91.049 percent, while Myra Baranda, 26, her classmate, received the third highest score of 88.825 percent.

Second-placer Princess Fatima Parahiman, who scored 89.523 percent, was the law class valedictorian of the University of the East (UE).

One examinee who flunked the test in 2018 not only passed this time but also landed in fourth place.

San Beda College-Alabang’s Dawna Fya Bandiola, who scored 88.336 percent, said she was “super devastated” when she failed in her first attempt.

Failing the first time, however, taught her that “not everything will be given when you want them.”

“There are times you have to experience rejection so you will realize the importance of things that you do not normally pay attention to,” Bandiola said in a radio interview.

1st for Palawan U

“Actually, with just passing, I would be very grateful,” she said. Landing fifth was a “bonus” as her prayer was just to pass the bar.

She graduated with high honors from the UP Integrated School and finished her bachelor of science degree at UP Diliman. She also took up a diplomat course in cultural development in Turin, Italy. Fabello is also a former disc jockey for a radio station in Puerto Princesa City.

A member of the UST Law Debate and Moot Society, Manuel was first overall best speaker in the 2019 Conflicts of Law Debate Competition hosted by the Association of Law Students of the Philippines.

For the family of Anton Luis Avila, bagging eighth place in the exams was the “best news his family received in this season of COVID-19,” according to his father, Edgar Avila, also a lawyer and former city councilor.

Polytechnic University of the Philippines (PUP) also broke into the Top 10 for the first time with Jun Dexter Rojas who was in ninth place with 87.5765 percent.

Bebelan Madera, another CPA, made it as tenth placer despite being under medication for pneumonia when she took the exams.

The 32-year-old was last year’s valedictorian of the University of Saint La Salle College of Law in Bacolod City.

The Supreme Court said this year’s bar exams would be postponed “in view of the increasing number of COVID-19 cases in the country” and the “social and economic disruption” caused by the pandemic and the enhanced community quarantine.

It said the exams “shall definitely be held sometime in 2021.”

The next bar exams will also be held in Cebu City, the first time they will be held outside Metro Manila, as recommended by Associate Justice Marvic Leonen, who will act as the chairperson.