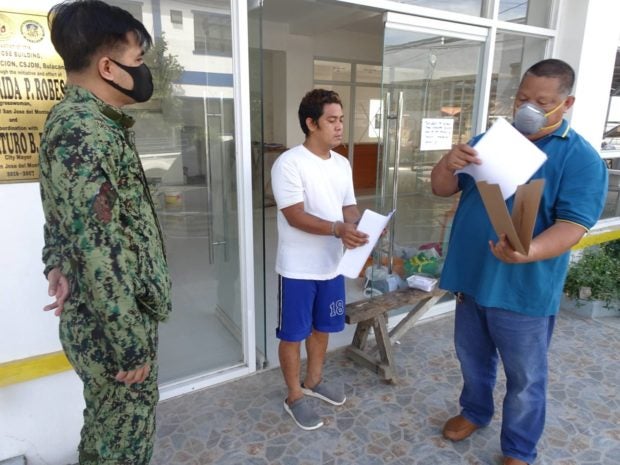 The MMDA has dismissed metro aide (street cleaner) Roel Gatos (center) after he was caught on video allegedly assaulting his live-in partner and her child. (Photo courtesy of the MMDA)

MANILA, Philippines — A metro aide (street cleaner) of the Metropolitan Manila Development Authority (MMDA) has been sacked after being caught on video assaulting his live-in partner and her child.

In a statement on Wednesday, the MMDA said that Roel Gatos was dismissed on Tuesday for alleged physical assault of his partner, Irene dela Vega, and her child in San Jose del Monte, Bulacan.

The assault was caught on video that later went viral on social media, Radyo Inquirer 990AM reported.

“Based on the attending facts, it is very clear that you [Gatos] have committed disgraceful and immoral acts, which are conduct prejudicial to the best interest of the MMDA being a public employee,” MMDA Chairman Danilo Lim said in a resolution on Gatos’ termination.

The MMDA added that officials also went to Dela Vega’s home to hand over groceries as aid during the enhanced community quarantine put in place over the whole of Luzon due to the coronavirus disease (COVID-19) threat.

Meanwhile, Gatos is detained at the San Jose del Monte City Police Station pending the filing of a case violations of the Anti-Violence Against Women and Their Children Act of 2004 and the Special Protection of Children Against Abuse, Exploitation and Discrimination Act.