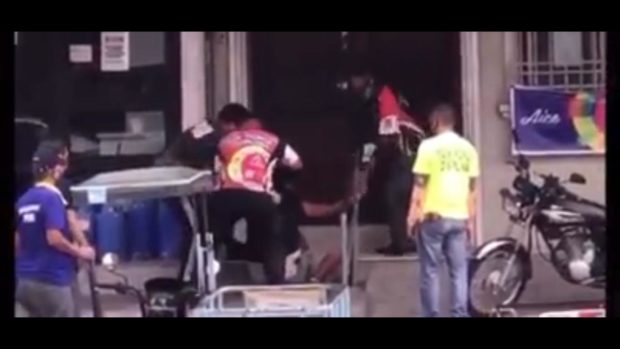 A screenshot of a viral video of Quezon City operatives mauling a fish vendor for failure to wear a face mask.

MANILA, Philippines — The local government of Quezon City on Wednesday said that it issued show-cause orders against the QC Task Force Disiplina personnel to explain why did they beat up a fish vendor along Panay Avenue in Barangay South Triangle for not wearing a face mask.

In a statement, the QC LGU said that the city’s legal department issued the order against the officers involved, which requires them to submit a written explanation concerning their actions.

“It has also sent lawyers and investigators to the scene to acquire evidence necessary for the just resolution of this matter,” the QC LGU added.

This comes after members of the Task Force Disiplina were caught on video beating up fish vendor Michael Rubuia for not wearing a face mask, which was a violation of enhanced community quarantine guidelines.

Ludovica also ordered to withdraw the complaint against the fish vendor, as the latter was previously charged with resistance and disobedience to persons of authority.

Rubuia is currently detained at the Kamuning Police Station.

The fish vendor will also be turned over to the Quezon City Drug Treatment and Rehabilitation Center (Tahahan) at Barangay Payatas for “assessment, evaluation, treatment, and care” after he tested positive for drugs.

“While the release of Michael is being processed, the city [government] will see to it that his rights as a detainee are rightfully observed and all his basic needs are properly addressed,” the local government said.