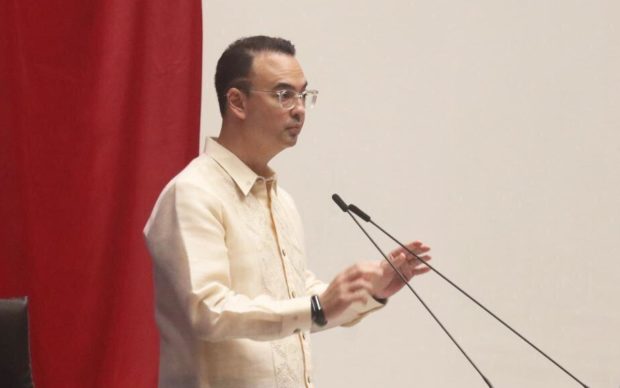 MANILA, Philippines — Marikina City Rep. Stella Quimbo is urging the Department of Budget and Management (DBM) to reconsider its austerity measure of cutting allocations for government programs not related to efforts to contain the COVID-19 pandemic.

Quimbo said the measure would reduce spending on infrastructure projects that would create jobs and help keep the economy afloat during this global health crisis.

Cutting back on such projects, she explained, would lead to the loss of over a million jobs and a significant decline in the growth of the gross domestic product.

Quimbo agreed with Speaker Alan Peter Cayetano that funds for infrastructure projects under the 2020 national budget should be left untouched to provide the economy with the stimulus it would need during and after the COVID-19 pandemic.

“Given its multiplier effects, a conservative estimate would show that a P100 billion loss in the infrastructure budget would translate into a corresponding drop in GDP valued at P300 billion,” said Quimbo, the co-chair of the economic cluster of the Defeat COVID-19 Committee in the House of Representatives.

She is also a former professor and department chair of the UP School of Economics.

According to Quimbo, if labor accounts for 37% of the P100 billion cut in infrastructure spending, then the loss in wages would amount to P111 billion.

“If workers are paid P500 per day for 22 days per month for a period of 6 months, then total wages would amount to P66,000 per worker. Hence, a loss of P111 billion in wages for every P100 billion cut in infrastructure spending would mean 1.68 million workers losing their jobs,” said Quimbo

Under National Budget Circular No. 580, the DBM said 35 percent of programmed appropriations under the 2020 national budget will no longer be made available for release to government agencies starting April 1 this year.

The DBM also said at least 10% of the total released allotments to national government agencies for maintenance and other operating expenses (MOOE) and capital outlays not related to the COVID-19 response efforts would no longer be available for obligation.

Cayetano also questioned the circular as this could mean a reduction in spending for President Rodrigo Duterte’s flagship “Build, Build, Build” program.

The Speaker said the provisions of he Bayanihan To Heal As One Act should be applied by the DBM to address the funding requirements to combat COVID-19.

Quimbo recalled that the head of the economic team, Finance Secretary Carlos Dominguez III, had also underscored the need to sustain funding for infrastructure projects to help restart the economy and generate jobs and other livelihood opportunities once the COVID-19 pandemic could be effectively contained.

Dominguez, she said, even committed to keep the budgetary allocations for the “Build, Build, Build” program intact during the recent hearing of the economic cluster of the Defeat COVID-19 Committee held online.

Dominguez pointed out during the virtual hearing that on top of realigning savings from the 2019 and 2020 national budgets as authorized by the Congress under the Bayanihan Law, the government can cover the funds needed to defeat COVID-19 and revitalize the economy once the crisis is over by borrowing from the domestic market and multilateral lenders such as the World Bank and Asian Development Bank.

The committee at that time had tackled the proposed Philippine Economic Stimulus Act (PESA), which is a consolidation of the fiscal stimulus bills filed by Quimbo and Albay Representative Joey Salceda, the chair of the House ways and means committee.

The PESA aims to help transition the economy to a post-COVID-19 scenario, ensure business continuity, retain and create jobs, and protect poor families and other vulnerable sectors.

Quimbo’s version of the economic recovery measure calls for a fiscal stimulus amounting to P370 billion, which is on top of the estimated P330 billion that the government would spend under the Bayanihan To Heal As One Act.

“A fiscal stimulus package is needed to help businesses avoid losses, keep businesses as going concerns, and avoid worker layoffs. Business confidence needs to be restored: a vibrant business community is needed to keep employment levels high, so that levels of economic growth as targeted are achieved and, more importantly, are inclusive,” Quimbo said.

Rather than curtail infrastructure spending, Quimbo and other lawmakers even proposed that the consolidated PESA should provide additional funding of P650 billion for the “Build, Build, Build” program so that it could be expanded to cover projects in universal health care, education, and food security.

These include projects for the construction, development, improvement or renovation of modern health facilities that will complement the Universal Health Care Law and national preparedness for surges in demand for pandemics; public-school facilities with the aim of creating “Schools for the Future,” or schools geared towards competitiveness in the Fourth Industrial Revolution; infrastructure supportive of creative industries; and infrastructure for the agri-fishery industry geared towards food security and ensuring public health and nutrition.