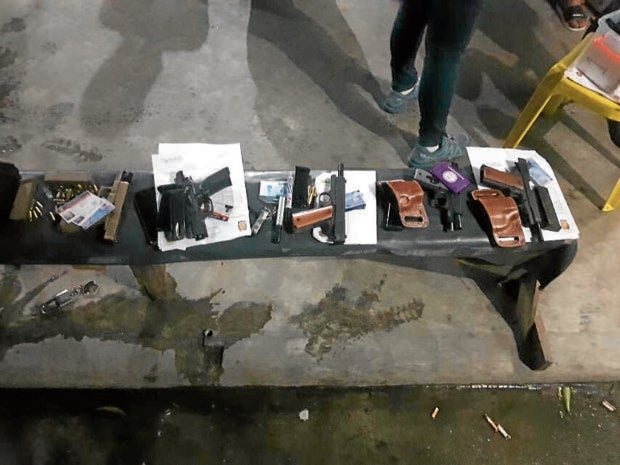 ARMED AT WORK Police said five pistols were confiscated from some of the Chinese workers arrested in Parañaque City on Friday night for allegedly running an illegal offshore gaming operation in violation of city ordinances and national health emergency regulations imposed due to the COVID-19 outbreak. —PHOTO COURTESY OF THE SOUTHERN POLICE DISTRICT

MANILA, Philippines — Parañaque Mayor Edwin Olivarez on Saturday urged immigration authorities to deport 44 Chinese nationals who were arrested along with nine Filipinos in a raid on an illegal Philippine offshore gaming operation (Pogo) at a house in his city where police seized firearms, cash and computers.

The clandestine operation was a “clear affront against our city’s ordinances and laws during this time of crisis because of the coronavirus pandemic,” Olivarez said in a statement following the Friday night raid in Barangay Tambo.

“As such, they must never be allowed to return and be banned from the city from now on,” he added.

Agents from the National Capital Region Police Office seized three .45-caliber and two 9mm pistols and around 65 rounds of ammunition from the Chinese, plus 400 cell phones, 17 desktop computers, 36 laptops, nine modems and around P1.3 million.

At least 73 Chinese passports were also confiscated, but the authorities were not immediately certain whether some were duplicates or they belonged to those who were not in the house during the raid.

“It was operating illegally and was not registered with Pagcor,” she said.

The police raided the house after residents reported seeing several Chinese men outside, after curfew hours, with firearms tucked in their waists.

A livid Olivarez said the illegal Pogo “tarnished the image of the city,” where disputes have erupted among residents over whether they should allow thousands of mostly Chinese Pogo workers to set up shop or live in their villages.

The mayor said the Chinese and Filipino operators would be facing several charges, including operating without work or business permits, illegal assembly in violation of the city’s ordinances on the enhanced community quarantine (ECQ), illegal gambling and telecommunications fraud.

He also ordered an investigation of the possible collusion between the barangay officials and the gaming operators.

Domingo said even legal Pogo companies were complying with the regulator’s suspension order that coincided with the ECQ that had been imposed on Luzon since March 17.

“I commend the Philippine National Police for this successful raid,” she said.

The Pagcor chief had earlier asked the Inter-Agency Task Force to allow legal Pogo companies to operate using work-from-home setups, adding that the government stood to lose as much as P6 billion in fees and royalties due to the suspension of gaming operations. Authorities have yet to rule on this proposal.

The decision to allow Pogos to resume operations would have to be weighed against the health risks.

“Will the risks be minimized through social distancing and could Pogos be run through a work-from-home scheme?” he asked.

When Domingo suggested a work-from-home arrangement for Pogos last month, the management of at least two condominiums housing Chinese workers immediately opposed it, saying gambling was not allowed in their properties and that their electrical systems were suited only for light residential use.

House Deputy Minority Leader and Bayan Muna Rep. Carlos Isagani Zarate on Saturday said Pogos should not only remain shut but permanently banned as they posed both health and security threats to the country.

“With this recent development, it is really justified that Pogos should remain closed because they are skirting our laws and making a mockery of our drive against COVID-19,” he said in a statement.

According to Zarate, the security concerns raised against Pogos were still “very valid” because “China has the means, capacity and motive to use these hubs for its own expansionist military and political purposes.”

“Another compelling reason for its continued closure and even total ban is that these Pogos may become potential centers for COVID-19 spread and transmission to others,” he said.

Zarate also cited the “social ills” that came with the influx of the Chinese Pogo workers, like gambling and prostitution.

Bayan Muna opposed a proposal by ACT-CIS Rep. Eric Yap to allow the resumption of Pogos during the lockdown to generate revenues of about P500 million, which could be used for responding to the health crisis.

But the supposed revenue will be worthless, according to Zarate, if more Filipinos get afflicted with COVID-19 because many of these online gambling outfits allegedly do not comply with the country’s regulations.

“Truth to tell, these Pogos are not only skirting their own national laws … [against gambling]; worse, these violators are also gaming our laws by, among others, not paying the proper taxes supposedly due to the government,” he said.

Zarate cited findings in a House hearing in November, which showed that Pagcor had issued 62 Pogo licenses, but only 49 were reportedly operational. Of the 49, only 10 were paying the taxes and regulatory fees, according to the Bureau of Internal Revenue, he said.

Pagcor has reported that registered Pogo companies were helping in efforts to curb the spread of COVID-19, citing their donations of personal protective equipment to front-line health workers.

This was in addition to 47,000 food packs they had donated to impoverished communities in Benguet, Bulacan, Pampanga, Tarlac and Metro Manila.

Read Next
Military honors former Army soldier slain by cop
EDITORS' PICK
Tired of your Wi-Fi signal problems at home? Here’s a solution!
Must-know scams to avoid when buying cars
Average new COVID-19 cases daily in NCR down 30%
POVA x Mobile Legends Bang Bang: A partnership that’s built to win
Patients evacuated as fire hits PGH
Concepcion: Consider vaccine passes once herd immunity reached in NCR Plus
MOST READ
Patients evacuated as fire hits PGH
Mikey Garcia ‘not getting hopes up’ as Pacquiao fight yet finalized
Go pushes bill seeking creation of Center for Disease Control and Prevention
Dave Bautista on his Filipino grandfather, living with regret and being around superheroes and zombies
Don't miss out on the latest news and information.