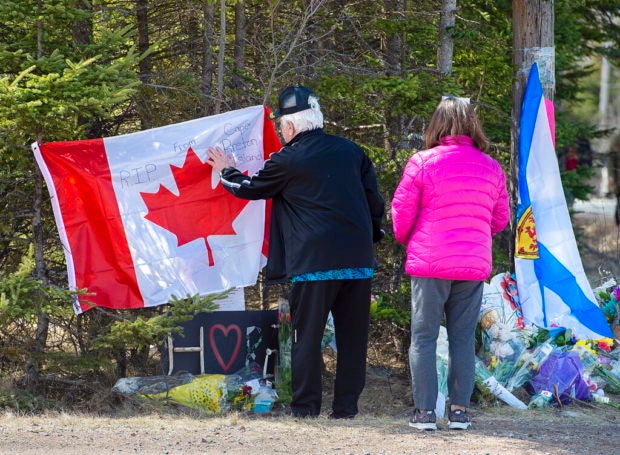 TORONTO — Canada’s worst mass shooting erupted from an argument between the gunman and his girlfriend, who survived the attack, police confirmed Friday.

Royal Canadian Mounted Police Supt. Darren Campbell said the weekend shooting rampage started with an assault by the suspect on his girlfriend and ended with 22 people dead in communities across central and northern Nova Scotia.

“She did manage to escape. That could well have been the catalyst of events,” Campbell said.

Authorities are also not discounting the suspect planned some of the murders.

Campbell said the girlfriend hid overnight in the woods from the suspect, who has been identified as 51-year-old Gabriel Wortman.

Police have said Wortman acted alone in the shooting spree that killed 22 people in more than 16 crime scenes in several rural communities. Campbell said they found 13 deceased victims in the rural community of Portapique, a quiet community of 100 residents where the suspect lived part time. He said when police arrived, they discovered a man shot. The man reported he was driving when someone in what looked like a police car shot him. He survived and was transported to hospital.

They were several homes on fire, including the suspect’s, when police arrived in the community. Campbell said the suspect had a pistol that was acquired in Canada and several long barreled guns that were obtained in the United States. Police found “several people who were deceased, some of which were lying in the roadway.”

Authorities initially thought the suspect might have committed suicide and was in one of the homes that was on fire, he said. Campbell said at about 6:30 a.m., Wortman’s girlfriend emerged from hiding in the woods, called 911 and gave police detailed information about the suspect including that he was driving a mock police car and was in police uniform.

Police later started receiving 911 calls more than 35 miles away. Campbell said the suspect killed two men and a woman and set their house on fire. He knew at least two of them.

He then approached another residence in that area where he knew people, and knocked on the door. But the people inside did not answer and he left. The occupants called 911 and confirmed the suspect was armed and was driving what looked like a police car.
He then shot a woman on the street and pulled cars over and shot and killed people, Campbell said.

He later shot and injured a male police officer in his car. The officer managed to escape and survived. Campbell then said there was a collision between a female officer’s police car and the gunman’s mock police car. He shot and killed the officer and took her gun and set fires to the cars. Campbell said he also killed a passerby and took their SUV.

He then drove to a house and killed a woman he knew before removing his police uniform and stealing her car. He then drove to get gas and was shot by a police officer who happened to be at the gas station refueling.

The suspect was shot to death at 11:26 on Sunday morning, about 13 hours after the attacks began.

“There seems to be a trail of individuals who had problems with Mr. Wortman,” Campbell said.

Police have said Wortman carried out much of the attack disguised as a police officer in a vehicle marked to seem like a patrol car. Campbell said he had a few cars that police believe were former police vehicles.

Campbell said the suspect’s girlfriend is recovering and continues to cooperate with police. He said it would have been a lot worse had she not told them he was driving a car made to look like a police vehicle.

John Hudson, who had known Wortman for about 18 years, said Wortman was sometimes openly controlling and jealous of his long-time girlfriend.

“I didn’t see him hitting her or anything like that,” Hudson said . “But I know they fought.”

Hudson recalled a bonfire party about 10 years ago when an argument between the two left the woman locked out of their home in rural Portapique.

“I was with her, trying to get her stuff out of there,” Hudson said. “People had been drinking … and it was a crazy night … and he didn’t want her to leave, but he wouldn’t let her in the house.”

Hudson said at one point, Wortman removed the tires from the woman’s vehicle and threw them into the ditch to prevent her from leaving. “So, I went to get (her clothes) and what he said to me was: ‘I don’t want anyone in my house. If you come in my house, I’m just telling you, I’ve got guns in here.'”

Hudson said his neighbor had been purchasing used police vehicles at auctions.

Wortman, who owned a denture practice in the city of Dartmouth, near Halifax, lived part time in Portapique, according to residents. His Atlantic Denture Clinic had been closed the past month because of the coronavirus pandemic.

The RCMP in Nova Scotia, meanwhile, said on Twitter later Friday that they were responding to unconfirmed reports of shots fired in the community of Hammonds Plains, outside Halifax.

Mass shootings are relatively rare in Canada. The country overhauled its gun control laws after Marc Lepine shot 14 women and himself to death at Montreal’s Ecole Polytechnique college in 1989. Before the weekend rampage, that had been Canada’s worst mass shooting.

Two years ago Thursday, a man drove a van along a busy Toronto sidewalk and killed 10 people and injured 16. The suspect, who is awaiting trial, said he carried out the attack in retribution for years of sexual rejection and ridicule by women.