MONROVIA, Liberia — Many Liberians remember Jerry Brown, the doctor leading the country’s coronavirus response team, for his fearlessness during the Ebola crisis in the West African state.

When the virus was poorly understood, and an infection tantamount to a death sentence, Brown risked his own life providing primary care for suffering patients.

“I must admit, the Ebola crisis was difficult,” said the doctor, who was named one of Time magazine’s people of the year in 2014 for his Ebola work. 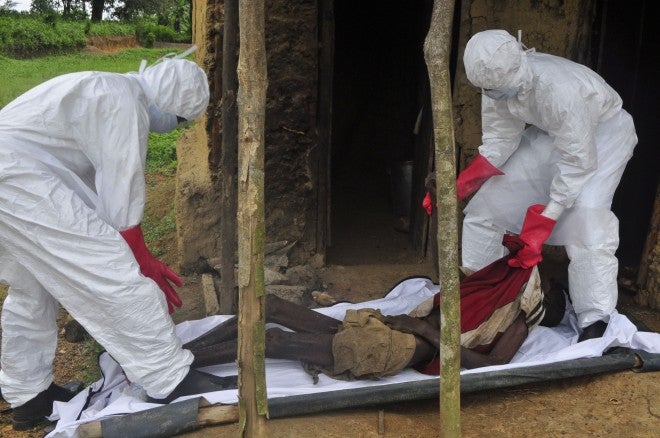 In this Oct. 31, 2014 photo, health workers carry the body of an old man from his house, with the Ebola virus being the suspected cause of death, in Monrovia, Liberia. AP

The disease killed over 4,800 people between 2014 and 2016 in Liberia, the hardest-hit country in the West African outbreak.

Just four years later, the country of some 4.8 million people is now staring down the barrel of a coronavirus outbreak.

From his base in a military hospital 20 kilometers (12 miles) from the capital Monrovia, Brown said Liberia had to draw on its Ebola experience.

“No individual effort can contain this virus,” he said, explaining that several sections of society had to pull in the same direction to defeat Ebola.

“I am sure we can do the same thing with corona,” Brown added.

Liberian doctors interviewed by AFP echoed the sentiment, saying they were optimistic that they had a head start on fighting the virus.

There are still fears the country is woefully under-equipped for a large outbreak, however.

Already decimated by back-to-back civil wars from 1989 to 2003, Liberia’s economy is also still reeling from the impact of Ebola.

About half of the country also lives on less than $1.9 (1.75 euros) a day, according to the World Bank, and the healthcare system is underfunded and fragile.

The authorities are acutely aware of the risk. After an initial slow start, the number of recorded cases has increased quickly. There are now 101 official coronavirus cases in Liberia, with eight fatalities.

President George Weah declared a state of emergency and locked down Monrovia this month after warning of the gravest threat to the country since Ebola.

The former AC Milan striker pointed to tragedies unfolding in countries such as Italy and Spain.

“The horrific scenarios that are beginning to emerge should serve as sufficient warning for every one of us to spring into action,” he said.

Liberia’s fight against Ebola boosted its initial response to coronavirus, according to the country’s chief medical officer, Francis Karteh.

Authorities quickly reopened five Ebola-era intensive care units spread across the country after detecting the first case in March, he said, adding that epidemic protocols were already in place.

“We already had our contact tracing teams set, the community teams were still intact, and we only needed to reactivate them,” Karteh said.

Heounohu Hessou, a student doctor during the Ebola crisis who is now on the frontline, also said complicated logistics had already been worked out.

“As far as clinical care (goes), we have the existing knowledge,” he said.

But doctors are not blindly optimistic. Brown, for example, noted that change to Liberia’s creaky health system had been “insignificant” after Ebola.

“I foresee some of the same challenges that we had during the Ebola,” he said.

The health system was quickly overwhelmed during the last crisis, and violence erupted around the country as people clashed with security and health officials.

The chief medical officer said the country has only one ventilator, however, media reports have cited five or six.

One of the hardest impediments to stamping out the virus will be convincing people to obey health restrictions, doctors say.

The government has locked down Monrovia, and banned large gatherings nationwide, as well as flights to and from virus-stricken countries.

But police have had to disperse huge crowds of worshippers over the past few weeks, underscoring the difficulty of enforcing the measures.

On Monrovia’s first day of lockdown, April 11, confusion also reigned as people thronged the streets in some districts despite stay-at-home orders.

As in other poor countries in the region, overcrowding in cities makes it hard to uphold social-distancing rules.

“Despite the bitter experience from the Ebola, some people are still defiant when it comes to implementing advice,” he said.

Coronavirus cases remain relatively low for now, but they are rising. In neighboring Guinea — which was also hit by Ebola, and suffers many of the same problems — infections have skyrocketed.

Some doctors fear the death toll in Liberia may be understated.

“Many of the patients with severe conditions have been dying in the communities, they die before getting here,” said Brown, adding that some are unaware the virus exists.

“If people don’t change their behavior, you can cure as many persons as possible in the hospital, people will still be coming,” he said.