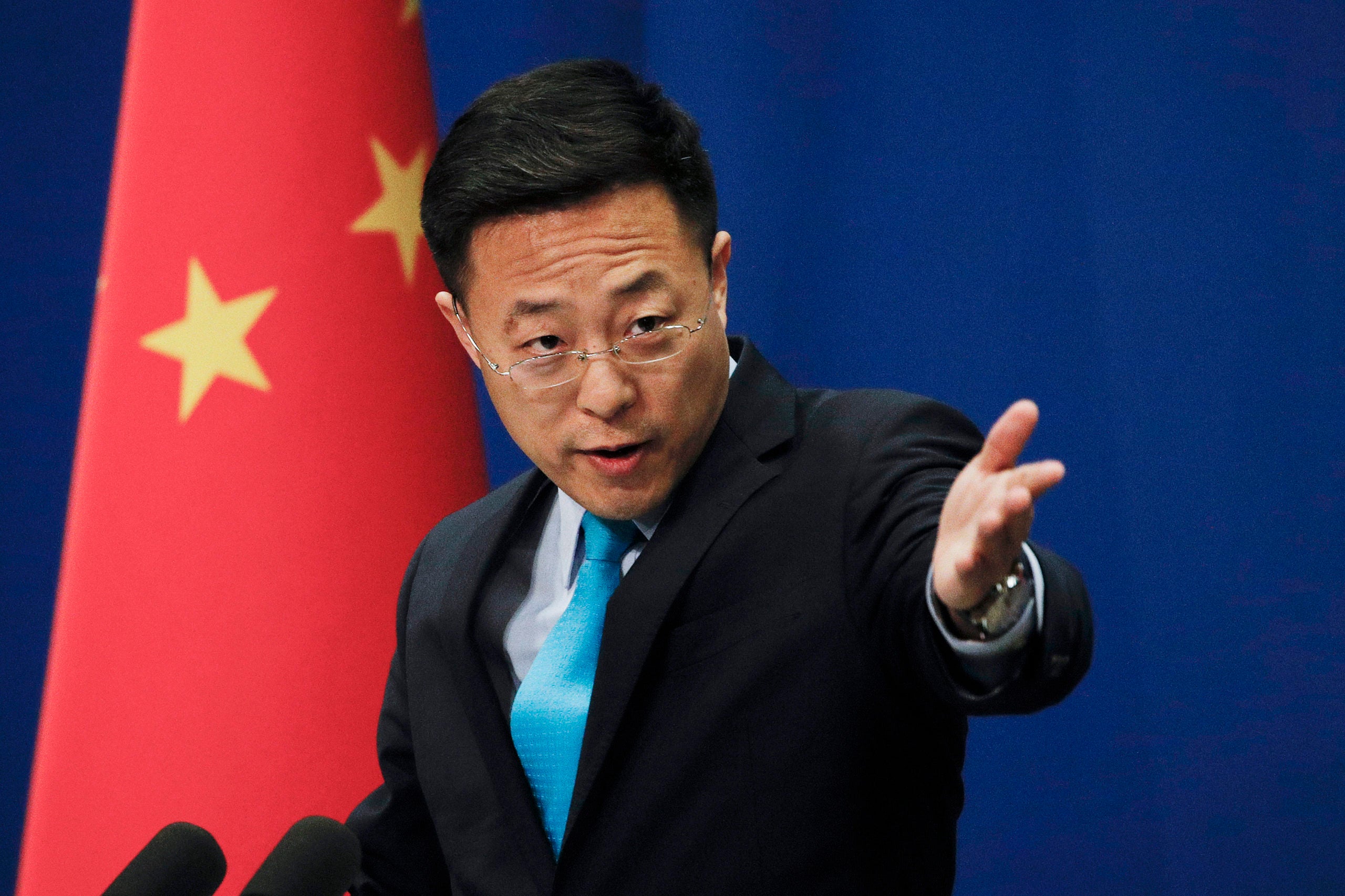 FILE – In this file photo taken Monday, Feb. 24, 2020, Chinese Foreign Ministry new spokesman Zhao Lijian gestures as he speaks during a daily briefing at the Ministry of Foreign Affairs office in Beijing. From Asia to Africa, London to Berlin, Chinese envoys have set off diplomatic firestorms with a combative defense whenever their country is accused of not acting quickly enough to stem the spread of the coronavirus pandemic. (AP Photo/Andy Wong, File)

BEIJING — From Asia to Africa, London to Berlin, Chinese envoys have set off diplomatic firestorms with a combative defense whenever their country is accused of not acting quickly enough to stem the spread of the coronavirus pandemic.

They belong to a new generation of “Wolf Warrior” diplomats, named after patriotic blockbuster films starring a muscle-bound Chinese commando killing American bad guys in Africa and Southeast Asia with his bare hands.

The tougher approach has been building for several years under President Xi Jinping, who has effectively jettisoned former leader Deng Xiaoping’s approach of hiding China’s ambitions and biding its time. His government has urged its diplomats to pursue “major-country diplomacy with Chinese characteristics” — a call for China to reassert its historic status as a global power.

“The days when China can be put in a submissive position are long gone,” said an editorial in the Global Times, a state-run newspaper known for its outspoken views. The Chinese people, it said, “are no longer satisfied with a flaccid diplomatic tone.”

Ambassador Gui Congyou has belittled journalists in Sweden, comparing them to a lightweight boxer seeking to go toe-to-toe with a heavyweight China. A commentary on the embassy website last month assailed a Swedish reporter for an article on the impact of China’s one-party political system on its virus response.

“Using this epidemic for political purposes, waging ideological attacks and spreading lies in the name of ‘freedom of speech’ will only lead to self-sabotage. It’s like lifting a rock and dropping it on your own toes,” it said.

Experts say Beijing sees critics as assailing not just its actions, but also its leadership and right to rule.

“If anyone tries to attack China on this issue, China will resolutely fight back,” said Shi Yinhong, professor of International Studies at Renmin University. “Chinese leaders may think if China doesn’t fight back, it will hurt China even more.”

Chinese diplomats are increasingly taking to Twitter and Facebook — platforms that are blocked in their own country. They’re following in the footsteps of Zhao Lijian, a pioneering firebrand whose tweets while stationed in Pakistan attracted a huge following and also led America’s former U.N. Ambassador Susan Rice to call him a “racist disgrace” who should be dismissed.

Instead, China promoted him — to foreign ministry spokesman.

These new-style diplomats are “reading the tea leaves, and are using bombastic language overseas as a tool to garner attention from nationalistic audiences at home — both among the party elite and among society at large — regardless of the impact on China’s image abroad,” Minzner said.

Overseas, the newly strident tone has been less appreciated. The French foreign minister summoned the Chinese ambassador after an embassy statement, in apparent response to Western criticism, accused French nursing home workers of deserting and “letting their residents die from starvation and disease.”

The U.S. protested after Zhao tweeted unsubstantiated speculation that the American military may have brought the virus to China.

China’s envoys in Nigeria, Ghana, and Uganda have been berated over reports of virus-related harassment of Africans in the city of Guangzhou, a rare public rebuke of Beijing by African nations. The Chinese Embassy in Zimbabwe waved away the anger, tweeting dismissively about “so-called racial discrimination.”

Chinese officials fume at what they see as Western hypocrisy. They say President Donald Trump and other leaders ignored the brewing pandemic, then began scapegoating China once the virus arrived on their shores.

French President Emmanuel Macron has questioned China’s virus response, telling the Financial Times that “there are clearly things that have happened that we don’t know about.” Britain’s top diplomat said it couldn’t go back to “business as usual” with China.

China’s Embassy in Berlin posted an open letter to Bild that accused the mass-circulation tabloid of “bad taste” for blaming the pandemic on China and calculating how much it owes Germany in damages for failing to contain it. The embassy in Spain tweeted “Freedom of expression has limits,” in response to a far-right politician who posted a video about “Spanish antibodies fighting the damned Chinese viruses.”

Under Xi, Beijing has launched coordinated efforts to shape China’s image abroad. Lifting a page from Russia’s playbook, it has mobilized thousands of bots to tweet the Communist Party line, according to Twitter. China has pumped funds into state media outlets broadcasting in Swahili, Arabic, Spanish, and dozens of other languages.

“In the past, China’s diplomacy was far away from the people,” said Chu Yin, a professor at China’s University of International Relations. Now, Chinese diplomats feel “it’s safe for them to show they are tough. Being tough won’t be wrong, at least.”

In Thailand, the embassy on Facebook called critics “disrespectful” and accused them of “betraying history” in a social media battle over the origin of the virus and the status of Hong Kong and Taiwan. In Sri Lanka, the mission erupted in fury this month after Twitter suspended its account, demanding “free speech” and accusing the tech giant of “double standards.”

Beijing’s diplomats see the virus as a chance to assert leadership among countries critical of the West. Many leaders have praised China for sending medical equipment and teams, with one flight greeted by the president of Serbia kissing the Chinese flag.

In the 1990s, some in China dismissed their diplomats as the “Ministry of Traitors,” annoyed at perceived deference to Western powers. No more.

“We’ve approached the center of the world stage like never before, but we still don’t have full grasp of the microphone in our hands,” said Hua Chunying, the foreign ministry’s chief spokeswoman. “We must assert our right to speak.”