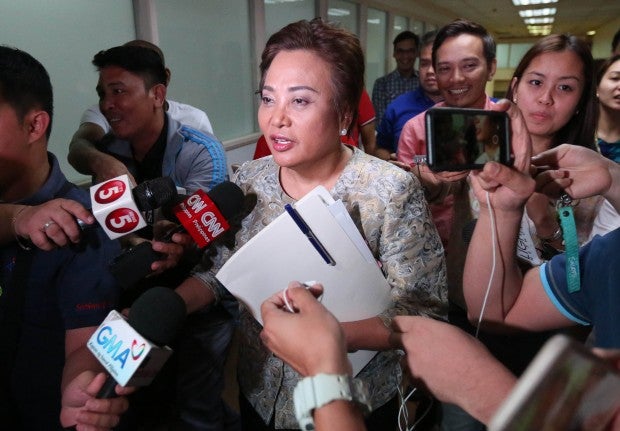 MANILA, Philippines – Law students who believe that a Quezon City police’s shooting of a former soldier was an act of self-defense are fools and would not pass the Bar exams, a Commission on Elections (Comelec) official said.

Women rights lawyer and Comelec Commissioner Rowena Guanzon said this as several people in social media — including aspiring lawyers — have voiced their opinion on the incident in Pasong Putik, Quezon City where a police officer gunned down an ex-Army officer for supposedly trying to draw a gun.

Several netizens explained that Police Mst. Sgt. Daniel Florendo only shot former Army Cpl. Winston Ragos on grounds that the former was in danger — even if the police officer fired two shots.

“Who are those law students saying it was self defense? Mga #Shunga u will not pass the Bar #BawalAngShunga,” Guanzon said in a tweet.

Who are those law students saying it was self defnse ? Mga #Shunga u will not pass the Bar #BawalAngShunga

Guanzon eventually explained that Ragos’ act of allegedly drawing a gun cannot be accounted as “unlawful aggression” because he neither pointed the gun towards Florendo nor did he open fire.  She even said that the first shot itself could already be considered murder as no gun was pointed against Florendo.

“The video will be the best evidence. The deceased did not have a gun and did not point a gun at the policeman.  That pulis should have been arrested or in custody immediately after he killed (Ragos),” Guazon said.

The video will be the best evidence. The deceased did not have a gun and did not point a gun at the policeman . That pulis should have been arrested or in custody immediately after he killed Rayos. In a fair fight wala syang laban kay Rayos. https://t.co/ytu30jOv1o

On Tuesday, Ragos was accosted near a quarantine control point in Quezon City, which was set up to monitor movements of residents in view of the lockdown due to COVID-19 pandemic.  However, a shouting match ensued, which eventually led to Florendo firing at the former Army officer.

Onlookers told police officers before shooting Ragos that he was suffering from a mental disorder, later revealed to be post traumatic stress disorder (PTSD) as a result of his service in the military.

Ragos’ family and other people in the crime scene disputed that he carried any firearm with him, but police said they recovered a .38-caliber firearm from the slain suspect.

Earlier, Quezon City Police District (QCPD) investigation unit chief Maj. Elmer Monsalve said that the presence of the firearm was verified by police trainees who were with Florendo.

Various sectors have called for a thorough investigation of the incident.  Guanzon, for her part, asked Philippine National Police chief Gen. Archie Gamboa to ensure that there would not be a whitewash in the probe of the incident.

Public opinion is against a white wash Chief @PNPChiefGamboa ,so please investigate this objectively at huwag kayong pumanig kay Florendo. Let truth and justice prevail. The credibility of the PNP is at stake , it is more important that Sgt florendo @pnppio