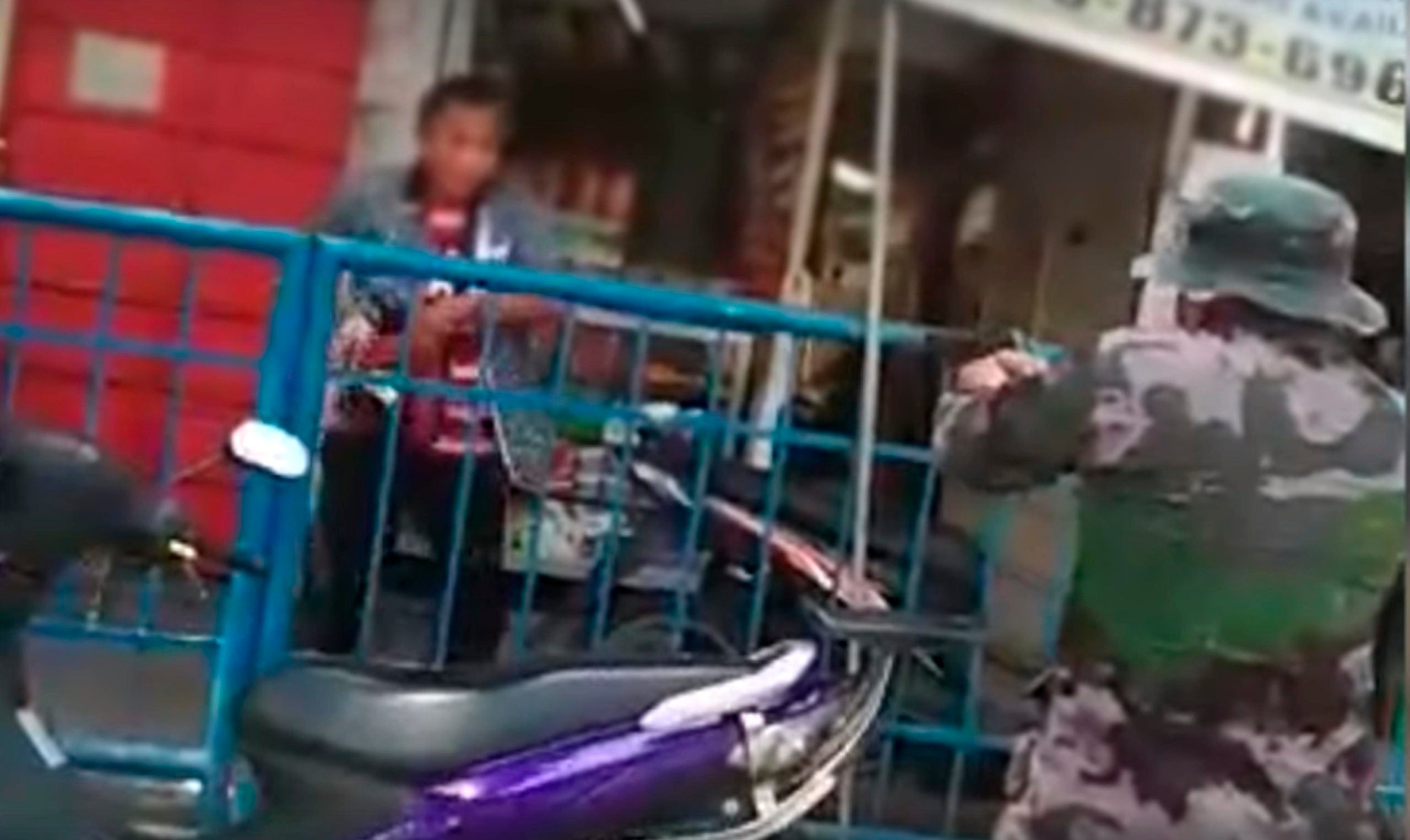 WAS IT A GUN? A video grab shows ex-Army Cpl. Winston Ragos appearing to take something out of his bag moments before he was mortally wounded by Police Master Sergeant Daniel Florendo Jr. who shot himnear a quarantine checkpoint in Fairview, Quezon City, on Tuesday. Police said it was a gun but Ragos’ family said he didn’t own one. —QCPD VIDEO

A human-rights group and relatives of a former soldier who was gunned down near a quarantine checkpoint on Thursday condemned the killing and demanded justice as police officials promised to investigate whether the officer who shot him made the right “judgment call.”

Closed-circuit television footage and cell phone camera videos showed Florendo, his gun drawn and pointed at Ragos, and four unarmed officers rushing toward the former soldier who was on a sidewalk that was separated from the road by steel railing.

Florendo ordered Ragos to drop on the ground, but the former soldier refused.

Ragos was seen turning his back at the officers with his hands raised. He later turned toward Florendo asking the officer what the problem was. Moments later, Florendo fired twice at Ragos who appeared to be pulling something out of his bag. Mortally wounded, Ragos managed to throw the bag away toward the police.

A video later showed one of the officers tossing the bag into the back of a barangay vehicle which took Ragos to the hospital.

In an interview on Thursday on ABS-CBN News Channel, Philippine National Police chief Gen. Archie Gamboa said the National Capital Region Police Office claimed the officers at the checkpoint “had knowledge that the person (Ragos) was armed.”

“It was really a decision that was given to the policeman and that was his (Florendo’s) decision. Now whether the decision was right or wrong, the investigation should find out,” he said.

“We’re going to look at that judgment call whether it was right at that time with the different circumstances surrounding it,” Gamboa said.

‘He served his country’

A brother of Ragos, Leopoldo, insisted that he did not own a gun.

“They should have just put him in handcuffs. How many were they? He was just one and they could not subdue him,” he said.“I hope my brother gets justice. He served his country, the government, and this is how his life ends,” Leopoldo told Inquirer.net.

Ragos’ sister, Janet Macahilig, was seething with anger over how her brother was “mercilessly killed” despite suffering from “war shock.”

“He didn’t do anything wrong. Why the need to shoot him like that? Witnesses even asked them not to shoot because he was not mentally stable,” Macahilig said. “The [officers] are animals, they’re heartless! They have to pay for what they’ve done.”

Ragos’ niece, Fae Macahilig, said her uncle was in front of a store when he saw police trainee Joy Flaviano, who was then about to enter a comfort room.

“He saw that my uncle followed him, who was naturally playful because of his traumatic disorder. Sir Flaviano did not proceed to the CR, then moments later, Sir Florendo came and pointed a gun at my uncle,” Fae said.

Appeal to officersSeveral videos of the incident taken by Ragos’ relatives were uploaded on social media, where people could be heard appealing to the officers to let Ragos go because he was suffering from war shock. None of the videos showed Ragos taking out a weapon from his bag.

Police Lt. Gen. Guillermo Eleazar, chief of the Joint Task Force COVID-19 Shield, said Ragos had earlier “bullied” the unarmed police trainees who reported him to Florendo, leading to the confrontation that ended in the shooting.

Responding to criticisms of the action by the officers, Eleazar said it was so easy for people to criticize the police for shooting a man who could have shot the officers instead.

“But put yourself in our shoes. We also have families,” Eleazar said in an interview on ANC. “If there was a mistake, just face whatever case against you rather than end up dead in that situation …. That’s your call.”

In a statement on Wednesday, the Quezon City Police District (QCPD) said it “later learned” that Ragos had in his bag a .38-caliber Smith and Wesson revolver without a serial number and loaded with ammunition.

On Thursday, Police Maj. Elmer Monsalve, chief investigator of the QCPD, insisted that the policemen recovered a gun inside Ragos’ sling bag and had sent it to the crime laboratory.He said it was only “normal” for Ragos’ family to deny that he carried or had owned a gun.

The former soldier’s family said his bag only contained a water bottle, medicines, quarantine passes, pictures of his wife and daughter, and a wallet containing only ATM cards.

“My uncle did not have a gun, but they didn’t listen. A police officer even said then: “‘I will kill him … we do not care,’” said Fae, who saw the shooting. “My uncle then turned around to show them that he did not carry a gun. He even raised his arms so the police won’t shoot him.”

Fae said the officers even instructed some of the witnesses to stop taking videos and told others to delete their footage of the incident.

She also said barangay officials who were present knew about her uncle’s condition but did nothing to stop the police.

“We were all screaming, but you just watched while my uncle was being shot. I hope your conscience will bother you with what you did to my uncle who was helpless,” she said, addressing the barangay officials.

Residents of Barangay Pasong Putik on Wednesday put up banners calling for justice for Ragos and lighted candles at the spot where he fell on the sidewalk.

Human rights group Karapatan called the shooting of Ragos “an alarming and deplorable act of state violence that should be strongly condemned.”

“His killing only goes to show that the President’s ‘shoot them dead’ orders and threats of a martial law-like takeover are not mere exaggerations—we have heard this order in the bloody drug war before,” Karapatan said.

“This is all preliminary. So it has no relation to whatever the President said,” Roque said at a press briefing. “The policeman did not say he was implementing the order of the President. So let us not give any interpretation to something as baseless. If at all, it is speculation, it is conjecture, it is not factual.”

He said the President promised a “fair and speedy investigation.”Ragos was raised one rank higher to corporal after his complete disability discharge in November 2017 due to PTSD.

Ragos’ family said he was to have himself confined at Veterans Memorial Medical Center (VMMC) in Quezon City to treat his PTSD, but the hospital did not accept him because it had a confirmed COVID-19 case.

Army spokesperson Col. Ramon Zagala clarified that Ragos had not been assigned to Marawi, according to initial reports but was engaged in counterinsurgency operations against communist rebels.

He said Lt. Gen. Gilbert Gapay, the Army commander, directed a separate investigation “in order that justice be given to the death of Ragos.” —WITH REPORTS FROM JEANNETTE I. ANDRADE, JULIE M. AURELIO AND FRANCES MANGOSING