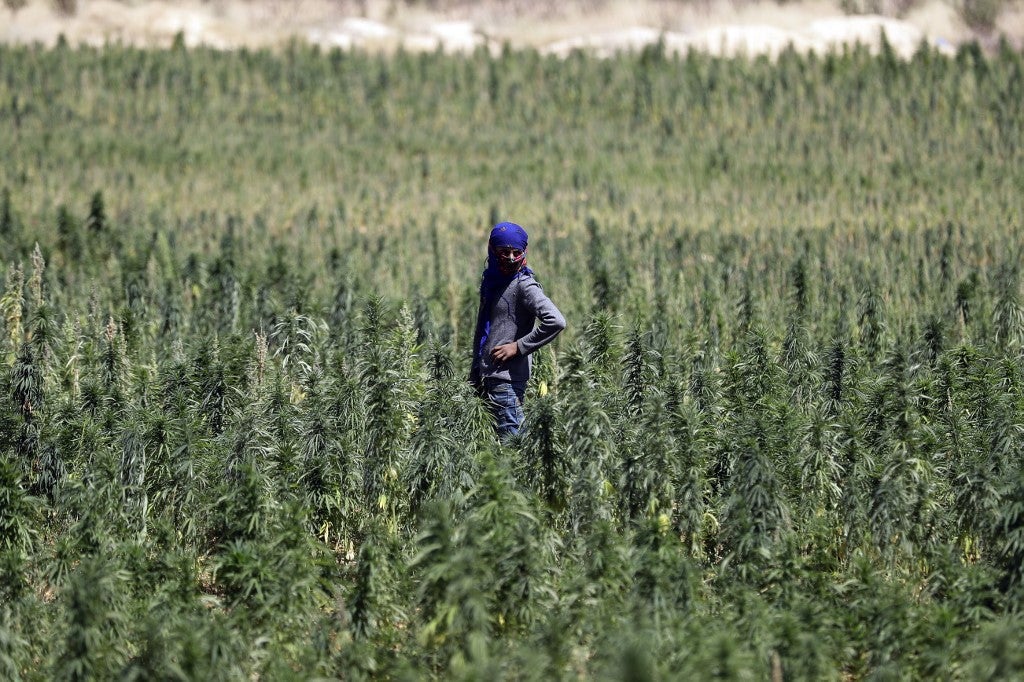 A worker stands amid a cannabis plantation in the village of Yammouneh in Lebanon’s eastern Bekaa Valley on July 23, 2018. (Photo by JOSEPH EID / AFP)

Lebanon’s parliament voted to legalize growing marijuana for medical use on Tuesday, amid an economic crisis exacerbated by the coronavirus pandemic.

The lawmakers met in a 1,000 seat conference hall to maintain appropriate social distancing, while outside anti-government protesters demonstrated in a vehicle convoy.

As the country struggles with a battered economy, MPs also approved the re-allocation of $40 million from a World Bank loan to help fight COVID-19, which has officially infected 677 people and killed 21 nationwide.

Outside the venue, dozens of demonstrators sought to revive a massive anti-government protest movement that had rocked Lebanon from October, before the virus forced a nationwide shutdown.

They drove a noisy convoy of cars covered in slogans, drivers honking their horns and passengers brandishing the national flag and leaning out of the windows — while wearing face masks.

Another item on the agenda of the three-day session were proposals for a divisive general amnesty, but that motion was sent back for revision by a parliamentary committee.

“Today, instead of passing a general amnesty law… they could pass a law on the independence of the judiciary,” said Jad Assaileh, a young demonstrator.

“We want to recover the stolen money,” he said, referring to allegations that Lebanon’s ruling elite transferred billions out of the country while regular citizens were prevented from withdrawing their savings by the banks.

Similar protests took place in the cities of Sidon and Tripoli.

The vote to legalize the growing of cannabis for medical use was aimed at boosting revenues for the crippled economy.

Lebanon previously banned growing, selling and consuming cannabis, but illicit production in the country’s east has developed over decades into a multi-million-dollar industry.

Lawmakers also passed a law to fight corruption in the public sector and set up a national body in charge of stamping out graft.

The proposal for a general amnesty to free thousands of detainees and to suspend arrest warrants for thousands more remains a contentious issue.

Supporters — which include Shiite movements Hezbollah and Amal as well as the Sunni Future Movement — say an amnesty could lessen overcrowding in jails housing 9,000 prisoners.

But its detractors, including the president’s Christian parliamentary bloc, say the bill is merely an attempt to boost popular support.

The amnesty has long been a demand of the families of some 1,200 so-called “Islamist detainees”, most of whom hail from the Sunni-majority city of Tripoli, where the former premier’s Future Movement is dominant.

They are accused of carrying out crimes including fighting and assaulting the army, taking part in clashes in the city, and planning explosives attacks.

Families have also clamored for the release of thousands of more detainees from the eastern regions of Baalbek and Hermel, where Hezbollah and the parliament speaker’s Amal Movement are powerful.

Most of these are accused of drug-linked crimes including growing hashish illegally or other offenses such as stealing cars.

Lebanon’s worst economic crisis since the 1975-1990 civil war is now compounded by the lockdown. Poverty has risen to 45 percent of the population, according to official estimates.

Protests had petered out after a new government took office in January, and demonstrators have largely remained at home since the coronavirus lockdown started mid-March.

But on Friday, hundreds again protested in Tripoli to mark six months since the street movement started to demand an overhaul of a ruling class widely deemed inept and corrupt.

One of the most indebted countries in the world with a debt equivalent to 170 percent of its GDP, Lebanon defaulted on payments for the first time last month.

As the country faces an acute liquidity crisis, banks have banned transfers abroad and gradually restricted dollar withdrawals until suspending them last month.

The Lebanese pound has for decades been pegged to the dollar, but in recent months lost half of its official value on the black market.

The official exchange rate remains 1,507 Lebanese pounds to the dollar.

The banks earlier this month set their rate at 2,600 pounds to the dollar, but money changers were offering more than 3,200 pounds for the greenback on Tuesday on the black market.

On Tuesday, the central bank asked banks to allow depositors with foreign currency accounts to withdraw their savings in Lebanese pounds at the “market rate”, likely to signify 2,600 pounds to the dollar.