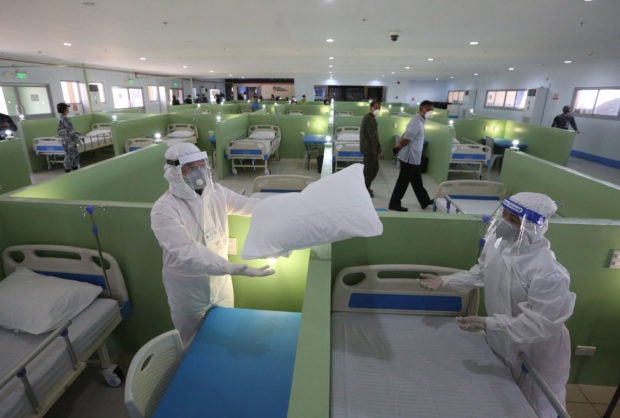 PIER QUARANTINE The government has been busy over the past weeks converting various venues into quarantines for the rising number of people who may be suspected, probable or confirmed coronavirus cases like the Eva Macapagal Super Terminal at Pier 15, which the Philippine Coast Guard has set up in this picture taken on Tuesday. (Photo by MARIANNE BERMUDEZ / Philippine Daily Inquirer)

MANILA, Philippines — The World Health Organization (WHO) expressed alarm on Tuesday over the “very worrisome” trend of an increasing number of Filipino health workers afflicted with the new coronavirus disease (COVID-19), which was at least four times more than the average in the Western Pacific region.

Dr. Abdi Mahamud, the WHO region’s COVID-19 incident manager, said the 766 health workers accounted for around 13 percent of all confirmed cases in the Philippines. It is higher than the 2- to 3-percent average in the 22-member region, which includes China, he added.

“The Philippines is a bit of an outlier. This is why we’re working very closely with the minister (secretary) of health to determine the reasons why the Philippines has a high percentage of infected health-care workers,” Mahamud said.

He told a briefing that the WHO still “[doesn’t] … have the exact data” to explain this high number of infections, but that it could be attributed partly to the shortage of personal protective equipment (PPE).

“[The] WHO is working closely with member states in providing PPE so that we can protect this crucial workforce,” he said.

The Department of Health (DOH) on Friday reported at least 339 doctors and 242 nurses had been infected by SARS-CoV-2, the virus that causes the severe respiratory disease. They represented 13 percent of the total 5,878 cases then.

The DOH said 22 health workers had died, or nearly 6 percent of the total 387 deaths recorded as of Friday, higher than the 4 percent in China where the virus originated.

Health Undersecretary Maria Rosario Vergeire said the testing of health workers started two weeks ago because “they belong to our vulnerable group.”

Among the infected health workers are the 62 employees of the National Center for Mental Health. Some of them are asymptomatic and on home quarantine.

The high rate of infection among health workers could overburden the country’s health system, according to the University of the Philippines (UP) COVID-19 Pandemic Response Team.

At the virus’ reproductive number of two — when a person can infect two others — the UP team estimates there may be 8,800 to 19,800 critical cases.

“This is 21 percent more than our present number of health care workers,” the UP team said.

In his weekly report on Monday, President Duterte said the DOH had requested an additional budget of P5.2 billion to hire 17,757 medical front-liners—2,000 physicians and 15,757 other health care workers like nurses and technicians—for government hospitals dedicated to COVID-19 cases.

Nograles said the government was also looking for additional staff for the Research Institute for Tropical Medicine (RITM) after 43 of its employees tested positive for SARS-CoV-2, seriously slowing down its work.

“The backlog will be resolved through the 17 subnational laboratories that are operating right now. We’re taking care of the health of these health care workers and nursing them to full health,” Nograles said.

She said the scaled-down operations would last until Friday to allow thorough testing of its workers and decontamination of facilities.

Some 5,000 specimens have yet to be processed, Carlos said. The RITM will get assistance from the Philippine Red Cross and the National Tuberculosis Reference Laboratory to handle the backlog, she said.

The laboratory has already swabbed 790 of its over 1,000 staff and was awaiting results.

“Our primary concern right now is employee welfare. The strength of the RITM family lies in each and every one of its members working together in perfect cohesion,” Carlos said.

“We have been at the front lines since January. It’s high time we look out for our own,” she added.

She said the first identified case was an encoder who was infected at his community.

The UP team report also pointed out the need to beef up critical care facilities because the current capacity could not absorb the estimated number of critical cases because the country had only a little more than 2,000 intensive care unit (ICU) beds.

The DOH said 28 percent of the reported 650 ICU beds are currently occupied. It noted that it takes an average of six weeks for a critical patient to recover.

The government was ramping up the designation and conversion of various venues into quarantine and isolation facilities for patients, “to address the expected surge in COVID-19-related cases,” the President reported.

There are now 693 facilities and hospitals, 8,714 beds and 1,697 mechanical ventilators dedicated for COVID-19 patients, he said.