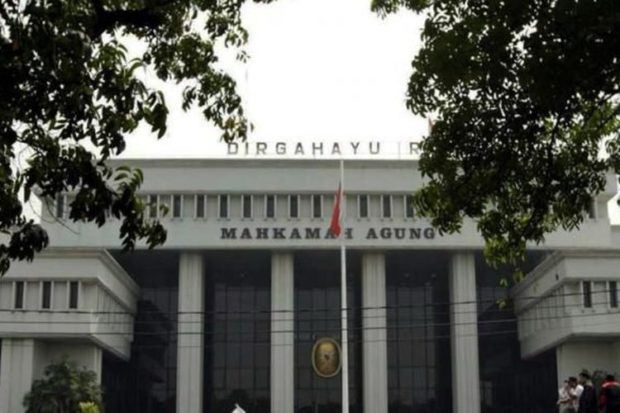 The red-and-white national flag flies at full mast at the Indonesian Supreme Court in this undated file photograph. (kompas.com/Dhoni Setiawan) via The Jakarta Post

JAKARTA — As the COVID-19 epidemic in Indonesia shows no signs of easing, two of the country’s highest courts, the Supreme Court (MA) and the Constitutional Court (MK), have switched to virtual trials to keep the judicial system running.

The Supreme Court has determined in an unprecedented decision that all lower courts are to use the Zoom videoconferencing platform to conduct their trials fully online starting April 13. The court issued a joint agreement with the Attorney General’s Office (AGO) and the Law and Human Rights Ministry late last month on conducting criminal trials by video conference.

On March 23, weeks before the switch comes into force, the court suspended most trials across the nation due to the COVID-19 epidemic. However, it still allowed the lower courts to conduct selected trials offline with restricted attendance at hearings and temperature scans for all attendees before they were permitted entry.

Under the new policy on virtual trials, the judges and prosecutors are to be physically present in the courtroom, while the defendants will be seated in a dedicated room at their detention facilities for a hearing. The prosecution will then use a video link to question the defendants.

“We need to carry on with the judicial process during the outbreak, so we have now decided not to postpone any trials and instead move them online,” Supreme Court spokesperson Abdullah said on Saturday.

According to Abdullah, all 382 lower courts in the country had started switching to online trials to days before the policy was issued. The courts had prevailed in holding virtual trials, despite a variety of technical glitches ranging from poor video and audio quality to unstable internet connections that interrupted the examination of witnesses and defendants.

Abdullah could not provide the exact number of virtual trials that had been held to date, but said that around 25,000 criminal cases had been tried online between March 23 and April 17.

He added that the Supreme Court would upgrade its technology and install proper equipment.

However, the court had no plans to livestream the trials for public view, Abdullah said, including trials that were usually open to the public.

The statement has fueled criticisms on the transparency of the court, which is notorious for opposing external oversight. In its defense, the court said it wanted to protect the identities of all justices, prosecutors and witnesses, regardless of the nature of the court case.

“At the criminal courts, we also handle drug-related crimes, terrorism and graft cases that often involve criminal organizations. If the defendants are members of such groups, their associates could harm witnesses, judges and prosecutors if their identities are disclosed,” Abdullah said.

Meanwhile, civil cases tried at state administrative, civil and religious courts that fall under the Supreme Court’s jurisdiction – including at the lower and appellate levels – had been moved to the e-litigation system on Jan. 1. In this system, the litigation documents are submitted electronically for the trial judges to examine.

Unlike the Supreme Court and all courts under its jurisdiction, the Constitutional Court has been using videoconferencing facilities for witnesses, forensic witnesses and petitioners to deliver statements and testimonies remotely, years before the pandemic emerged. It also livestreams all hearings on its website.

The Constitutional Court has suspended all hearings until April 21 to comply with the government’s COVID-19 mitigation efforts. Following the end of this suspension period, the court intends to apply a more inclusive videoconferencing method that would allow petitioners to present their cases remotely in judicial review hearings.

The court is now preparing a set of guidelines on conducting virtual trials for its nine justices.

“We have yet to decide whether the justices should adhere to the social distancing policy in the courtroom, or whether they may work from home but are obliged to wear their robes,” said Constitutional Court spokesman Fajar Laksono.

Julius Ibrani from the Indonesian Legal Aid and Human Rights Association (PBHI) said that all courts, in particular the Supreme Court, needed to maintain transparency since virtual trials tended to restrict public access to court proceedings. He said that the decision not to livestream the trials was an apparent attempt to restrict transparency.

Julius also urged the Supreme Court to standardize the videoconferencing technology at the lower courts to maintain the quality of the hearings to aid judges in issuing fair rulings.

He said that he had found that some online trials at lower courts focused the cameras on the defendants’ faces, which did not offer a birds’ eye view of the defendants’ surroundings at the detention centers. This made it difficult for judges and prosecutors to determine whether or not the defendants were being intimidated, manipulated or otherwise interfered with while giving their statements during a hearing.

“In such settings [at detention centers], we never know whether they are under pressure or not. False statements are likely to affect the rulings,” Julius said.

Meanwhile, the Indonesian Anticorruption Community (MAKI) has filed a petition with the Constitutional Court to challenge the controversial regulation that gave lawmakers impunity in taking extraordinary measures to protect the economy from the impacts of the COVID-19 pandemic.

MAKI coordinator Boyamin Saiman said that his experience in a 2013 challenge of a provision in the Criminal Code Procedures (KUHAP), during which a fellow petitioner presented their arguments via video link, had convinced him that the court’s rulings would be unaffected by holding virtual trials.

The Constitutional Court has so far received seven petitions over the temporary lockdown.