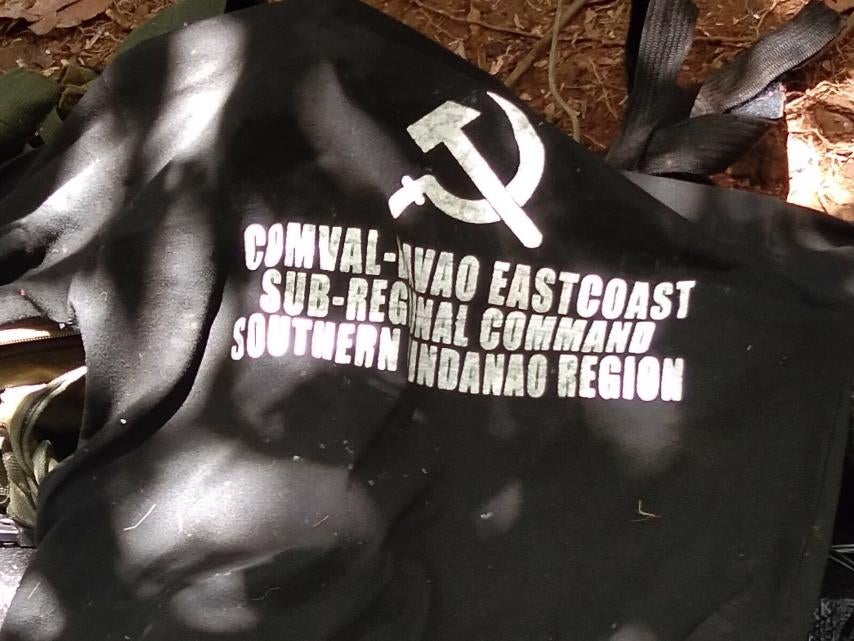 The bodies of alleged NPA rebels killed in a clash in Davao Oriental town have been turned over to local authorities for identification by their next of kin. CONTRIBUTED PHOTO (By Eastmincom)

DIGOS CITY, Philippines –The Eastern Mindanao Command (Eastmincom) has turned over to the local government of Baganga town in Davao Oriental, the bodies of two alleged members of the New People’s Army (NPA) who were killed in a clash with the military in Baganga town last week for identification by their relatives.

Lt. Col. Ezra Balagtey, spokesperson of Eastmincom, said the two rebels were killed in an encounter with troops of the 67th IB in Km 22, Sitio San Francisco of Campawan village in Baganga town on April 16.

“The troops retrieved (the body) from the encounter site, turned them over to the local government of Baganga to allow their families to claim and give them a decent burial,” Balagtey said in a statement.

The clash happened as Army soldiers were securing the distribution of aid to poor families who are affected by the lockdown enforced to contain the spread of the coronavirus disease (COVID-19).

Another clash also happened between troops of the 3rd Special Forces Battalion and another group of NPA fighters in Sitio Mikit, San Martin village of Prosperidad town, Agusan del Sur at 6:35 a.m. on Friday, April 17, the military reported.

The troops were in the area to secure social welfare and development personnel who were about to distribute relief to the communities when soldiers ran into the rebels, resulting in a 30-minute firefight, said Major Gen. Jose C. Faustino Jr., Eastmincom commander.

After the clash, the NPA escaped, leaving behind an AK-47 rifle, two M16 rifles, an M203 grenade launcher, one M653 rifle, 10 backpacks, five ammunition bandoleers and radio equipment, which the soldiers seized.

There was no casualty reported on the government side.

Read Next
DFA says 116 more Filipinos abroad have COVID-19
EDITORS' PICK
A gem of a residence in the new normal
Been there, done that but what’s the difference between MECQ and GCQ?
BREAKING: 3,226 latest COVID-19 cases bring PH’s total to 106,330
Water remains our saving grace right now
PNP: Checkpoints back in MECQ areas
Smart 5G goes live
MOST READ
MECQ guidelines in infographics
MECQ in NCR, other areas: Mass transportation suspended, quarantine pass required anew
Duterte heeds frontliners’ plea, reimposes MECQ in Metro Manila, other areas Aug. 4 -18
Doctors group to Duterte: ‘There was never a call for a revolt’
Don't miss out on the latest news and information.