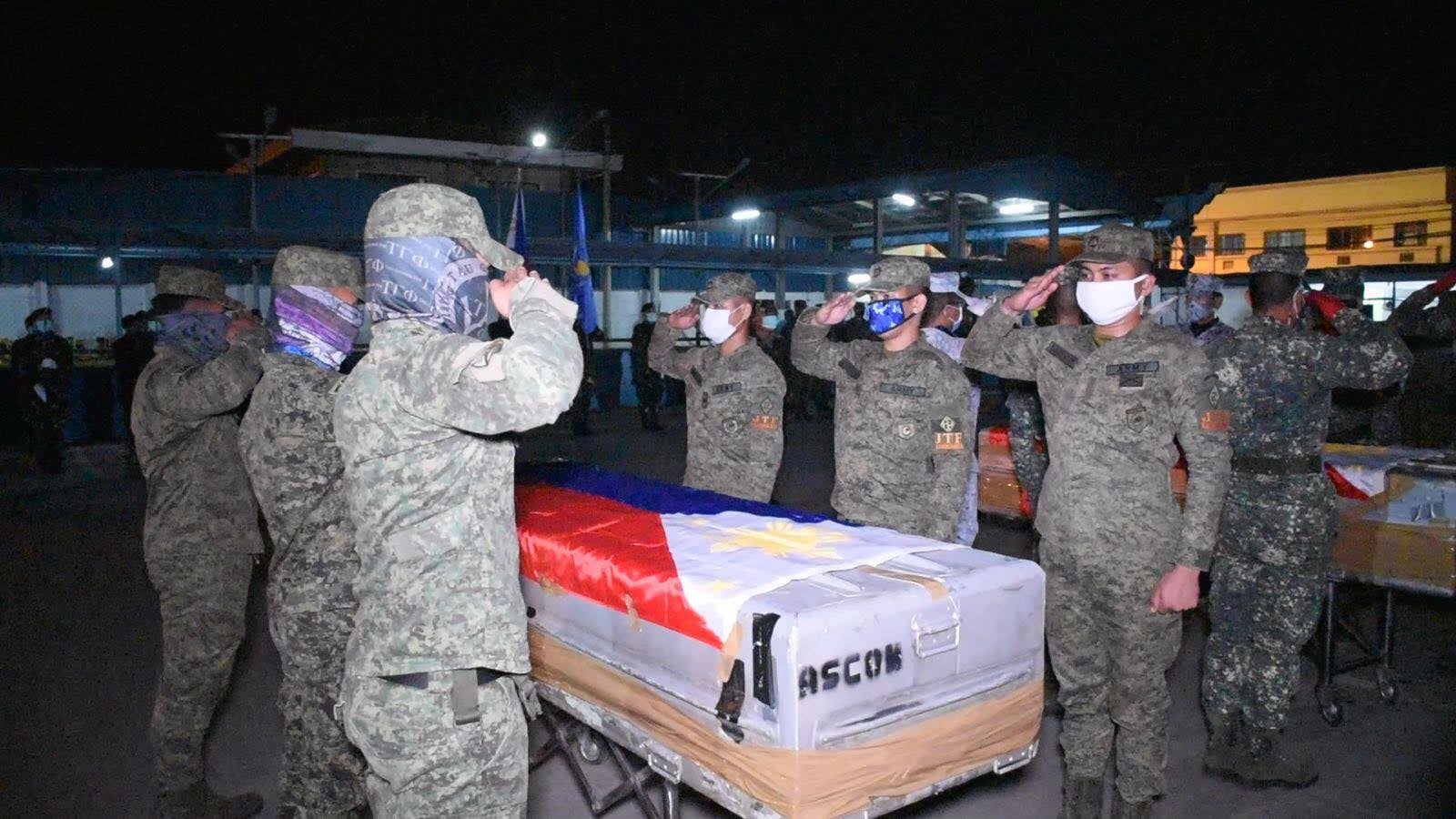 Bodies of eight of 11 soldiers killed in Patikul, Sulu on Friday afternoon, are loaded in a C295 aircraft, bound for Manila. A funeral honor is set for the 8 soldiers who were from Northern Luzon. The funeral send off was held inside Edwin Andrews Air Base in Zamboanga City. Photo by PIO WESTMINCOM

ZAMBOANGA CITY — With face masks on, honor guards of the Armed Forces of the Philippines’ Western Mindanao Command (Westmincom) saluted and then carried eight coffins bearing the remains of their colleagues who were slain during a fierce gunfight with Abu Sayyaf terrorists in Patikul, Sulu, on Friday.

The fallen soldiers who are from Northern Luzon were boarded on a C295 military aircraft for Manila where they would be accorded arrival honors.

The sendoff rites at the Edwin Andrews Air Base here Saturday evening capped a long day for Westmincom, arranging for the soldiers’ funeral and learning lessons from its recent setback in the campaign against the Islamic State-linked Abu Sayyaf.

The death of the 11 soldiers was the single largest casualty count since the military stepped up offensives against the Abu Sayyaf mid-2019 that aimed to decimate the group by end of that year.

Westmincom chief Lt. Gen. Cirilito Sobejana, who flew to Sulu on Saturday, told the Inquirer they are “making the necessary adjustments on our strategy.”

Sobejana said despite the setback, the troops in Sulu “are still well-motivated” to continue the campaign against the Abus.

“We reassessed the security situation and we saw that there is a need to readjust especially in as far as the concept of operation is concerned,” Sobejana added.

Sobejana has hailed the heroism of the fallen soldiers.

He said he has officers who will bring the fallen soldiers to their respective families.

Read Next
Norzagaray in Bulacan will be on total lockdown starting April 19
EDITORS' PICK
DOH: 28,471 new COVID-19 cases in PH; active cases now 284,458
On Day 2 of implementation, gov’t says workers now exempt from ‘no vax, no ride’ policy
Over 3 Million worth of prizes to be won at Smart Padala’s SENDali Manalo Promo!
Acer starts the year off strong with the Aspire Vero National Geographic Edition
Metro Manila posts lowest temperature yet this ‘amihan’ season at 19°C
Gear up and get ready to play with Yamaha Mio Gear
MOST READ
Lucky plants to grow in 2022
Derek Ramsay on being married to Ellen Adarna: ‘Gumaan ‘yung mundo ko’
Cristalle Belo on raising her kids in Australia: ‘We set limits’
Unvaccinated has rights but also has limits—DOJ
Don't miss out on the latest news and information.