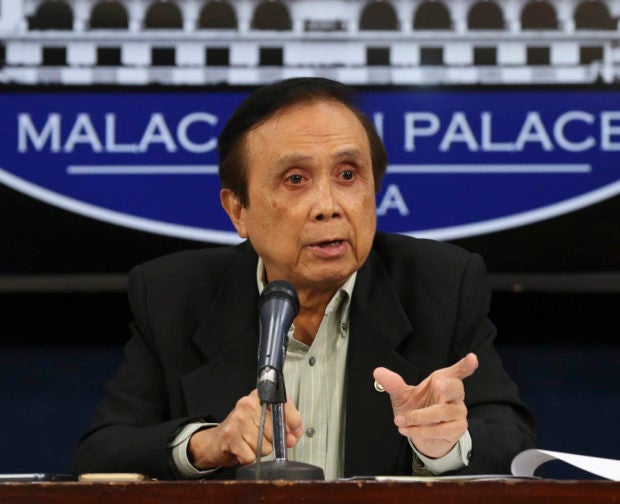 Former Socioeconomic Planning Secretary Ernesto Pernia butted heads with other economic managers as he argued vigorously for the gradual reopening of the economy under a “modified ECQ (enhanced community quarantine)” setup next month.

This led to Pernia’s surprising resignation on Friday, according to House leaders who were privy to the discussions among members of the Cabinet’s economic cluster last week.

The Inquirer learned that Pernia’s resignation was due to disagreements with other Cabinet members over how or whether the government should let certain businesses resume operations after the end of the Luzon lockdown on April 30.

Pernia stepped down while his agency was in the thick of preparations for a “new normal” once the country overcomes the coronavirus crisis.

“After reflection during Holy Week, and consultations with my family and close colleagues, I have decided to resign from my post as secretary of socioeconomic planning. This is due partly to personal reasons and partly to differences in development philosophy with a few of my fellow Cabinet members,” Pernia said in a statement where he thanked the President for appointing him to the position.

“It has been an honor and privilege to have served the country under his administration for the past nearly four years,” he said.

Pernia did not elaborate on what the differences were about, with whom and what had triggered his resignation at this time.

He was a member of the Cabinet’s economic development cluster, sometimes referred to as the government’s economic team, which is headed by Finance Secretary Carlos Dominguez III.

The team includes the secretaries of budget and management, trade and industry, public works, transportation, information and communication, science and technology, tourism, agriculture and local government.

According to Dominguez, Pernia did not consult him about his plan to resign.

When Dominguez was asked to comment on rumors in the business community that he was the reason Pernia had resigned, he replied: “I can’t imagine why.”

Pernia had argued for a gradual lifting of the lockdown on Luzon and other regions to allow certain types of businesses to reopen, one House leader said in a phone interview.

But President Duterte was more keen on stronger enforcement of the lockdown in hopes of seeing a substantial drop in COVID-19 cases, said the lawmaker, who spoke on the condition of anonymity because he was not authorized to speak for the Cabinet economic cluster.

“The President wants to focus on COVID-19 before talking about the economy,” he said.

Other economic managers led by Dominguez took the President’s cue and weighed the extent of the contagion first before making any decision on lifting the lockdown.

“The problem was Pernia made his case too strongly,” placing him in an awkward position which prompted his exit, the House leader said.

Earlier this week, Pernia said Neda was crafting the plans necessary to revive both consumer and business confidence after the COVID-19 lockdowns were dismantled.

“We’re still with phase one: rebuilding consumer confidence; phase two: restoring business optimism; phase three: adapting to a new normal—recover as one. There will be a dashboard for each phase. Phase one dashboard to be completed on April 16,” Pernia told the Inquirer.

In and interview with DZMM radio on Thursday, he said he supported a “calibrated” lifting of the enhanced community quarantine after April 30.

Reacting to Pernia’s position, Dominguez said: “Any recommendation should include a clear analysis of the trade-offs involved.”

In a statement, Albay Rep. Edcel Lagman said Pernia had “good reasons” to quit his post.

“[He] was being preempted by a ‘few colleagues’ in the Cabinet in developing a post-pandemic economic policy to rescue the depressed economy and distraught Filipinos,” he said.

At the time of his resignation, Pernia chaired the technical working group in the Inter-Agency Task Force on the Management of Emerging Infectious Diseases, which was was drafting an “anticipatory and forward planning blueprint for a post-COVID-19 scenario,” according to Lagman.

Pernia, according to the House leader who spoke to the Inquirer, worried about the devastating impact on the economy of the one-and-a-half-month Luzon lockdown, as it shuttered entire industries and left hundreds of thousands without jobs.

The House leader said Pernia appeared to agree with the position of business leader Joey Concepcion, the presidential adviser on entrepreneurship, who was pushing selective quarantine to allow the unimpeded movement of goods and services.

“Our suggestion is to shift from Luzon-wide lockdown to selective quarantine at the barangay level under their respective mayors’ oversight with clear rules and guidelines,” Concepcion said earlier this month.

“We need a complete economic team in these difficult times,” Salceda said, urging the President to appoint immediately a permanent replacement for Pernia.

“The position cannot be left vacant for too long, especially in this critical period. NEDA will be crucial to guiding our economic recovery efforts,” he said in a statement.

Salceda suggested that the future Neda chief be someone with “a record for economic crisis management” to send a signal “to the public and to the markets that government’s economic response will be robust and strategic.”

Chua, one of Dominguez’s key advisers, on Monday presented a P50-billion small business wage subsidy program for workers in micro, small and medium enterprises during the President’s weekly report on the national health emergency.

He had pushed hard for tax reform measures, particularly the Tax Reform for Acceleration and Inclusion law, which cut down personal income taxes and raised duties on sugary drinks, fuel and cars.

Before joining the Duterte administration in 2016, he was a senior country economist at the World Bank for four years. He has masters and doctorate degrees in economics from the UP School of Economics, where Pernia had taught. –WITH A REPORT FROM JULIE M. AURELIO