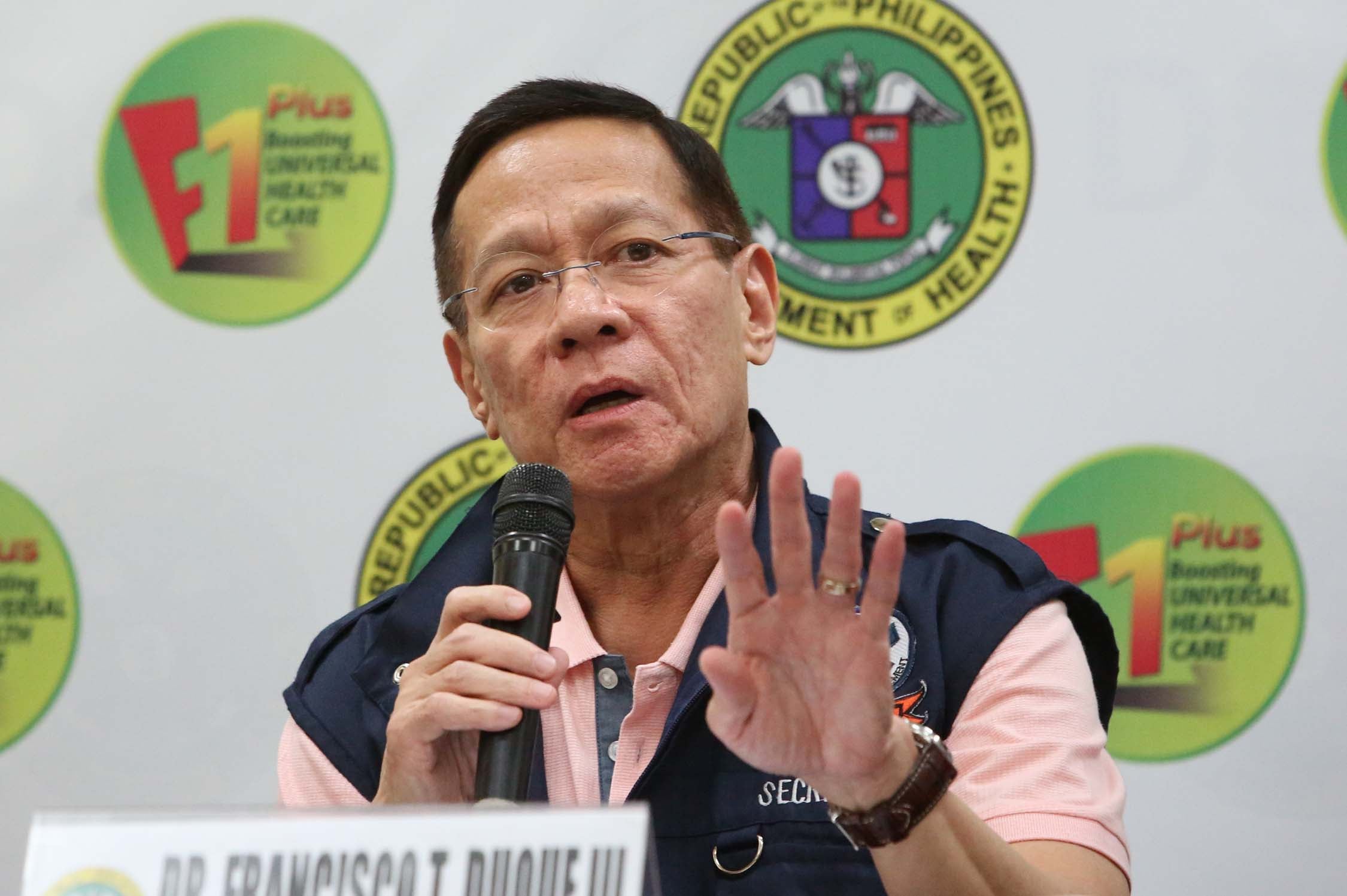 At least 14 senators signed Senate Resolution No. 362 which cited Duque’s alleged “failure of leadership, negligence, (and) lack of foresight” in addressing the pandemic.

The senators said Duque’s “inefficiency” in performing his mandate as Department of Health (DOH) secretary resulted in the “poor planning delayed response, lack of transparency, and misguided and flip-flopping policies and measures in addressing the COVID-19 pandemic that endangered and continue to endanger the lives of our healthcare professionals, other frontliners, and the Filipino people.”

“Knowing fully well the danger posed by the COVID-19 pandemic in the beginning of the year, Secretary Duque failed to put in place the necessary precautionary measures to lessen, if not at all prevent, the impact of this health crisis,” the resolution read.

The senators believe that Duque showed a “lack of competence, efficiency, and foresight bordering on negligence,” when he, among others, failed to immediately recommend a travel ban on China and even “warned of repercussions” of banning flights to and from that country during the House of Representatives’ Question Hour last January 29.

A day after that, the Philippines reported its first COVID-19 case involving a 38-year-old female Chinese national from Wuhan, the senators noted.

The lawmakers also cited the DOH’s supposed lack of coordination with the Civil Aeronautics Board (CAB) and Civil Aviation Authority of the Philippines (CAAP) which they said hampered and delayed the contract tracing for the country’s first two COVID-19 cases “possibly resulting in the failure to prevent the initial spreading of the virus.”

“Secretary Duque failed to alert the medical community and fundamentally, the public, that there were already patients admitted in health facilities exhibiting COVID-19 symptoms, insisting in his press conferences that the Philippines had zero cases of local transmission, thus exposing many Filipinos, especially healthcare workers to the dangers of this disease,” the resolution further read.

The senators also noted that the DOH drew flak for its supposed delayed release of information regarding the spike of new cases.

The senators, likewise, criticized the DOH’s “dismal failure” to provide adequate personal protective equipment (PPEs) to healthcare workers as it “poses great hazard” to the well-being of the country’s frontliners, “so much so that the Philippines has been among the countries with the highest rates of COVID-19-related infection and deaths of healthcare workers in the world.”

Duque showed “lack of foresight by not immediately stockpiling and making the kits available to the general population,” the senators said.

“Secretary Duque claimed that we have relatively ‘low’ cases of infection and in comparison to richer countries, we have done better in containing the spread of the virus,” the resolution read.

“In truth, however, we are lagging behind other nations in terms of testing capacity,8 and as of this writing, the country ranks first with the most number of COVID-19 cases in Southeast Asia despite the fact that we have yet to roll out mass testing, having tested only 38,103 individuals,” it added.

The senators also slammed the DOH for its offer of a P500-daily compensation for volunteer doctors, nurses, and nursing assistants.

“The medical community felt insulted with such little consideration in exchange for putting themselves in harm’s way,” they said.

The lawmakers, meanwhile, reprimanded the DOH for its supposed failure to “expeditiously act” in facilitating the accreditation of testing centers “which unreasonably slows public health response of (local government units).”

Lacson, one of the 14 senators who signed the resolution, said issues raised by the senators against the health chief “have commonalities as they are glaring and have bearing on the country surviving COVID-19.”

“We all agreed not to recommend any replacement. In case Sec. Duque quits, it is all up to the President is the appointing authority. We are simply for a competent Secretary of Health. Take note: not more competent, but simply a competent one at the helm,” he said in a statement.

“Having said that, the resolution does not involve the President. It is virtually an appeal – demand if you will, to Sec. Duque to resign and the reasons are stated in the resolution. It is his call,” he added.

While only 14 senators signed the resolution, Lacson said two others “expressed support but begged off from signing.”

Villanueva, meanwhile, said the senators have “nothing personal” against the health chief.

“It (resolution) is what it is, nothing personal we just badly need a public health expert to lead,” he said in a message to reporters.

Angara, one of the signatories, said that the government’s response to the crisis “needs to be better.”

“Fourteen (senators) signed/filed and I am one of them. Whether he is removed or not, the status quo cannot continue if we want to defeat the virus,” he said in a statement.