Experiences of emptiness: Postcards from 16 cities across the world 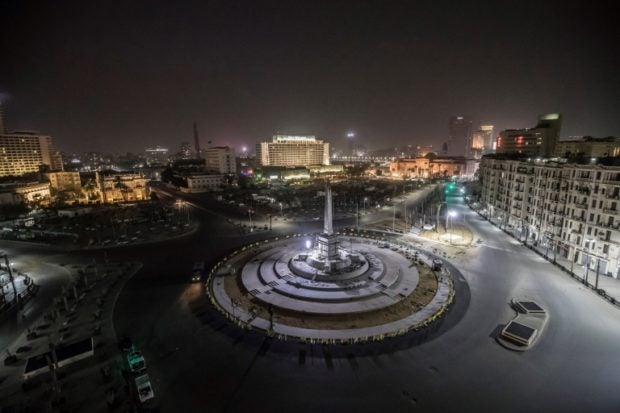 A picture taken on on March 25, 2020 shows Egypt’s landmark Tahrir Square in the capital Cairo on the first evening of a two-week long night-time curfew imposed by the authorities to contain the spread of the novel coronavirus. Image: AFP/Khaled Desouki

Deserted, silent, transformed; from Rome’s historic Piazza Navona, to Baghdad’s symbolic Tahrir Square. With over half of humanity confined to their homes, AFP TV journalists set up cameras in 16 cities across the world.

Faced with the emptiness, they captured the mood, some emotional, worried or surprised, of the rare passers-by they encountered at 16:00 (4:00 p.m.) local time on Wednesday.

Normally the Italian capital’s Piazza Navona would be buzzing with tourists, artists and musicians, while Arpoador beach in Rio de Janeiro is a magnet for surfers.

Crowds of all nationalities congregate day and night at Berlin’s iconic Brandenburg Gate while in Nigeria’s megacity, Lagos, life in the Ikoyi neighbourhood is always busy, as it is on Hollywood Boulevard, Los Angeles.

But since the eruption of the COVID-19 pandemic and introduction of restrictions to stem its spread, tighter in some countries than others, life in these cities, as in Tokyo, Jerusalem, Panama City, New York, Johannesburg or even Niagara Falls in Canada, is very different.

For some, the void has left a sense of loss, such as Italian tour guide Marta Rezzano, who told AFP she missed “living the city everyday.”

“I miss no longer being able to show it, to talk about it, to walk up and down the streets, tread through its squares. It’s really sad, yes.”

Others no longer recognize regular haunts.

“It changes the face of Arpoador a lot,” said 31-year-old Brazilian businessman Diego Reis de Aguiar, a regular surfer at the beach, of the social distancing measures.

Etienne Klein, a philosopher of science from the French Alternative Energies and Atomic Energy Commission (CEA), said the feeling of emptiness had a “metamorphosis effect.”

“These places look exactly like themselves and yet are no longer completely recognizable; the human presence is a part of them… and when they are emptied, it gives the impression of them being reduced to their mineral components.

“Their true nature includes us.”

For some, it’s a question of survival. In Lagos, street vendor Solomon Ekelo, 27, continues to roam the streets because he’s hungry.

“It’s not easy for us, who are in the streets. We don’t have a house, no home. No place to work. Even no place to sleep, so it’s very difficult,” he said.

Bearing the isolation is not always easy, as Chinese pensioner Wang Huixian has discovered.

Although the 57-year-old, whom AFP met near the Forbidden City in Beijing, can again go dancing in the squares with her friends, albeit keeping three meters’ distance, travel to see her grandson is still out, “because they live far away,” she said.

Others worry about the future, like German osteopath Bettina Kohls, 41, who said there were “hardly any patients” now at her practice.

“The Olympics is postponed too. This happened when we were thinking the Japanese economy will be really taking off, so this worries me,” he said.

But the emptiness can also be a chance to discover another side to the city.

“One of the things which has changed here, which I’d never seen until today, is the grass between the cobblestones in the square,” said Rezzano, in Piazza Navona.

“It’s unreal, as if nature were taking possession of the monuments.”

Klein, the philosopher, said that “these places are not empty, but scooped out,” as although not fulfilling their usual purpose, they are still full of other things that are less visible when full.

Having time on our hands can also have unexpected benefits, as South Korea’s Moon Byeong-seol, 28, from Bucheon City, west of Seoul, has discovered.

“Staying home has been beneficial because my cooking skills have improved a lot and I’ve had a lot of time to think about myself and my future,” the drama student told AFP at Gwanghwamun Plaza.

For Fabrice Kebour, 56, of France, however, the feeling is less secure. “It’s like being on a raft in the eye of the storm,” the light designer said, walking in Paris’ Montmartre district.

“We are beginning to take the time to stroll while all around me, us, it’s chaos.”

And, for others, confinement is nothing new.

Muawiya Agha, a 33-year-old hospital worker, from Sarmin, in Syria’s Idlib province, compared confinement under coronavirus to life in his war-torn country.

“Confinement in other countries, that’s what we have lived,” he said.

“We lived it when the regime forces were bombarding our region, we lived it retreated in to cellars underground, we lived it in houses whose owners were killed, without seeing our friends, our family, for days and weeks.” JB