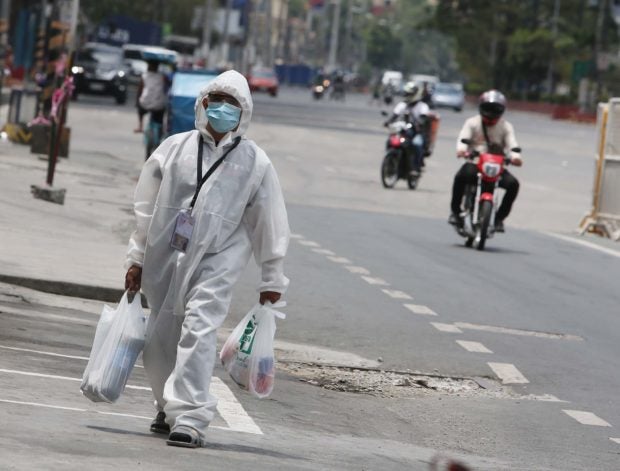 LATEST IN STREET FASHION A man out for groceries is cocooned in a personal protective suit, a precautionary measure to minimize transmission of the new coronavirus. Without mass testing, people would just have to be extra careful, health officials say. —MARIANNE BERMUDEZ

MANILA, Philippines  — The first localized, targeted COVID-19 mass testing began in Valenzuela City on Saturday, with the procedure being administered for free to medical front-liners, returning overseas Filipino workers and residents being monitored for coronavirus symptoms.

The family members of two nurses earlier found positive for the virus were among the first to be tested using South Korean-made kits approved by the Food and Drug Administration, Mayor Rex Gatchalian said in a press briefing.

The samples taken will be subjected to confirmatory tests at The Medical City (TMC) in Pasig City. The hospital can accommodate a minimum of 25 samples from Valenzuela in a day, and can produce results two days from the time the samples are submitted, Gatchalian said.

The tests were the result of an agreement reached by the Valenzuela City government and the private hospital on April 3. At that time, the TMC was only one step away from being accredited as a laboratory by the Department of Health (DOH).

Sen. Sherwin Gatchalian, the mayor’s brother who also helped facilitate the testing in Valenzuela, said local government units must rise to the challenge “in the next 18 days (the remaining period of the Luzon lockdown) to ramp up the volume of mass testing all the way up to 10,000 tests a day.

“That is a very important milestone because if we can’t do this, we [can] not assess the real situation of the country,” the senator said, noting that the limited number of DOH-accredited laboratories remained a problem.

Meanwhile, Quezon City, which so far has the largest number of COVID-19 cases among local government units, is also set to begin community-based testing next week.

The local health department chief, Dr. Esperanza Arias, said the city would be using the initial 1,300 test kits provided by the DOH.

After this, the city government will get an additional batch of 1,500 test kits through a partnership with the Philippine Red Cross, she said.

According to Dr. Rolando Cruz, head of the department’s epidemiology and surveillance unit, only people showing COVID-19 symptoms would be tested in Quezon City.

“We will test people with cough and colds, influenza-like symptoms or those experiencing flu and acute respiratory infection,” Cruz said.

Those who will test positive, along with residents from urban poor communities who are monitored for symptoms, will be referred to the city’s temporary isolation sites that were set up to relieve hospitals that have already reached full capacity.

The Quezon City testing centers will be equipped with swab booths that will limit the need for personal protective equipment. The samples will then be sent to the Research Institute for Tropical Medicine (RITM) for testing.

Arias said the results can be expected in two to three days.

“Right now, only RITM runs the tests, that’s why it will take that long. But we are setting up partnerships [also] with Red Cross, St. Luke’s [Medical Center] and the Lung Center [of the Philippines],” Arias said.