Pope hails priests, health workers as ‘the saints next door’

VATICAN CITY  — Pope Francis on Holy Thursday hailed priests and medical staff who tend to the needs of COVID-19 patients as “the saints next door.” 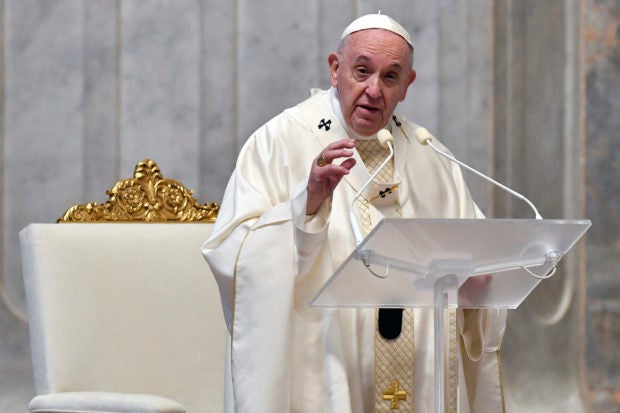 Pope Francis delivers his message during a Mass for Holy Thursday, inside St. Peter’s Basilica at the Vatican, Thursday, April 9, 2020. Francis celebrated the Holy Week Mass in St. Peter’s Basilica, which was largely empty of faithful because of restrictions aimed at containing the spread of COVID-19. The new coronavirus causes mild or moderate symptoms for most people, but for some, especially older adults and people with existing health problems, it can cause more severe illness or death. (Alessandro Di Meo/Pool Photo via AP)

Francis celebrated the Holy Week evening Mass in St. Peter’s Basilica, which was kept off-limits to the public because of restrictions aimed at containing the spread of the new coronavirus.

The same precautions forced the pope to forego a symbolic ritual traditionally observed on the Thursday before Easter — washing the feet of others in a sign of humility.

Last year, he performed the ritual washing on the feet of 12 inmates at a prison near Rome. The ritual re-enacts Jesus’ washing the feet of his 12 Apostles at their last supper before he was crucified.

The pope began his off-the-cuff homily by honoring the memory of priests who gave their lives in service to others, singling out those who died after tending to sick people in Italy’s hospitals. Italy has the world’s highest death toll from the coronavirus pandemic.

“These days, more than 60 in Italy have died, after giving attention to the sick in hospitals,” he said. “Also doctors, nurses. They are the saints next door.”

Looking weary and speaking in a subdued voice, Francis also expressed dismay that priests have been insulted or slandered because of scandals in the Catholic Church involving pedophile members of the clergy.

Addressing his remarks to priests worldwide, Francis said: “Today I carry you in my heart and I carry you to the altar.”

“Ugly things are said to (many priests), in reference to the drama we have experienced with the discovery of priests who did ugly things,” the pope said. “Some tell me they cannot leave their home wearing the clerical collar because they’re insulted.”

Earlier in the week, Australia’s highest court dismissed the convictions of Cardinal George Pell for allegedly sexually abusing children. A former top papal aide, Pell spent 13 months in prison in his native Australia. Francis didn’t mention him or cite a specific case in his remarks.

Francis said, speaking of priests, bishops and himself: “Don’t forget to ask forgiveness and learn to forgive.”

Holy Week ceremonies leading up to Sunday’s Easter Mass have been badly disrupted by the coronavirus crisis.

The torch-lit Way of the Cross procession at Rome’s Colosseum on Good Friday is a traditional highlight that normally draws large crowds of pilgrims, tourists and Romans. But this year, like all public religious gatherings in locked-down Italy, it has been canceled.

Instead of presiding over the procession at the ancient arena, Pope Francis will lead the Good Friday ritual, which recalls the suffering of Jesus before and during his crucifixion, in a night-time ceremony closed to the public in St. Peter’s Square.