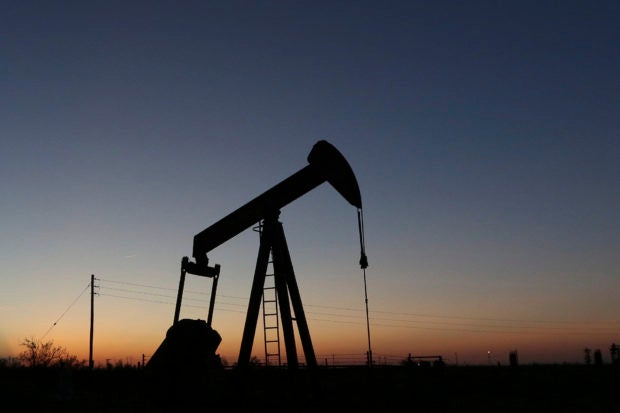 In this June 11, 2019, file photo a pump jack operates in an oil field in the Permian Basin in Texas. The world may be heading into an oversupply of oil, and that possibility is hanging over members of the OPEC cartel, which discussed this week decisions whether to further cut production to boost prices. (Jacob Ford/Odessa American via AP, File)

VIENNA, Austria — Top oil producers started a crucial meeting on Thursday to discuss a possible cut in output after a collapse in demand due to the coronavirus and a Saudi-Russian price war caused the market to crash.

The video conference meeting began shortly after 1440 GMT between the Organization of the Petroleum Exporting Countries (OPEC), its OPEC+ allies including Russia and other key non-members.

The meeting is seen as the best chance of providing support to prices which have been wallowing near two-decade lows.

Experts warn that without concerted action the commodity risks a steep sell-off.

At the beginning of the meeting, OPEC Secretary General Mohammad Barkindo warned that the rapid changes wrought by the virus meant the industry’s “supply and demand fundamentals are horrifying”.

“Our industry is hemorrhaging; no-one has been able to stem the bleeding,” Barkindo said, bemoaning companies already filing for bankruptcy and tens of thousands of jobs that have been lost.

Algeria’s Energy Minister Mohamed Arkab also warned of “an intolerable free-fall” in the market, according the APS agency.

Thursday’s meeting intends to conclude an agreement to cut production by between 10 and 15 million barrels per day, Kuwait’s Oil Minister Khaled al-Fadhel said in an interview with the Kuwaiti Al-Rai daily published Thursday.

Late Wednesday, a spokesman for the Russian energy ministry told the TASS agency that Moscow was “prepared to cut 1.6 million barrels a day,” which would be the equivalent of 14 percent of Russia’s production in the first quarter of 2020.

Kremlin spokesman Dmitri Peskov in a press briefing on Thursday declined to give details, only saying Russia was in favour of “coordinated action to stabilise the global oil market”.

“The extraordinary producing-countries meeting is the only hope on the horizon for the market that could prevent a total price collapse,” said Bjornar Tonhaugen, head of oil markets at Rystad Energy.

Saudi Arabia will on Friday host a separate virtual gathering of energy ministers from the G20 group of major economies in a similar bid to ensure “market stability.”

Oil prices have slumped since the beginning of the year as the COVID-19 pandemic sends large parts of the planet into lockdown and brings the global economy to a virtual standstill.

Compounding the problem, Riyadh and Moscow have both ramped up output in a bid to hold on to market share and undercut US shale producers.

“Saudi Arabia and Russia have been extremely clear that they will cut production if — and only if — other major oil producers join in as well,” said SEB oil analyst, Bjarne Schieldrop.

However, there are worries about the participation of US producers.

The US is battling to breathe new life into its shale industry, which has transformed the nation into the world’s top producer, but which cannot sustain its high cost base as prices collapse.

Yet its oil sector appears reluctant to trim production, having extracted a near-record 13 million barrels per day in the final week of March. This fell to 12.4 million bpd last week.

At the same time, the global supply glut — already weighing on oil markets before the new coronavirus crisis — has stretched oil storage capacity to its limits, forcing many producers to scale back output.

US President Donald Trump on Wednesday told reporters that he wanted to save jobs.

“Obviously for many years I used to think OPEC was very unfair… I hated OPEC… But somewhere along the line that broke down and went the opposite way,” he said.

In his opening statement to the meeting carried by the Rossiya 24 channel, Russian Energy Minister Alexander Novak welcomed the presence of several nations outside the OPEC+ alliance, namely Canada, Norway, Argentina, Colombia, Egypt, Indonesia, Chad, Ecuador and Trinidad and Tobago.

The International Energy Agency warned Monday that the world is set for its first annual decline in oil consumption in more than a decade because of the coronavirus pandemic.

The outbreak has shut down large swathes of the global economy, including key sectors such as air travel, manufacturing and retail.

The global oil glut could reach 25 million bpd in April, according to Rystad Energy.