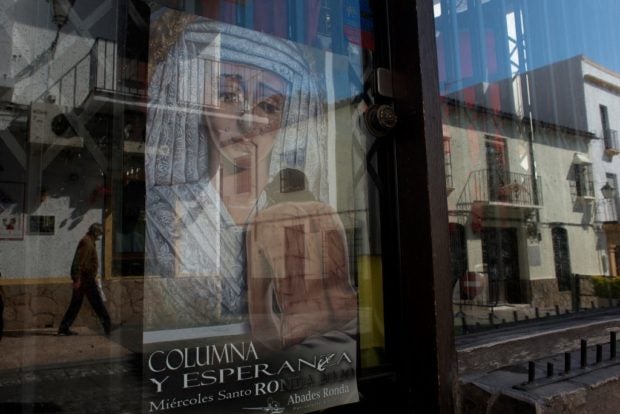 A man wearing a protective mask walks past a poster of the Holy Week on April 7, 2020, in Ronda, as Holy Week processions were cancelled during a national lockdown to prevent the spread of the COVID-19 outbreak. Photo by JORGE GUERRERO / AFP

MADRID — In the week leading to Easter Sunday, hundreds of colorful processions featuring penitents in cone-shaped hoods and centuries-old religious floats traditionally flood the streets of villages and cities across Spain.

But with a nationwide lockdown in place to curb the spread of COVID-19, Spaniards are finding ways to mark Holy Week from their homes, by blasting religious music from their balconies or viewing videos of last year’s parades.

In the western city of Salamanca, the association of religious brotherhoods that organizes processions is posting pictures on social media of religious icons that would normally be paraded through the streets at the hour that would have taken place.

“And on our YouTube channel we are posting a video of the procession from last year,” association president Jose Adrian Cornejo told AFP.

There is one part of the processions that can still go ahead — the singing of “saetas”, short, flamenco prayers sung from balconies which are especially popular in the southwestern region of Andalusia.

Saetas are usually sung as effigies of Jesus Christ and the Virgin Mary are carried past, but this year they are being performed to empty streets.

Type in “saetas of confinement” on YouTube and several events come up, including one by Alex Ortiz in Seville — which is not staging Easter processions for the first time since 1933 —  who sings of a “sad spring” without “drums or bugles” in the streets.

Pablo Murillo, a Catholic father of four, said he was celebrating Holy Week with “more seclusion”.

He was supposed to take part in a Palm Sunday procession but instead listened to the traditional “marchas” — special musical compositions featuring wind instruments and drums that accompany the floats — at home with his sons.

“My oldest who is 12 puts the speakers in the bathroom, and takes a shower while listening to the Holy Week ‘marchas’,” Murillo said.

He lives near Seville’s largest hospital and every night many neighbors blast “marchas” from their balconies after applauding healthcare workers at 8:00 pm, as people are doing across Europe.

Some people have violated the lockdown rules to celebrate Easter, meanwhile.

In Puerta de Segura, a small town of whitewashed houses in Andalusia, several people left their homes to imitate a procession, with one man carrying a drum and a woman wearing a blanket wrapped around her head like the veils depicted in the statue of the Virgin Mary, images on Spanish TV showed.

In the nearby town of Porcuna nine women dressed in black and carrying candles walked through the streets, while in the northern city of Palencia two men dressed in a tunic and hood held a mock procession by carrying an “icon” made of toilet paper rolls.

Police have joined in on the act. In Seville, two municipal police cars drove slowly in front of a church, stopping at times before moving on just like Holy Week floats do, to the tune of religious music.

With processions called off, many religious brotherhoods have focused on helping fight the coronavirus pandemic that has claimed more than 14,500 lives in Spain, one of the highest tolls in the world.

Pablo Alen of Seville’s Carreteria brotherhood said it would take a “relatively big” economic hit this year, because it will not collect any donations from participants during the traditional Good Friday parade.

With less money coming in the brotherhood’s priority is to focus on its charity work such as a soup kitchen, so it will postpone planned restorations of its religious artworks, he added.

“There are people who are asking for help, who are really struggling,” Alen noted.