SINGAPORE — Migrant workers in Singapore are living in fear following a surge of coronavirus infections in their dormitories where they say cramped and filthy conditions make social distancing impossible.

The city-state, which is battling a worsening outbreak, this week quarantined four large dormitory complexes housing tens of thousands of mostly South Asian workers, where more than 200 cases have so far been detected.

Infections have also been recorded in a handful of other facilities.

One worker from Bangladesh, who lives in a dorm where there are several known infections but has not yet been locked down, told AFP social distancing to halt the spread of the virus was not possible.

“One small room with 12 people living together… how can we make social distance?” the laborer said in English, on the condition of anonymity.

He said hygiene standards were poor and workers were forced to use a communal cooking area and bathroom.

“We know the virus character, how this is spread — so if this living condition continue I am very worried,” he added.

At least one dorm had overflowing toilets and rooms infested with cockroaches, the Straits Times newspaper reported, casting a harsh spotlight on what critics claim is the disgraceful treatment of foreign laborers in wealthy Singapore.

The huge dormitories mostly house construction workers who typically earn about $400 to $500 a month building the city-state’s glittering skyscrapers and shopping malls.

A Bangladeshi man in one of the quarantined dormitories said workers were increasingly concerned about the growing number of asymptomatic cases.

“Definitely we all are worried,” he told AFP, also speaking anonymously.

“Since last few days, we already got news that there are so many people affected without any symptoms.” 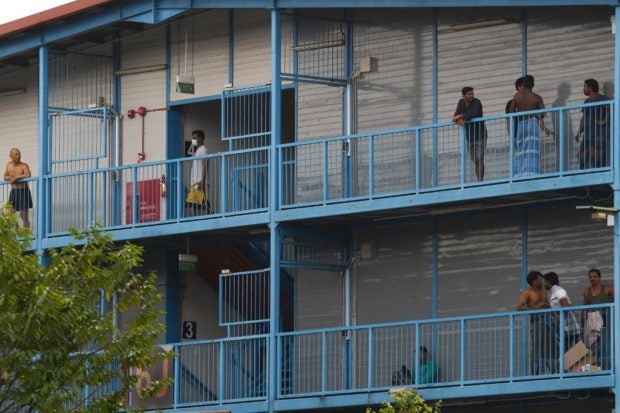 This file photo taken on April 6, 2020 shows foreign workers hanging out along the corridor of the S11 Dormitory @ Punggol, where there are numerous cases of individuals with the COVID-19 novel coronavirus in Singapore. Migrant workers in Singapore are living in fear following a surge of coronavirus infections in their dormitories where they say cramped and filthy conditions make social distancing impossible. Photo by Roslan RAHMAN / AFP

There are about 280,000 migrant construction workers in Singapore who mostly live in self-contained dorms, with shops and other facilities on-site. They are often located in less desirable parts of the city, meaning they mix little with Singaporeans.

After reports emerged of unsanitary conditions at one of the quarantined dorms, the manpower ministry said it was working to improve the situation.

Caterers are providing meals to workers in lockdown and cleaning services have been increased.

A task force involving government officials, police and the armed forces has also been set up to provide support to foreign workers and dormitory operators.

The manpower ministry said it will “continue to keep a close eye on the dormitory conditions and will intervene proactively to ensure standards”.

But Amnesty International warned quarantining workers in close proximity could be a “recipe for disaster”.

“Migrant workers living in crowded quarters, without opportunities to self-isolate and protect themselves, are at particular risk of exposure to the virus,” said Rachel Chhoa-Howard, Amnesty’s Singapore researcher.

Alex Au, vice president of migrant rights group Transient Workers Count Too, called on the government to temporarily house some workers in other locations such as army barracks.

“We fear that if the density of the dorms are not lowered… if the men are not thinned out, infections in many of the dorms will rise,” he said.

Singapore has reported more than 1,600 virus cases including six deaths, relatively low by global standards, and has won praise for its handling of the outbreak.

The infections at the dorms and the poor conditions have sparked soul-searching in Singapore about the treatment of foreign laborers, who have played a key role in the city-state’s dramatic transformation from a gritty port into an ultra-modern financial hub.

Writing on Facebook, veteran Singapore diplomat Tommy Koh said it should be a “wake-up call to treat our indispensable foreign workers like a first world country should, and not in the disgraceful way in which they are treated now”.

The post was flooded with supportive comments, including one that asked: “Is this how we treat the very people who have built our city, our home?”